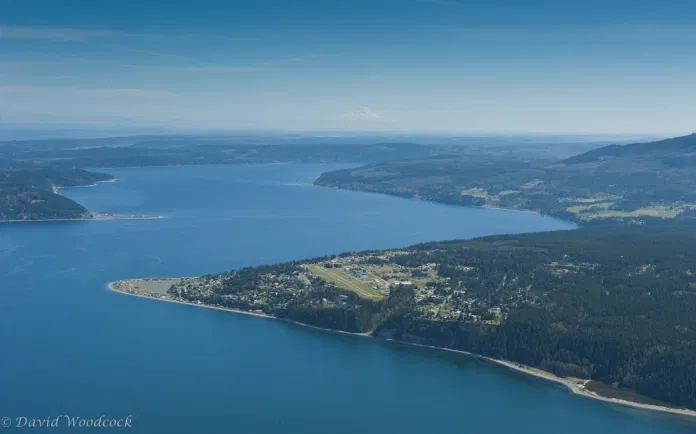 Port Townsend, where I live, is surrounded by state parks.  From Point Hudson, we look into at least five: Fort Worden and Fort Casey to the east, Fort Flagler, Mystery Bay and Old Fort Townsend to the south.  And it’s a few minutes drive to Anderson Lake, Shine Tidelands or Sequim Bay.

But our truly mondo park is virtually unknown.  At 2,800 acres, Miller Peninsula State Park is larger than all those others combined – a sprawling forest of Douglas fir and cedar with rustic trails, more than three miles of high-bluff waterfront and stunning views of Protection Island and Dungeness Spit.

All this on our doorstep.  The views from Cape George include much of that lovely shoreline, yet even most locals are unaware that it is mostly public park.  On a recent sunny Saturday, I biked some seven miles through quiet forest and encountered one small group of hikers and a couple of fellow trail bikers.

Eventually, this gem on Discovery Bay is destined to be discovered.   Miller is at the top of the state’s list for development. More than a decade ago, State Parks convened public meetings to discuss longterm plans with hopes of opening as early as 2013.  But those plans got pushed to a back burner with the recession, and Covid economics are likely to keep it there indefinitely.

But it’s there – a 30-minute drive from Port Townsend via Highway 101 and Diamond Point Road.  Don’t expect roads, campgrounds, electrical hookups or RV sites.  But there are miles of accessible, well-signed trails catering to hikers, bikers and equestrians.

Ancient forest it is not. More than a century ago, thousands of ancient fir, cedar and spruce were logged out to feed area sawmills, including the huge Discovery Bay Mill near Gardiner. Today’s understory includes enormous cedar stumps as reminders of what it once was.

In the 1970s, the Clallam PUD proposed to build a nuclear power plant on the peninsula. Fortunately, that plan was abandoned, thereby escaping the financial disaster that befell similar nuclear projects around the state a few years later.

Meanwhile, the evergreen forest was coming back, albeit slowly because of the low rainfall. Then, 30 years ago, Miller Peninsula almost became a destination golf resort.   In 1990, the Japanese megacorporation Mitsubishi teamed with Northwest developers to negotiate the purchase of about 650 acres of forest and shorelines for a $100 million resort that would include a lodge, 100 cabins or condos and two major golf courses.  The developers were drawn by the gentle terrain, relatively sunny climate and five-star views across the Strait of Juan de Fuca to the islands and Mount Baker.

It seemed to make sense at the time. Mitsubishi was investing heavily in American real estate, including landmarks like Rockefeller Center and California’s Pebble Beach golf course. A resort would draw jobs and tourist dollars to the regional economy, and proceeds from the sale would provide the money to develop the rest of the park – win-win economics, right?

But the idea encountered stiff opposition from wildlife advocates, and the Japanese economy plunged into recession, taking the golf resort with it.

Since then, the peninsula has been all but forgotten, its second and third-growth evergreens aging gracefully into a high canopy over a carpet of bracken fern, salal and moss.  Even a few years ago, it was accessible only by bushwhacking overgrown trails where it was easy to lose one’s way, which I did more than once.

But State Parks, operating out of their Sequim Bay office, hasn’t forgotten the park.  There are no public roads, but they have improved the trails, signage and trailheads with parking. And, when the state budget returns to normal, there will be more.  Park officials describe their vision as “nature within reach,” with a rustic lodge on a small footprint, leaving the vast majority of the park to wildlife, hikers and bikers.

Before you go, download a trail map from the State Parks site, and make sure your phone is fully charged.  You’ll be glad to have your GPS. To get there, take 101 west, then a right at Diamond Point Road.  Drive a mile or so north where the road takes a 90 degree turn to the east and look for the well-signed trailhead with ample parking and a restroom on the left.  Hikers and serious trailriders can start there, but less-ambitious bikers may want to pedal another half mile up Diamond Point Road to a gated road (no parking) on the left. From there, the biking is relatively easy.

The park offers gentle terrain – no steep hills.  The main trails are essentially old logging roads which have not been maintained.  It’s easy walking and dog-friendly, with no cars and far from traffic noise.  But one should expect mudholes after rainstorms and generous deposits of horse dung.

A favorite walk is the Beach Trail, which begins from Fireweed Road and wanders  down a mossy ravine, past ferned slopes and a couple of huge cedar stumps notched for sawing platforms, reminders of the ancient forest it once was. The trail leads about a half mile down to a quiet, cobbled beach, negotiable except at high tide, with views of Protection Island and the strait — a perfect spot for a picnic.

So try it.  But please, no Facebook photos.   Let’s keep this park to ourselves while we can.

This story originally appeared in Rainshadow Journal, a new website based in Port Townsend.

Ross Andersonhttps://rainshadownorthwest.com/
Ross Anderson is a founding member of the Rainshadow Journal collective. He retired to Port Townsend after 30 years of journalism at the Seattle Times.
Previous article
Time To Revisit The Way We Elect Seattle City Councilmembers?
Next article
Covid Pushes Arts To Innovation. Will That Happen Here?