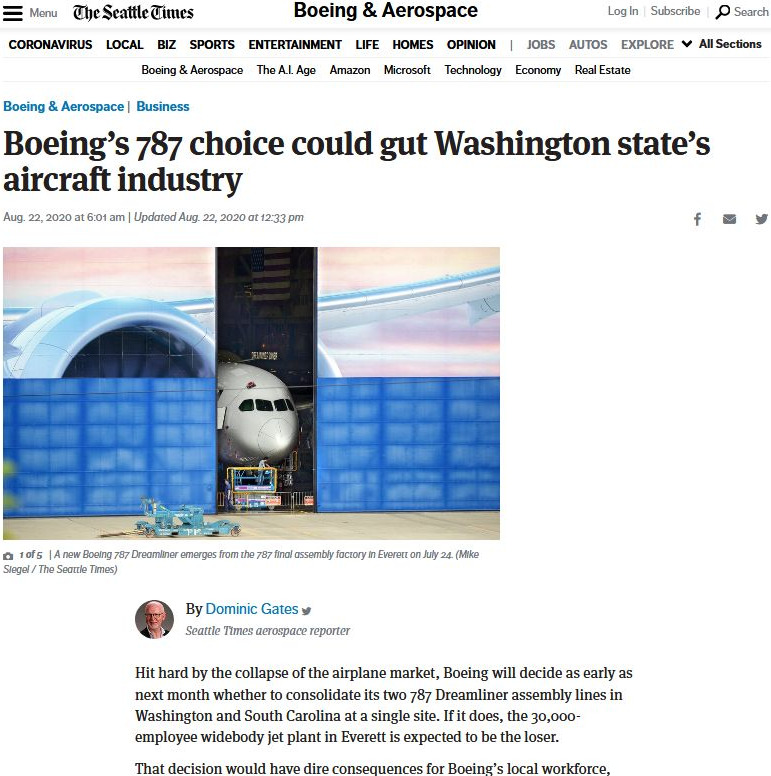 One More Thing To Worry About: Boeing Jobs to South Carolina?

Dominic Gates, the sterling aerospace reporter for The Seattle Times, doesn’t quite raise his voice to the scream that his deeply reported story suggests. He calmly looks at the evidence that Boeing may be about to shut down its huge Everett plant, employing 30,000 workers. The reason? Shifting the 787 assembly (now just three per month in Everett) to the other place that is making these planes, North Charleston, S.C. Such a move would essentially gut Puget Sound’s aerospace industry.

Boeing is reeling, owing to the 737-MAX disaster and the steep drop in orders for its planes due to the pandemic recession. It was always thought that the 787 might end up at one plant, the one in lower-labor-cost South Carolina. And it was always thought that the next generation of planes would be engineered and built at the Payne Field facility, the largest building in the world.

Analysts agree that to stay competitive, Boeing has to build that new plane, “likely a plane that’s a size bigger and more capable than Airbus’s runaway success, the A321.” They further agree that the currently troubled company isn’t likely to do so, at least soon. And the loss of Boeing’s crack engineering talent during the hiatus would be another big problem.

The story also examines the likelihood of a bitter labor battle. In the 2013 debate about providing incentives to keep the 787X in Puget Sound, the union agreed to pension caps, provoking a strong backlash in the union and taking away their ability to negotiate such concessions.

So let’s review the economic headwinds. China trade endangered. Amazon slowing Seattle expansion. Recession. Anti-business majority on the city council. Starving state and city budgets. The pandemic. Bridges falling down. An embattled Seattle mayor. No real “Senator from Boeing.” An Exodus from Downtown. Congress turning its guns on tech companies. Tourism disrupted. Seattle’s quality of life attractions, such as arts, on life-support. A housing market that has outpriced itself.

David Brewster
David Brewster, a founding member of Post Alley, has a long career in publishing, having founded Seattle Weekly, Sasquatch Books, and Crosscut.com. His civic ventures have been Town Hall Seattle and FolioSeattle.
Previous article
Riposte to Peggy Noonan: Did you Watch the Same Convention I did?
Next article
American Migration: Where People Are Moving