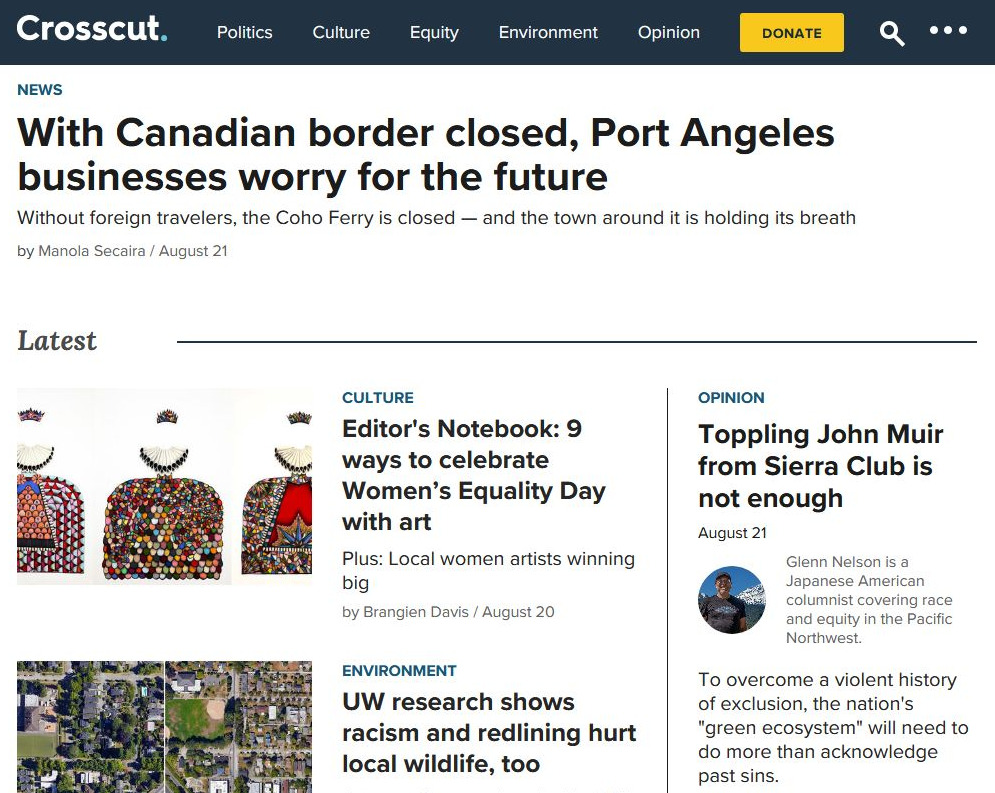 Crosscut’s News Staff and the Changing Composition of Local Newsrooms

To its credit, Crosscut.com, the online media site that is part of KCTS-9, has made public demographic information about its 31-person editorial staff (support staff and reporters and editors). According to their count, 40 percent of staffers are people of color (Asian and Hispanic, but no Blacks or Native Americans), 60 percent are female, 44 percent are relative newcomers (living here five years or less), and 63 percent are under 40 years of age (youth-sourcing holds down salary costs).

Apparently the goal is to come as close as the newsroom can to reflecting demographics of the region or city. That’s a complicated, tail-chasing task, raising questions about political balance, geographic spread, sexual orientation, and religious affiliation. One suspects that few religious conservatives are in the public broadcast newsroom, and that matching those numbers with society-at-large is an irrelevant goal.

I’m reminded of some methods of hiring newsies from the benighted past. When Stim Bullitt was running KING Broadcasting in the 1960s, he honored his Yale education by conducting interviews in the Yale Club of Manhattan. He preferred Ivy Leaguers and also people who had not taken journalism courses. One former colleague of mine was thus interviewed and hired at the Yale Club. He was then sent to the KING station in Portland, where he promptly froze up for his screen test and so was shunted off to Seattle Magazine, where he was a brilliant editor.

The Seattle Times, where I also once worked, had a system of hiring folks who had proved their worth by working on nearby regional papers like the dailies in Yakima and Bellevue. This system produced and favored local journeyman reporters, and it shunned the star system. KUOW-FM, the local NPR outlet, also resisted disproportionate pay to star talent, favoring an egalitarian, “flat” structure. As for my days as editor of Seattle Weekly, 1976-97, I disfavored journalism majors and preferred history or lit majors, looked for writers who could be taught to be reporters (I would ask about novels in their desk drawers), and probed for areas of passionate interest.

Very different, for what it’s worth, are the hiring practices at tech firms like Microsoft. According to legend, applicants at Microsoft were asked a baffling question such as, “How many ping-pong balls are there in the world?” Throwing up your hands got you shown the door; intrigued enough to start solving the problem by logic and data sources got you the job. Steve Ballmer was famous for asking you to name a personal accomplishment (such as building an authentic kayak). He was only interested in how passionately and unstoppably you described this feat. Wild enthusiasm got you the job.

David Brewster
David Brewster, a founding member of Post Alley, has a long career in publishing, having founded Seattle Weekly, Sasquatch Books, and Crosscut.com. His civic ventures have been Town Hall Seattle and FolioSeattle.
Previous article
Revenge of the “Nasty” Women: We Vote!
Next article
Alaska Thaw… And A Political Earthquake?