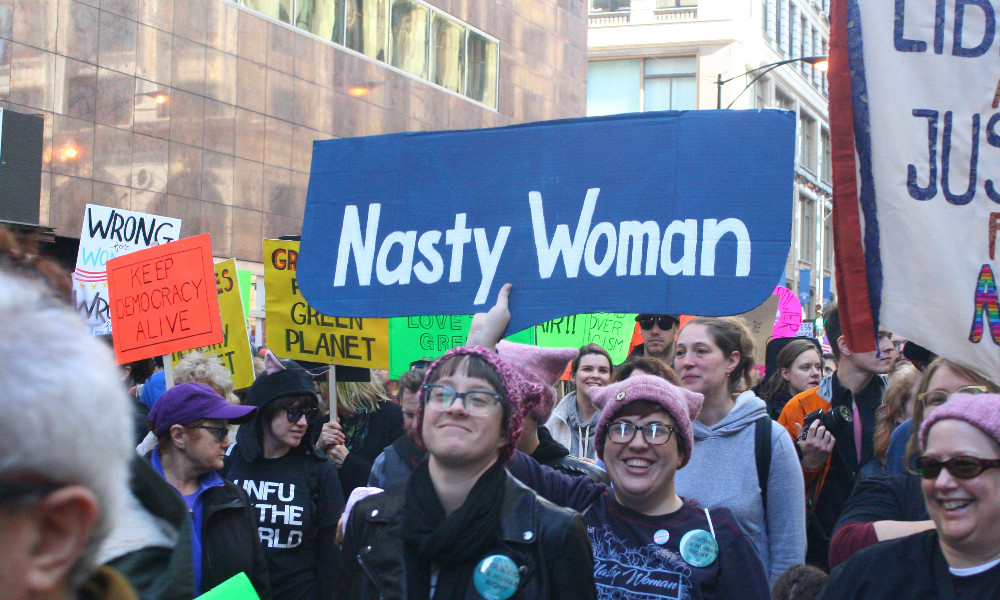 Revenge of the “Nasty” Women: We Vote!

Nasty. President Trump calls women names. He calls them “Nasty.” For many women it has become a rallying cry; there are T-shirts that proudly proclaim “Nasty Woman.”  Trump’s insults have served to unite women voters and push them forward.

In this year, 2020, when women nationally are marking the centennial of the 19th Amendment — 100 years of women voting — it looks as if Trump’s insults will continue to backfire and cost him. He seems to have sensed his lost stock with women, even among those suburban women (“housewives” in his book) that he now tries to court.

On Aug. 18, the 100th anniversary of the 19th Amendment granting women the right to vote, Trump resorted to “pardoning” Susan B. Anthony, one of the army of women who worked for suffrage. Anthony had ignored her crime (a fine for voting) and would likely have derided Trump’s cynical gesture.

A little history: The 100 years of women’s suffrage have been a mixed success. Even from the beginning, suffragists saw full equality as an unfinished cause. They proposed another amendment that would include women in the U. S. Constitution. That amendment is still languishing and is subject to Congressional action.

For decades after passage of the 19th Amendment, women voters too often echoed the votes of men, their fathers, brothers, and husbands. It wasn’t until the Ronald Reagan elections in the 1980s that a gender gap began to develop. Women voters started voting more heavily for the Democratic Party than did men.

That gap has continued to widen. And widen. The chasm has never been more apparent than today. The Pew Research Center recently found that 56 percent of women voters lean Democratic, versus the 38 percent of women who favor Republican candidates. With Black women and millennial women, numbers are even more soundly Democratic. These lopsided numbers helped power Democratic gains in the 2018 midterms.

After Donald Trump bested Hillary Clinton in the 2016 election, legions of women voters experienced profound sadness; then came rage and activism. For many the next step was to run for office. More women campaigned for local or national office in the 2018 midterm elections than at any other time in U.S. history.

The nation experienced a vast pink wave. In 2018, 102 women won races for the U. S. House, setting new records. That result challenged notions of who seeks power and who gets it. The media called it the Year of the Woman. More accurately, it should have been the year of Democratic women since the count in the U. S. House went from 64 to 89 Democratic women. Meanwhile Republican women lost seats, shrinking from 23 to 13. The midterm elections also brought a new diversity. Voters elected more women of color in 2018, sending women to Congress who looked more like the communities they represented.

But if 2018 was the Year of the Woman, there are signs that 2020 could be an even bigger year for women and for diversity. Some 243 women — 169 Democrats and 74 Republicans — have won primaries and are competing for congressional seats this fall.

Congress isn’t the only place with a bumper crop of women candidates. There also are large numbers of women running for state and local offices. In Washington, it seems likely the state house could seat 50 percent women, while the state’s upper house may be able to count 40 percent women, an incredible change from days when Olympia was an old boys’ club.

Changes in this state’s Legislature — large as they are — have lagged behind gender changes at the state Supreme Court, where women have held a majority since 2013. Various justices reflect the electorate with white, Black, Hispanic, Asian-American, African-American, LGBT, immigrant, Jewish, and disabled populations represented. At the Seattle City Council, two thirds are women.

During Trump’s years in office, the gender gap has consumed the nation. Women voters cite the president’s moves to divide the country, his ego and bullying, his disregard for the truth and his crashing failure at managing the pandemic. High on his list of faults, women condemn Trump’s misogyny and lack of respect for women.

Trump’s lexicon recalls the insults that once were hurled as an excuse for keeping women from voting more than 100 years ago. At that time, many men said “women don’t have the mental capacity to vote.” Today, as we know, Trump saves his ugliest insults for women in public life, calling them “goofy” and “wacky” and berating them as “low-IQ” and “dog-faced.” For Speaker of the House Nancy Pelosi, he has used words like “nervous,” “crazy,” and “high crime,” citing her San Francisco district.

How fitting it would be then if President Trump should get booted out of office, based primarily on the growing gender gap. A Trump loss to the Biden-Harris ticket could well become a grand, celebratory way — better than any that could have been imaged — to mark the 100th anniversary of granting women the precious right to vote.

Jean Godden
Jean Godden wrote columns first for the Seattle Post-Intelligencer and late for the Seattle Times. In 2002, she quit to run for City Council where she served for 12 years. Since then she published a book of city stories titled “Citizen Jean.” She is now co-host of The Bridge aired on community station KMGP at 101.1 FM. You can email tips and comments to Jean at jgodden@blarg.net.
Previous article
Blame Game: An End to Bipartisan Foreign Policy
Next article
Crosscut’s News Staff and the Changing Composition of Local Newsrooms