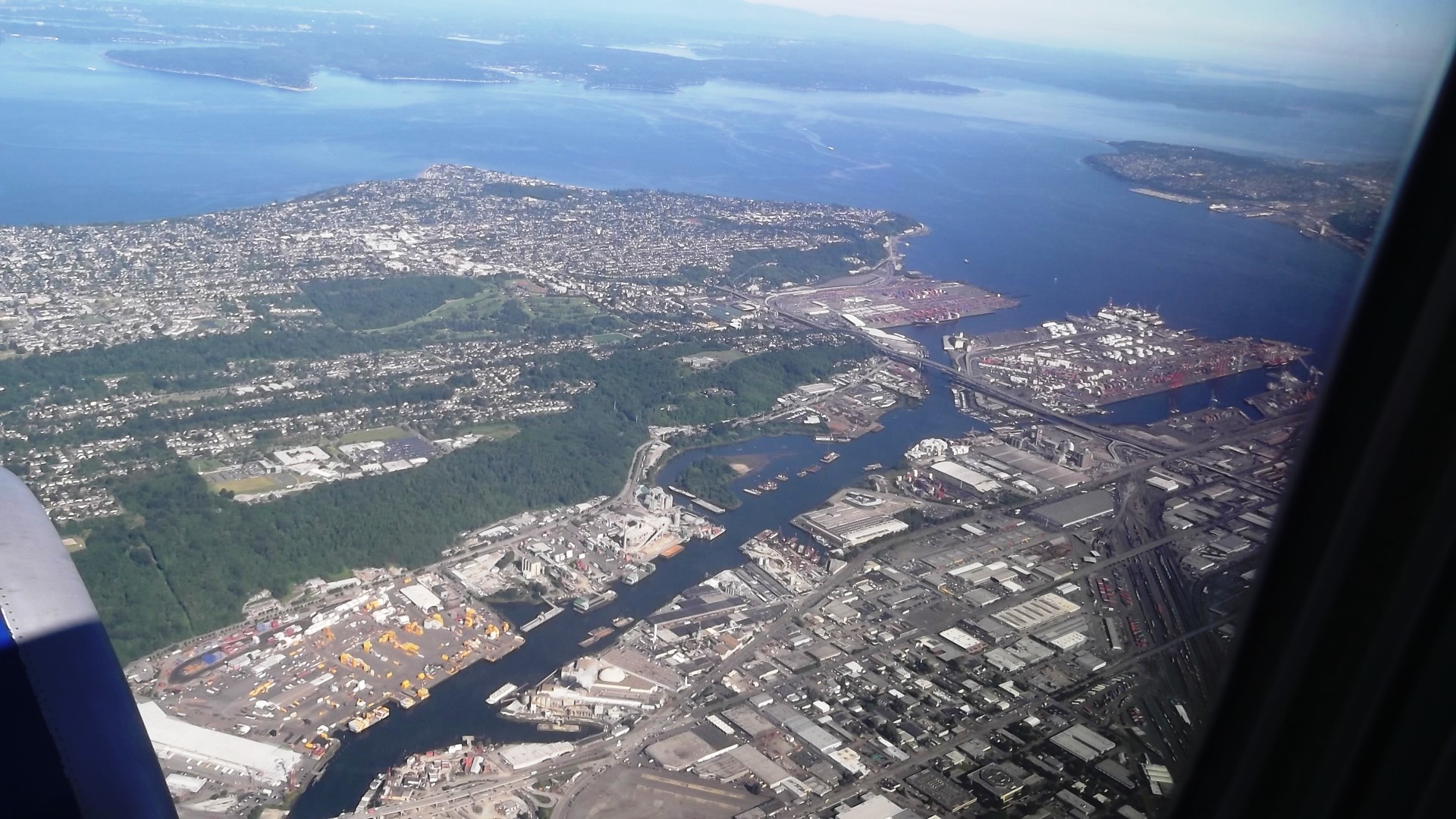 New Book: The Plundering of the Duwamish River

It’s a safe bet that most people in Seattle have never seen the Duwamish River.  It is hard to imagine the broad channels of the industrial port as part of a once-grand river system, but it is still there, although barely. Only 40% of the water that once enlivened its channel does so today. And yet the river is a seminal part of Seattle’s history, as author B. J. Cummings’ writes in her new book, Duwamish: The River That Built Seattle.

We are fortunate to read works of a younger generation of historians:  David Lewis’s Ghostland, a remarkable and off-beat take on Seattle’s rarely disclosed past; David William’s Too High & Too Steep that traces how the city altered its hilly physical environment for good and ill, and now, Cummings’ magnificent accomplishment.

Cummings is a founder of the Duwamish River Clean Up Coalition and executive director of Sustainable Seattle. She was also, from 1994-1999, a Puget Soundkeeper serving as a watchdog, advocate and protector of Puget Sound and citizen enforcer of the Clean Water Act.  Like Williams, she makes engineering hubris one of her book’s themes. Her thoughtful, holistic approach to the topic explores the motives and actions of many individuals and groups tied to the river.

She skims the hydrologic history of the river, the most complicated watershed in western Washington. That river system shaped the lives of its inhabitants.  Indeed, the river’s multiple sources, broad catchments, tributaries, distributaries and reversing flows underlay the painful history of the people at the heart of her story, the DxwdƏʔa’bš (dxw [whispered]-duw-AHBSH), “The inside people.”

They took their name from the place where, at times of high water in Puget Sound, the river reversed its flow into what is now Lake Washington, a remarkable phenomenon that shaped their relationships with neighbors near and far and gave them a unique identity.

Cummings carefully follows the lives of native people whose ancestry predates history and whose families experienced the onset of American settlement.  Many family members heeded Chief Seattle’s call to intermarry with the newcomers to ensure that both peoples could prosper in harmony.  One example was Quio Litza, the daughter of Tupt Aleut, from the noble village of Sbabadid (at Renton) and wife of a Skagit leader.  Quio Litza married Dr. Ruben Miles Bigelow, who discovered coal near Sbabadid.  After his death, she married Abner Tuttle, and their daughter, Katie, and half-brother, Miles Jr., worked for a time in the home of the influential business leader, Seattle  Judge Thomas Burke.

There Katie learned enough real estate law to become property manager for several family holdings, including land on Beacon Hill that she and her husband, Myron Overacker, purchased — land that stayed in the family for generations.

Cummings tells these stories to demonstrate that native people were as eager and able as white settlers to succeed in the new economy. This insight is underscored by the settlers’ unanimously naming their town Seattle after the man who made its foundation possible.  Although American’ ideas about land and governance differed profoundly from the native view, most native people, notably Chief Seattle, eagerly participated in the transformation of their world.

But as Americans ushered in a new economy, they also brought with them a blinkered cultural arrogance.  Requiring native people to yield their lands and move to poor reservations, distant from towns where they formerly played vital roles, led to a bitter race war that killed prosperity for a decade and corroded an embryonic racial harmony.

Once they seized the land, Americans plundered it.  Their initial forays in building railroads, cutting timber, catching fish, and breaking ground were exciting and even heroic.  The river was a cornucopia, feeding economic growth. Making homes and stores consumed most of Seattle’s prodigious lumber production. Hop farms supplied early breweries. Coal joined salmon and lumber as exports. When the wooden town burned down, river clays baked into bricks in coal-fired kilns rebuilt the city on a grand scale.

As hundreds of thousands arrived the land groaned under the burden.  To provide space for industrial expansion engineers washed Seattle’s hills into the river mouth creating Harbor Island, the world’s largest artificial island.  They straightened the Duwamish’s meandering channel and dredged waterways, obliterating the rich estuary.  Environmental sacrifice allowed frontier Seattle to blossom into a metropolis.

Cummings depicts an awful spiral.  Cutting timber increased violent flooding in the river valley.  The increase of sewage polluted lakes and rivers.  Industrial waste poisoned land and water.  To mitigate flooding, the Cedar River was redirected into Lake Washington, the White river diverted into Tacoma’s Commencement Bay.  A ship canal redirected the waters of Lakes Sammamish and Washington through the Ballard locks to Puget Sound.  Lake Washington was lowered; the Black River disappeared.

Today, only the Green River continues into the Duwamish. A dam on the Green eliminated flooding, and this engineering feat opened the rich soils of the Duwamish valley to commercial and industrial expansion.  Farming disappeared.  Byproducts of lumber, manufacturing, ship building and aerospace were dumped in abandoned coal mines and the river.

Step by step, Cummings leads us to the sad ending, and the belated efforts at salvaging the river.  In place of a pristine watershed, the Duwamish became an impoverished drain.  Immigrant groups settled where housing costs were lower, but these neighborhoods faced grave risk from heavy metals and deadly polychlorinated biphenyls (PCBs), poisoning food sources.

Then came the modern push-back. Housewives of South Park showed up at City Hall demanding that garbage fires whose soot blackened their hanging laundry be put out.  Officials tried to ignore them, but their continued protests attracted national support and new laws and regulatory agencies.

The polluters balked. Cummings documents how Boeing and the Port of Seattle sponsored reports minimizing the threat and blaming others.  The poor and vulnerable pressed suits against the powerful.  Native Americans sued Washington state to preserve fishing rights. The Duwamish Tribe, which white privilege rendered landless and unrecognized, continued to defend its people and joined other equally disparaged groups to call for justice.  The reader dares to hope.

Industry kept up its barrage. Those suffering the effects of environmental degradation should move elsewhere, they said.  Ban fishing the river and bury the poisons where they lay.  But the descendants of Italian farmers, Scandinavian and Slavic fishermen, Vietnamese, Somali and Cambodian families who fish the river to survive do not give up.

Cummings recounts how Marvin Oliver, a Duwamish, was arrested and his fishing gear confiscated by the state, repeatedly.  Oliver told his sister, Cecile, “You need to get involved.”  A housewife and mother, she got elected chairperson of the tribe and stopped the Port of Seattle’s effort to bury the river’s last meander, known to possess great archaeological significance.

She was not alone.  James Rasmussen, the great, great, great, great grandson of Topt Aleut, joined the tribal council and became a galvanizing spokesman.  Ken Workman, another council member and descendant of Chief Seattle, confronted the Environmental Protection Agency in his native language at a public meeting.,

Cummings introduces others in the gathering army of river restorers. One is John Beal, a Vietnam vet so deeply wounded by the war that doctors told him to get a hobby because he would not live long.  He chose to clean up a polluted creek behind his house and ended up restoring Hamm Creek, a Duwamish tributary—and living.  She details the work of scientists, government officials, health workers, and citizen activists who did their duty as professionals and citizens.  In one poignant episode, Buddhist monk Song Van, a survivor of the Khmer Rouge genocide, sets a candle adrift on the ravaged river.

The central narrative of the book recounts a horrific experiment in social engineering.  Cummings’ important history serves as a primer and a call to action.  Those legions of river preservers summon to mind the inspiring words of anthropologist Margaret Mead.  “Never doubt that a small group of thoughtful committed citizens can change the world; indeed it is the only thing that ever has.”