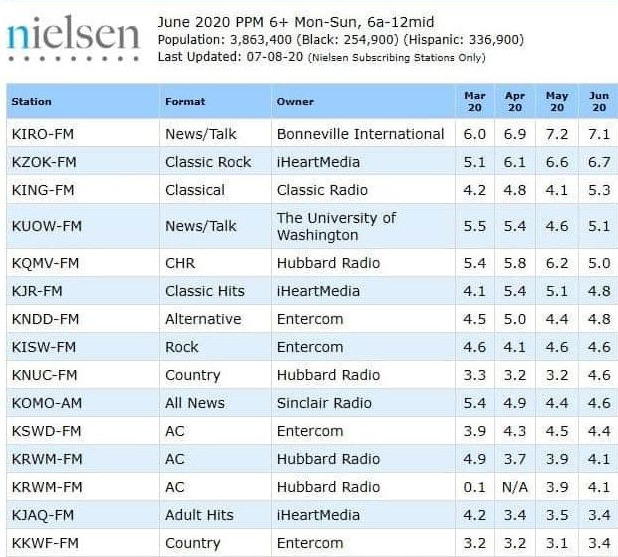 NPR Listenership Plunges, KING-FM on the Rise, and Other Evolving Media Habits

NPR reports that listenership across its various shows has fallen precipitously — down 25 percent — since the pandemic lockdown. This follows a trend all across radio. People listen most to radio while they are in their cars driving to work, and with fewer car trips, the ratings have plunged. The same is true for podcasts. Podcasts were projected to continue their explosive growth of listenership this year, but the gains have slowed by about half.

Then there’s this interesting tidbit in the NPR story:

Ironically, this larger plunge in radio listenership has occurred even as a record number of people are turning to NPR for news and other content. More than 57 million people now consume the network’s offerings each week, whether on radio or its various digital platforms. That’s a rise of nearly 10% from last year, despite the severe drop in the broadcast audiences. Podcast downloads and the usage of NPR’s listening apps are up nearly a quarter, and there is a 76% increase in users of NPR.org as more people access the network’s content from home. Additionally, for the first time, NPR is on track to make more money from underwriting on podcasts than on its
conventional radio shows, according to CEO John Lansing.

So that means radio is now not the primary business of NPR, validating its change of name from “National Public Radio” to “NPR” several years ago. Of course this is a transition other media companies have made long ago.

Years ago online readership outstripped the number of readers for newspaper’s print copies. Thus news “organizations” now instead of newspapers. According to a Pew Research study in 2019 of American news habits, more Americans get their news from social media than from newspapers.

Speaking of radio ratings. The latest Nielsens are out for the Seattle market, and yes KUOW ratings are down. But KING-FM is soaring, with a 5.3 share that puts it as the third-most-listened-to station in the market, after KIRO’s news talk format and KZOK’s classic rock.

So how has media consumption changed during lockdown? A recent global study reports:

35 percent of total respondents professing to have read more books or listened to more audiobooks at home and 18 percent having listened to more radio due to the COVID-19 pandemic, whilst more than 40 percent of consumers spent longer on messaging services and social media. Interestingly, although at least 50 percent of respondents in most countries said that they were watching more news coverage, figures for Australia and the United States were lower, amounting to just 42 and 43 percent respectively.

Douglas McLennanhttps://www.artsjournal.com
Doug is a longtime arts journalist, and the founder and editor of ArtsJournal.com, he's frequent keynoter on arts and digital issues, and works with a number of arts organizations nationally.
Previous article
Left-Wing Fascism? Which Opinions Are Allowed?
Next article
New Book: The Plundering of the Duwamish River