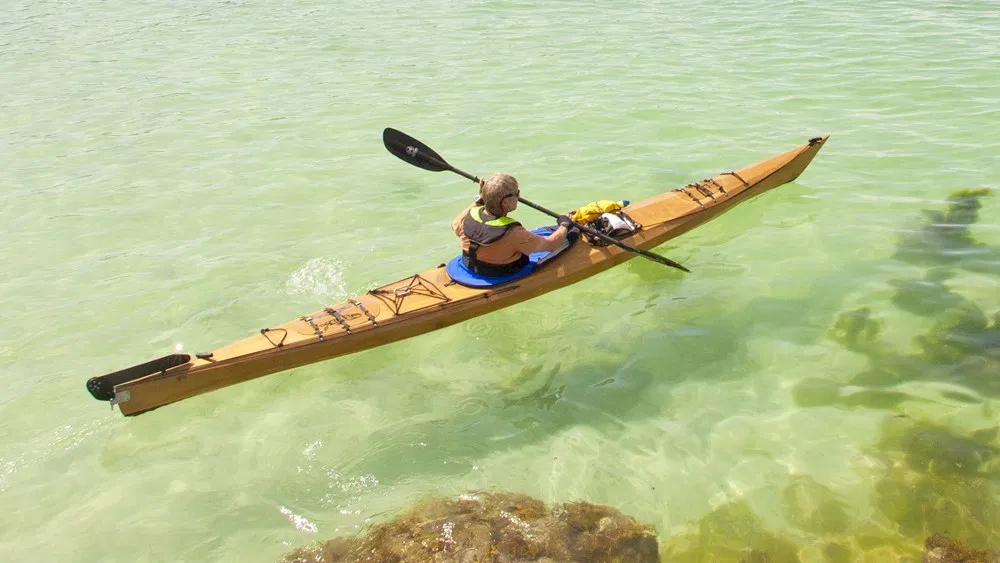 More than three decades ago, when guys like Bill Gates and Steve Jobs were building technology companies that would change the world, another Ivy League educated geek moved to Port Townsend and pioneered a very different technology – wooden kayaks.

Like Gates and Jobs, John Lockwood was on the front edge of change, but his passions lay in the North Pacific and in the sleek, super-efficient boats that had been navigating these rugged shores for thousands of years.

The result was Pygmy Boats – a tiny Port Townsend boat shop that for 33 years has been designing and shipping do-it-yourself kayak kits to the Pacific Northwest and around the world.

Pygmy didn’t make Lockwood a billionaire.  But his enterprise helped transform Port Townsend from a sleepy mill town into a Northwest destination defined in part by the quintessential image of an aging, oxidized Subaru with a honey-hued, wooden Pygmy kayak lashed to the top.

And now, at least for the moment, Pygmy is finished.  In a brief Facebook posting last month, Lockwood announced the company is going into “hibernation” this week.  At age 77, he wants to retire.  Negotiations with potential buyers ended with the Covid pandemic. So the showroom at Point Hudson is closed, and Pygmy’s skeleton crew has stopped producing kits.

In his posting, Lockwood wrote “I’m proud I have designed boats that could take me and you off the end of the road and into the peace of wild places.”

So that’s that for Pygmy.

Or not.  Lockwood leaves open the possibility of re-opening in the future.  But, even if Pygmy disappears, thousands of boats he designed and marketed, built by weekenders in Port Townsend and Seattle and around the world, will be around for years to come.

Lockwood’s passion was born 50 years ago, in 1970, when he hauled a collapsible Klepper kayak up to Whitehorse, Yukon Territory, and floated 900 miles down the Yukon River.

He was hooked, entranced by an ancient boat devised centuries ago by Northwest natives who carved canoes from cedar logs, or by northern natives who assembled kayaks with sealskins on wooden frames. Over the next few years, Lockwood worked the winters in Seattle writing corporate software, and the summers paddling his Klepper up and down the Northwest coast, camping in a hand-made teepee and living off fish, mussels and clams.

In 1986, Lockwood quit his job to focus on his first love, cutting a computer-designed, ultra-light boat kit which he called the Queen Charlotte.  That boat gave birth to Pygmy, named for the peaceful Mbuti, or “Pygmy”, people of the African rain forest that he had studied in anthropology classes.

His timing was excellent.  Seattle had become the epicenter of a kayaking craze, producing fiberglass boats that were becoming part of the regional landscape.  In time, kayaking spread across the nation and around the world.

Fiberglass boats, however, were expensive and heavy.  Lockwood’s kits, once assembled, were cheaper, lighter, and flat-out gorgeous.  Year by year, Pygmy produced more models that proved to be sleeker, lighter, faster.  Most took their names from Northwest seabirds – the Osprey, Murrelet, Arctic Tern.

The kits, which most recently sold for about $1200 plus shipping, arrived in a long cardboard box containing dozens of pre-cut plywood panels, fiberglass cloth, epoxy, hardware and several pages of intricate instructions.  Assembly consists of drilling holes at the edges of the panels, piecing them together with wire or plastic ties and stiffening the joints with fiberglass cloth and epoxy.

Sounds simple enough. Experienced woodworkers might put it all together in a couple of weeks, but amateurs spend months, working weekends and calling Pygmy now and then for advice.   And no doubt many of those kits remain boxed or partially constructed, stowed in the garage rafters.

But persistent first-time builders can, with a little help from Youtube videos, end up with a splendid boat weighing some 40 pounds and capable of sliding almost effortlessly across Northwest waters.

Fans of Pygmy Boats, a Facebook group with some 900 contributors, is loaded with advice and tributes to Lockwood and his three decades trying to improve on his designs. “I’ve built three and I’m just getting started,” writes one Seattle builder. “Family and friends are clamoring for their own beautiful kayak.”

But clamor may not be enough to resurrect Pygmy Boats.  One alternative  is Chesapeake Light Craft (www.clcboats.com) of Annapolis which has displayed its boats-from-kits alongside Pygmy’s at the annual Wooden Boat Festival. CLC reportedly expressed some interest in buying Pygmy until the pandemic intervened.

But now Lockwood is going home, leaving behind him thousands of lovely wooden kayaks to ply Northwest seas, or traverse the streets of Port Townsend atop those Subaru roof racks.

This story originally appeared in our partner site Rainshadow Journal

Ross Andersonhttps://rainshadownorthwest.com/
Ross Anderson is a founding member of the Rainshadow Journal collective. He retired to Port Townsend after 30 years of journalism at the Seattle Times.
Previous article
The Great Realignment: A Protestant Revolution Brewing?
Next article
If God Has Anointed Trump, Is It Time To Dump God?