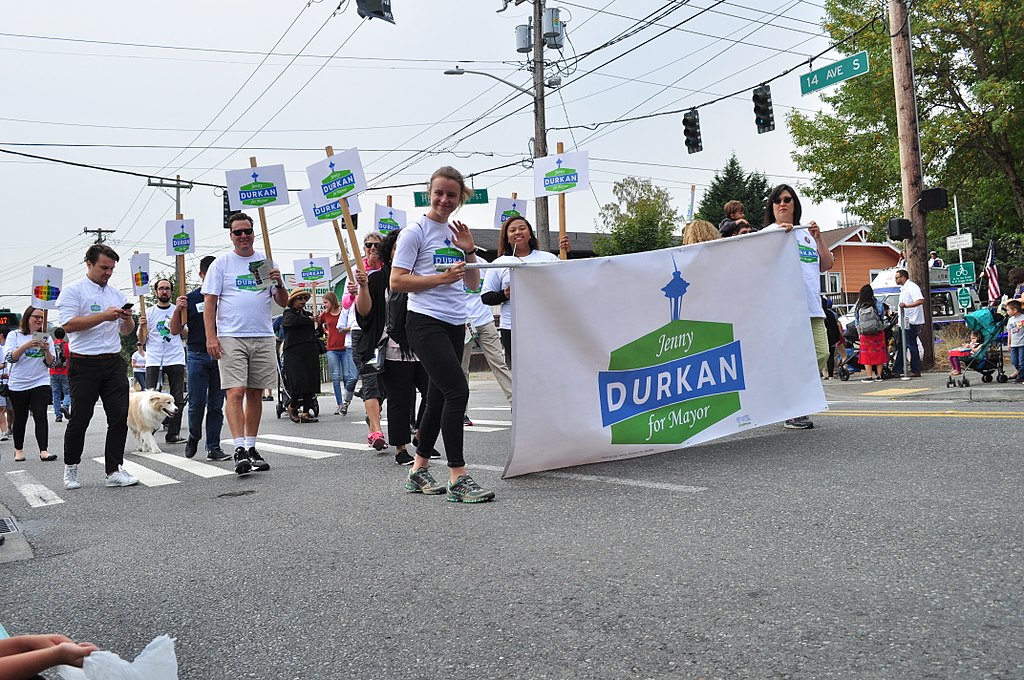 Durkan Approval Slips: Does She Still Have A Base?

Mayor Jenny Durkan, whose approval figures were reportedly in the 60s as she handled well the COVID-19 crisis, has been markedly losing ground as the city has been rocked by protest politics and CHOP. The latest KING-5 poll (700 adults, taken June 12-15) has her approval rating now in the low 40s: 36% approve and 7% strongly approve. The disapproval figures are 25% with 15% strongly disapproving.

As new KING commentator Ron Sims observed, this is “an early warning” of trouble for the Mayor.

That combined 43/40 approval/disapproval score for Mayor Durkan compares with the city council, 39-43, and Police Chief Carmen Best, 48-34. The police chief, adept at winning friends from multiple camps, retains her high popularity, while the council is improving its score, though still in negative territory.

One of the reasons for Durkan’s slide has been the no-win dilemma of what to do about protests, where she has tried to navigate a delicate slalom between honoring the right to protest and finally clearing the CHOP for public safety reasons.

In turn, that points to the main reason for Durkan’s growing unpopularity. The city’s politics has been energized by the George Floyd protests and a unified Left-Labor city council pushing for deep changes (defund police, pass a payroll tax). Does the Mayor temporize and try to please both camps? If so, does she end up being mistrusted by the two camps (Left and Center-Left)? And is it time for the Mayor to choose a camp and develop her base?

Durkan has governed as if there really is a Center in Seattle politics. Certainly there used to be: a progressive business/legal community; pragmatic organizations such as the Municipal League; and good negotiating partners in minority communities and labor. Now–not so much. Polarization has trickled down from the national level, and it was evident in the bitter city council races of 2019, when the Left routed the Center-Left.

This would suggest that the Mayor can’t bet on the Center. But is there much of a base for her to rally? The Left clearly has the Red/Blue/Green/Brown coalition (radicals, labor, enviros, people of color),and much more energy. On the other side, the business community is demoralized by its electoral setbacks. Neighborhood activists are difficult cats to herd. The Downtown Seattle Association is potent, but downtowns are in financial squeezes and are politically unpopular. Lastly, and sounding the trumpet for economic development seems irrelevant in the Amazon economy and amid all the attacks on capitalism and business.

Is the political center in Seattle politics reduced to the editorial page of the Seattle Times, here weighing in against the council’s payroll tax?

The other factor energizing the Center-Left base is the fear that if Durkan chooses not to run for re-election in 2021, that would leave the mayor’s office likely in the hands of City Council President Lorena Gonzalez, who is anathema to the business community and unpopular with her colleagues.

So far, no clarity from Durkan whether she will run (she’s not happy in the job). Nor are there signals about when the mayor might make an early start in fundraising and harvesting endorsements (there was only $4,135 in the Durkan for Mayor account as of he end of May). One wonders if the Center-Left forces will soon try to find an anti-Gonzales candidate, both as insurance policy and out of frustration with Durkan’s vacillation. (Ah, but who would want the job, given the insurrectionary council and the economic hard times?)

In politics, there is a conflict between strategy (the long game) and tactics (the short game). The council, embracing the street politics of the Left and Labor, is playing a short game, rushing through legislation, isolating the mayor.

But there is also a long game. The new payroll tax may not survive a legal challenge. The public will eventually feel very uneasy about sharply curtailed policing and worried as jobs are cut or migrate to the suburbs. Durkan or her like-minded successor might eventually reap the backlash, fueled by the pandemic and the recession. If, that is, she survives that long.