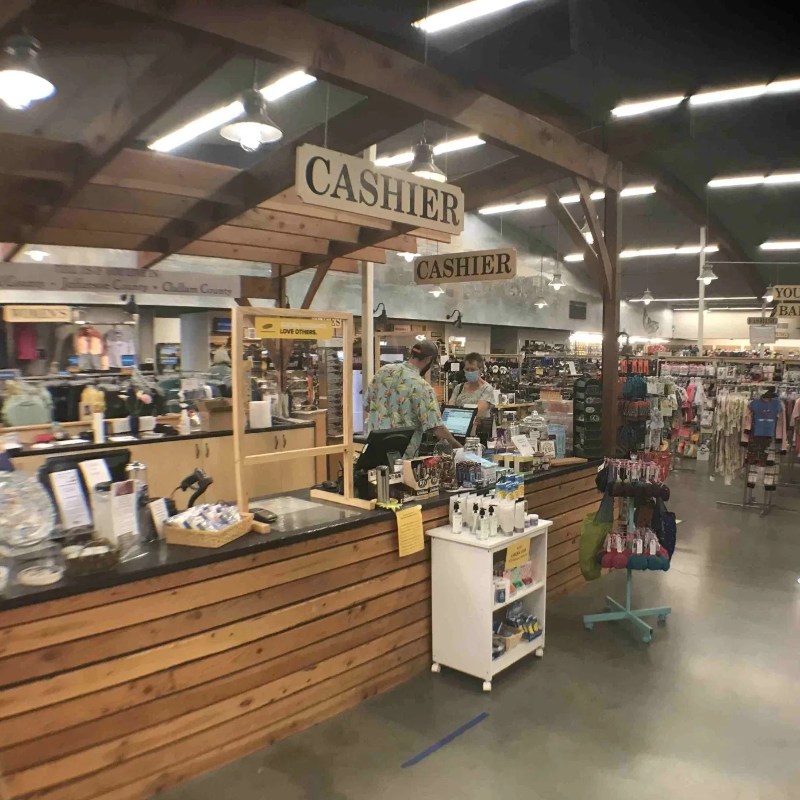 As Port Townsend began to re-open this month, folks rushed out to the barbers, the bars and restaurants. But maybe not to Quimper Mercantile. There was little pent-up demand for camping gear or bed sheets or underwear.
Lets get real. Quimper is not sexy or hip. It’s a dry goods store, a sort of mini-Walmart sandwiched between a Chinese restaurant and Don’s Pharmacy in a dated and nondescript strip mall surrounded by parking lots. Shoppers are craving a latte, a pint of IPA, a slice of pizza or gourmet olive oil — the stuff Water Street is famous for.

As they head for those shops, most shoppers are liable to stroll past something unique to Port Townsend — the largest community-owned for-profit store in the region, and probably in the nation. And that’s OK with Quimper. They sell underwear, shoes, kitchenware, towels, sheets, sewing notions, art supplies, fishing lures, Frisbees, headlamps, coffeemakers, socks, flannel shirts and about 10 different outdoor vests priced from $17 to $100. This is not what most people have longed for during the Covid shutdown. But when they do need that stuff, they know where to find it. And Quimper knows its market – the Port Townsend people who invested in the store,
and still own it.

As with their neighbors along Water Street and across the region, the lockdown has been tough. Very tough. When the word came down, they locked the doors, laid off their staff and hunkered down with the rest of us.
Now they’re back. More than half the staff is working, says Peter Quinn, the board president and co-founder. The rest are expected next month. They’re open seven days, but with slightly reduced hours – 10 to 6. Shoppers have
separate entrance and exit doors, and are asked to wash their hands and wear masks. But they’re open.

“We received a PPP loan just last week, which helps keep our cash position strong and insure our ability to continue to react to this challenge,” Quinn says.

And, all things considered, PT’s general store is doing just fine, offering a 5 percent discount to local shoppers, making money, employing local people, and holding its own against the big-box stores an hour’s drive away. Quimper is a rare community response to a common small-town predicament.

A decade ago, Port Townsend had its grocery stores, hardware stores, gift stores, bars and restaurants. On any given day, one could buy fresh organic food, fine wines, gifts or hobby supplies. But if one needed underwear, shoes, bed linens or bath towels, forget it. In a county of 31,000 people, stretching for 2200 square miles from Puget Sound to the Pacific Coast, there was no general store. The last such store, Swains, had gone out of business in 2010, a victim of the last recession. Most locals resigned themselves to buying that stuff from Amazon or Walmart.

But Port Townsend has become known for its can-do attitude, and the underwear dilemma seemed like it should be fixable. Then-Mayor Michelle Sandoval recruited Quinn, then director of the county Economic Development Commission, to help figure out what to do about it.

Initially, they looked at the idea of a co-op similar to the successful food co-op a few blocks away. But that would require borrowing a wad of money. “We wanted to start without going into debt,” says Marty Gay, one of the original board members. “So we opted for a public offering.”

Quinn had previous experience organizing a stock offering and running a public corporation, so he was elected CEO of the fledgling community corporation. Community-owned stores are more familiar in small Midwest towns, most of which sell groceries in what are sometimes called “food deserts,” rural areas that can’t support a supermarket. But mercantile stores are another matter.

To study the idea, Quinn and company reached out to Powell, Wyoming, a town of 6,500, which had addressed the same problem by appealing to the community – not for charity, but for investors. And it worked.

Selling shares to local investors at $100 each, the Quimper backers eventually raised nearly $800,000 – enough to secure a lease on the space Swains had abandoned, hire a staff and stock up some inventory. The doors opened in October 2012 – just in time for Christmas shopping. (Full disclosure: The author
owns one $100 share.)

Initially, shoppers were disappointed. The inventory was limited, and too expensive. Most weren’t willing to pay $15 or $20 for a pair of socks. “The problem is we’re not normal anything,” Quinn explains. “When we shop for
inventory, we have to carefully explain what we’re doing.”

The problem was volume, or the lack thereof. To keep their prices low, manufacturers like Haines or Fruit of the Loom have to sell a lot of underwear – more than Quimper can sell.

“Eventually we were able to work with Worldwide Distributors, based in Kent,” Quinn says.”It’s a buying cooperative, like Ace Hardware, with 300 members nationwide. They have an annual show in Reno with lots of vendors under one roof.”

Spencer made the trip to Reno, got the attention of Worldwide, and the deal was done.

Quimper also needed retail expertise, and they found it in Spencer, who had owned and operated a successful sporting goods store in California. As the store began to make money, they added to their inventory – including
Haines. Quimper has become something of a retail anchor, luring nearby shoppers who might otherwise travel to the next county. The store shelves are full and the board is considering whether and where to expand.

Competition with their Water Street neighbors is a recurring issue. In one case, Spencer ordered up a line of notebooks identical to a line sold by a nearby store; Quimper pulled the notebooks and sold them at cost to the other store.

“There’s no reason to compete with the rest of Water Street,” Quinn says. “Our mission is not to be the biggest and best, but to sell those goods that other businesses don’t sell.”

Spencer stepped aside a couple of years ago. “I realized I’d spent 48 of 50 holiday seasons in the retail business, and that was enough,” he says. But he remained as a board member and part-time chief operating officer.
Sales have increased each year, reaching $2.2 million in 2018, and exceeding $2.4 million in 2019.

The store doesn’t pay dividends, but investors didn’t expect them to. Those community shares, however, have retained their value. Each year, a few shares change hands.

But there are challenges. Sales per square foot are still below industry average, Spencer says. Some shoppers grumble that prices are still too high, but Quimper can’t compete head-on with Walmart.

Hiring and keeping staff in a high-rent town is also challenging, Spencer adds. And now the mercantile faces the same grim coronavirus economy as every other merchant in town.

All the same, Quimper is back, peddling the stuff we need.

“Our success says something important about this town,” Quinn says. “Things can happen here that just don’t happen elsewhere – like wooden boatbuilding. We identified a problem and, with the help of the community, we feel we’re addressing it.”

Ross Andersonhttps://rainshadownorthwest.com/
Ross Anderson is a founding member of the Rainshadow Journal collective. He retired to Port Townsend after 30 years of journalism at the Seattle Times.
Previous article
Vitamin W: Health Benefits Of that Nightly Glass of Wine
Next article
CHOP Devolves, And Defunding Loses Lustre