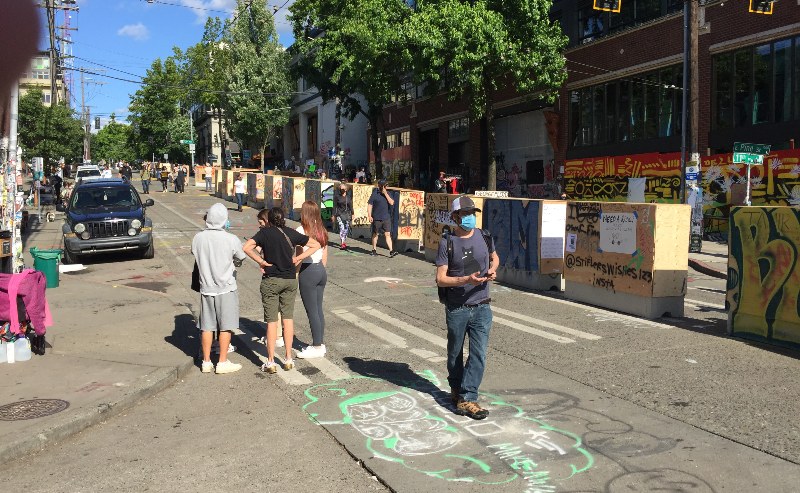 As the CHOP occupation along Pike-Pine devolves, it is, ironically, proving why we need a well-trained, transparent, publicly accountable public-safety force—not a self-appointed militia, right- or left-wing. Not that police departments as constituted, in Seattle and everywhere else, achieve these goals. But the occupiers’ efforts to protect and, well, police themselves, and to prove that we could do without official policing or (the moderate version) half as much policing, show just how hard and necessary the job is.

Disillusioned communitarians and campaigners are trickling out of CHOP, the Capitol Hill Organized Protest (formerly CHAZ, for Autonomous Zone). Residents, businesses and neighbors who’ve tried to make the best of it fear even worse is coming. One anchor of the zone’s softer, more welcoming side, the Decolonization Conversation Café, “is now moving beyond the space, both throughout Seattle and virtually,” founder Jordan Lyon writes, with a new website, “our first virtual gathering Friday and our first pop-up outside of CHOP on Saturday.”

Those in Fox News and kindred media who saw the worst from the start—a totalitarian micro-dystopia ruled by a shadowy gun-toting rapper “warlord”—are doubtless rolling in “I told you so” bliss. But their dark pronouncements have from the start exaggerated the zone’s dangers, excesses, and even extent. The New York Post´s Andy Ngo reported on Saturday that the “CHAZ occupants” (as he calls them though the name had been changed a week earlier) “control all of the Capitol Hill neighborhood,” lording it over “an estimated 30,000 residents.” This will come as a surprise to the occupants of the hundreds of blocks of Capitol Hill not bounded by CHOP/CHAZ’s four-plus blocks of streets and adjacent playfield.

Ngo paints his “five terrifying days” undercover in the zone as a perilous mission behind enemy lines, during which he disguised himself in “’the black bloc’ uniform popularized by Antifa,” and “avoided speaking to people on the chance they would recognize my voice.” He ate, slept, showered and even took water breaks outside the zone “because I was reluctant to remove my mask and risk being recognized.” Nevertheless, or perhaps because of all this skulking around, he gets spotted and flees “to avoid being injured,” though it doesn’t seem anyone threatened to hurt him.

I’m glad I didn’t know the mission was so difficult or dangerous before I accidentally infiltrated not just the zone but its security detail. On my last evening there last week, the fifth visit on which I didn’t get threatened or, as far as I know, followed, I ambled up to one of the flimsy barricades, made a little chit-chat, and hung around listening in. I didn’t says I was a journalist, nor that I wasn’t; I would have acknowledge it if asked.

I hardly looked the Occupy part with my silver hair, geeky N-95 mask, and not a scrap of antifa black. (Nearly all the night watchmen and women and a large minority of protesters and partiers at the zone went maskless—a much broader safety hazard then any guns in the zone. As the unmasked crowd that packed a Phoenix megachurch Tuesday to hear President Trump shows, there’s nothing like a supposedly good cause as an excuse to skip pesky public-health procedures.)

As I hung out at the barricade, another guy who’d newly arrived explained that he hadn’t brought his Glock because he didn’t have a holster and hadn’t yet received his concealed-carry permit. A call came over the walkie-talkie: another guard post was short of people. I and another guy were sent up to fill it. There, I just missed being sent out to patrol of the zone when someone else stepped forward.

Only one of the men and women guarding the barricades that night wore ninja/antifa black. All seemed calm, level-headed, and, with one mild exception, bluster-free. But I could have been a covert wild wack job or rightwing militia provocateur and they’d never have known. I’d have been doubly welcome if I’d brought a gun, as long as it was legal.

Might such casual recruiting lie behind any of the shootings in and around CHOP in the last few days? Were they showdowns between the self-described watchmen and the rightwing Proud Boys they’ve been watching out for? Between rival factions in the murky, turbulent occupation leadership? Or, most likely I suspect, the usual beefing between strutting young guys with more wounded pride and firepower then sense, naturally drawn to a police-free scene like CHOP.

Maybe we’ll learn the answers when the police investigations are completed. That many are eagerly awaiting those results is telling. The Times’ Danny Westneat rightly notes the irony of City Council firebrand Kshama Sawant (whom Fox News at one point risibly tagged as the “possible leader” of CHAZ) intoning, “Our movement should also demand and insist that the Seattle Police fully investigate this attack and be held accountable to bring the killer(s) to justice” while in the same statement demanding “to defund Seattle police by at least 50 percent.”

That’s no way to get well-trained, responsible and accountable cops who will thoroughly investigate crimes and get to know the communities they’re supposed to serve (which is one step toward preventing racial stereotypes and blind fear from driving their reactions). You don’t always get what you pay for, in policing as elsewhere, but you don’t get what you don’t pay for. Formerly notorious Camden, New Jersey is widely extolled as an example of successful police reform and restructuring, capped by its peaceful protest marches, with police joining the march, while neighboring cities erupted. But Camden did it by removing policing from the dysfunctional, impoverished city government, shedding an obstructive police union, merging with better-heeled suburbs in a countywide system, and, with the resources gained, deploying many more cops.

Los Angeles in the 1950s, ’60s,’70s and ’80s offers an illuminating counter-example. It propounded a “lean and mean” style of cheap, modern, and efficient policing with far fewer officers relative to population—a mobile response force buffered from corruption, and from their communities, in their radio-controlled squad cars. This model crashed and burned in 1992 with the videotaped beating of Rodney King and the nationwide rioting that followed. That launched an era of bystander recording and broadcasting of police conduct, and of public fury at police violence, whose culmination we’re now living through.

Eric Scigliano
Eric Scigliano has written on varied environmental, cultural and political subjects for many local and national publications. His books include Puget Sound: Sea Between the Mountains, Love War and Circuses (Seeing the Elephant), Michelangelo’s Mountain, Flotsametrics and the Floating World (with Curtis Ebbesmeyer), The Wild Edge, and, newly published, The Big Thaw: Ancient Carbon and a Race to Save the Planet.
Previous article
When Port Townsend Needed A General Store
Next article
How Does Seattle Make Progress Post-CHOP?