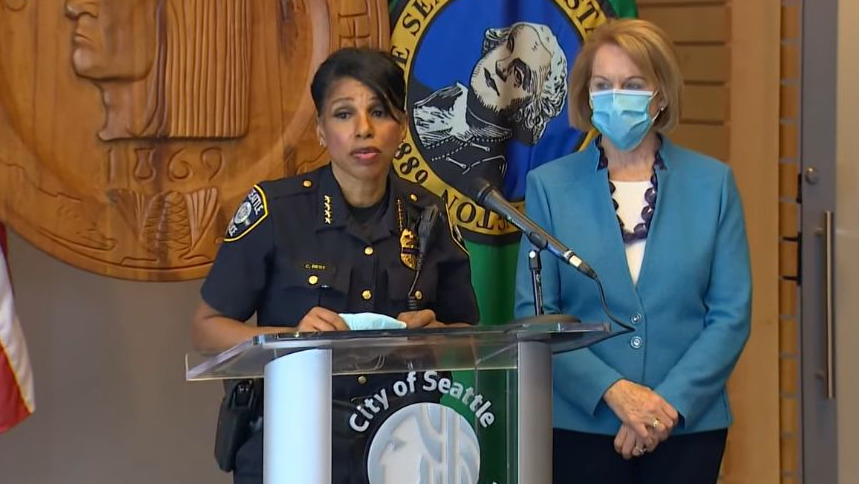 Mayor Durkan at a Low Point: Five Options for Survival

Up until two months ago, Seattle Mayor Jenny Durkan was leading a charmed political life. Prior to the pandemic, the booming Seattle economy gave the mayor lots of money for pet projects. Once the pandemic hit, Durkan’s popularity soared as she effectively marshalled quarantine measures. Polling approval numbers were in the 60s, I’m told, and she has always polled well above city councilmembers.

And then the bottom dropped out. Today, Durkan, 62, is besieged, and the storm flags are rippling in gale winds. She is losing allies, drowning in 26,000 emails, getting sued by Black Lives Matter and the ACLU, and facing threats of impeachment and growing demands she resign. Seattle politics has been emotionally galvanized by the street protests over the killing of George Floyd as well as Durkan’s shaky generalship over Seattle Police. The issues have moved well ahead of the Mayor’s pragmatic centrism. Can she “get it,” or will she have to get out?

Earlier this week, the Mayor began belatedly to move with the times. She gave the order to abandon the East Precinct police station on Capitol Hill, despite the public opposition of her police chief, Carmen Best. Durkan pledged no more tear gas against protesters, though awkwardly it was used days after that order because of a loophole. The Mayor reacted with a let’s-negotiate stance when the Black Lives Matter lawsuit was filed, meant to ban militarized responses to protests. She wants cops to turn on their body cameras in protest actions, overturning regulations designed to protect privacy.

Some of these shifts indicate the Mayor’s effort to repair her never-good reputation with surging progressive politics in Seattle. It may be too little and too late. The city council is newly stocked with a majority who owe their elections to the Movement Left and labor unions. It’s rare for a mayor not to have at least one loyalist on the council, but that’s Durkan’s dangerous plight. Local elected officials, including state legislators, are distancing themselves, as are some of the groups who elected her in 2017. She’s getting dangerously isolated.

It’s reached the point, I’m told, where not only are Durkan’s chances to get elected to a second term in 2021 in jeopardy; but also her hopes of getting an attractive offer from a President Biden are fading.

Let me list five options for the Mayor to regain her political standing, each of which points to her vulnerabilities.

It is an urgent moment in the nation’s and Seattle’s politics. Can we afford another failed mayoralty? Some will surf the high tide, and some will go under. Which will it be, Mayor Durkan?

David Brewster
David Brewster, a founding member of Post Alley, has a long career in publishing, having founded Seattle Weekly, Sasquatch Books, and Crosscut.com. His civic ventures have been Town Hall Seattle and FolioSeattle.
Previous article
Elsewhere: Letter from the LA Protests
Next article
2010 Entertainment; 2020 Allegory