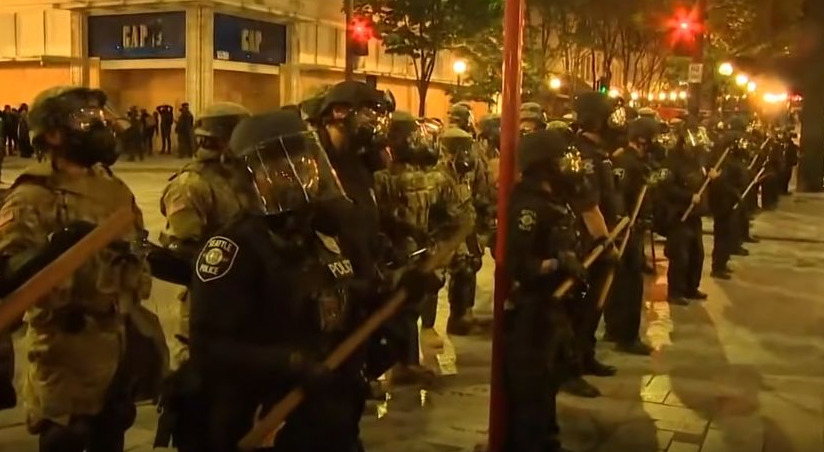 Let’s Face It: Seattle Police’s Consent Decree with the Feds Has Not Worked

As our country tries in this moment to face its chronic issues with structural racism and over-policing (what Stephen Colbert called “our nation’s pre-existing condition”), Seattle has a unique perspective on the problem. The city was busted in 2012 for biased policing practices after an investigation led by U.S. Attorney (now Seattle Mayor) Jenny Durkan. It admitted the problem, signed a consent decree, and began many years’ hard work of reforming its practices under court supervision.

If everything had gone according to plan, the city would have completed the two-year sustainment period by now (having been found to be in initial compliance in 2018) and would be on the verge of being released from the consent decree altogether. But things didn’t go that way. Most notably, contract negotiations with the police officers’ union fouled up the plans for installing a comprehensive, civilian-led police accountability and discipline system. And the past two weeks’ protests have shown that SPD still has an instinct toward overreacting with violence when provoked.

It’s tempting to squint at these issues and convince ourselves that we can still patch them up, get back in Judge James Robart’s good graces, and wrap up the consent decree in the next couple of years.

The truth is much harder to face: these and other latent problems show that while a lot of good came out of the reforms driven by the consent decree, the underlying problems have not been exorcised, and many have simply been papered over with bureaucracy. The consent decree didn’t do what we had hoped it would do. The structural racism, biased policing practices, and overpolicing continue; we’ve just made them harder to see — right until the moment when they are in full view.

That isn’t to say there hasn’t been progress on important issues. The most obvious progress, and most worthy of celebration, is the dramatic reduction in use of force by individual police officers over the past eight years, both in the number of uses, and the severity of use. The regular reports generated throughout the consent decree years bear this out, and Judge Robart has called it out as well.

But before we start congratulating ourselves, the numbers also impart a sad truth: the remaining use of force continues to be disproportionately against people of color, and especially Black people. The same is true for Terry stops, as well as for frisks and incidents where officers point their weapons at a suspect. The problem with overpolicing is smaller now, but it’s still racist.

SPD knows this, and has struggled with the reasons why. They have enlisted consultants to help analyze this issue (to their credit), and after two reports last year their main conclusion is: the police seem to be more lenient on white people.

That finding alone is a strong argument that the consent decree process hasn’t truly reformed the department. But it’s hardly the only issue. Let’s not forget that SPOG, the police officers’ union, has leveraged its political strength and its status under state law to block important aspects of the police accountability and discipline system designed by the City Council and the community. It’s perfectly legal (unless Judge Robart declares it unconstitutional), but this protection undermines the ability to hold police officers accountable for their actions.

Not that the accountability system is perfect as designed. The Community Police Commission (CPC) is a marginalized “voice of the community” that wholly relies upon the indulgence of the Mayor, City Council and SPD in order to influence policy — in fact the instances where Judge Robart has taken their side are notable for being so rare. The CPC can speak, but no one in power is required to listen.

And there’s the militarization of the police force, on full display this past week as cops repeatedly tear-gassed a residential neighborhood. That speaks to the larger issues that SPD has with crowd control, and more generally with police activity involving large numbers of officers. Much of the consent decree focus has been on training individual officers to use force sparingly and in proportion to the provocation, and to de-escalate situations. But there is plenty of evidence that when it comes to large events SPD is far too quick to escalate — with disastrous consequences. To their credit they have been using “less lethal” methods during the recent protests. To the best of my knowledge not a single bullet has been fired other than the rubber kind — but even those militarized “less lethal” methods inflict a substantial amount of misery and often are not targeted at the people provoking the police.

Also, in a recent eyebrow-raising turn, the Seattle City Attorney’s office filed a lawsuit to block King County’s attempts to reform the inquest process, which has come under fire in recent years as it was applied to the deaths of Che Taylor and other persons of color who were killed by police.

In the last week there have been calls for Mayor Durkan and Chief Best to address many of these issues: from local elected officials, the City Council, the CPC, protesters, and even within city government. And while their demands are valid, they miss the point; they are playing whack-a-mole with a fundamentally broken policing system. Fix these problems, and others will pop up elsewhere.

The hard truth is that the consent decree, despite the best of intentions and a remarkable level of cooperation from the city, didn’t address the fundamental cultural issues in the department that lead to over-policing and bias. It’s as if we’re driving from Spokane to Seattle in a car that can’t make it over Snoqualmie Pass; we can be glad that we made it as far as Ellensburg, but we’re not going to make it to our destination.

The City Council is starting to understand. We can see progress in its calls for reducing the budget for SPD significantly and for redirecting the funds into other programs to address the underlying drivers of poverty, racism, inequality, and disparate outcomes for people of color that tend to lead them into criminal activity. But it’s much easier to identify the problem than to draft the best solution. At least there’s a recognition that there need to be structural changes. It won’t be easy for councilmembers to fully embrace this approach, as they too have invested a significant amount of time, energy and political capital in the current system, broken as it is, and in the Consent Decree.

And it will be far harder for Mayor Durkan. Her legacy, not to mention much of her political credibility, is tied to her work on negotiating the consent decree. For her to abandon it, this close to the perceived finish line, would probably sink her future political ambitions. It’s clear that Durkan still believes that staying the course is the right plan. Asked a few days ago in a press conference whether she would entertain tearing down and rebuilding the Seattle Police Department as Minneapolis has now committed to do, or alternatively whether she believes the current SPD structure can function, Durkan said:

“I believe it can. That’s basically what we did through the federal consent decree. We tore it down and rebuilt it around all uses of force. But we road tested a lot of those policies in the last week and two weeks. We now know where we need to make changes in the area of crowd control. So that’s why we’re looking to the federal monitor, OPA and OIG to help us on that. In Minneapolis they’ve not been through any process like that before. The three instances I know where that’s occurred, it’s occurred in lieu of a consent decree process.”

That’s classic Durkan — emphasizing a “culture of continuous improvement,” focused on incremental changes. The consent decree is working, it just needs some tweaks. No doubt they can make some changes in policy, eliminate some of the most egregious militarized equipment from SPD’s arsenal, and they will see an improvement in crowd control.

But it’s still whack-a-mole, and in the voluminous data SPD is collecting under the Consent Decree there is scant evidence that the underlying culture is shifting.

The consent decree was bold and ambitious in 2012. It was a good plan for the time that leveraged best practices to the extent they existed, and Durkan is to be credited for making it happen. But with 20/20 hindsight, it’s time to admit that it isn’t going to get us to our chosen destination. We need a new big idea, one that is neither obvious nor forthcoming at the moment.

It’s easy to say that you want to gut SPD’s budget and redirect the funds to community-based programs that will reduce the pipeline into the criminal justice system. It’s harder to write a real plan for how to transition SPD into the public safety agency we want it to be, in such a way that doesn’t simply inherit (or reinvent) the existing cultural biases, tendencies toward escalation of force, and resistance to accountability. And we also need to recognize that there are in fact bad actors out there in the world, and some of them are armed to the teeth; police officers are sent into harm’s way on our behalf, and we need to respect the important role they play in our society. Public safety has many facets, and it’s difficult to design for them all.

Fortunately, we’re a smart, well-educated city, and if we can put aside our partisan bickering — and our attachments to past investments — we can once again do something bold and ambitious that will start us moving again towards our goal of a just, safe, equitable city.

This article first appeared in www.sccinsight.com, which the author created as a close monitor on Seattle City Hall.

Kevin Schofieldhttp://sccinsight.com
Kevin is a city hall reporter and the founder of SCC Insight, a web site focused on providing independent news and analysis of the Seattle City Council and Seattle City Hall in general. In a previous life, he worked for 26 years in the tech industry in a variety of positions but most notably as the COO of the research division at Microsoft. Kevin volunteers at the Woodland Park Zoo, where he is also on the Board of Directors. He is also the Vice Chair of the Board of Trustees of Harvey Mudd College.
Previous article
An Open Letter to Mayor Durkan: Feeling for You in a Whirlwind
Next article
Demographic Trends: African American Migration to Seattle Suburbs