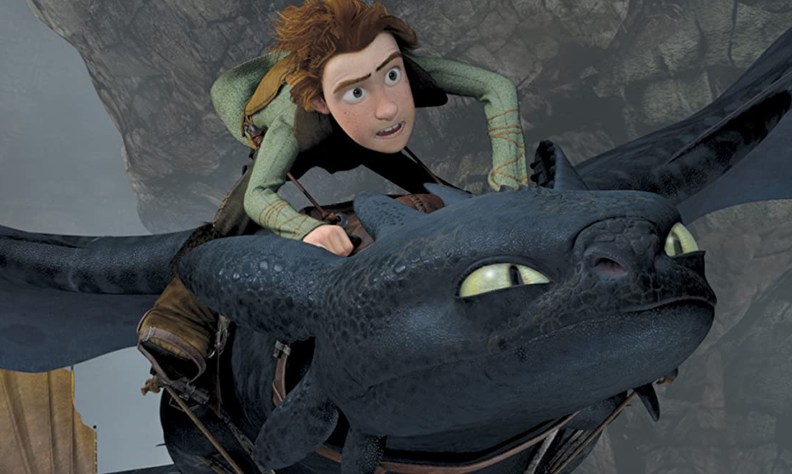 When How to Train Your Dragon hit the screen back in March 2010, it scooped the kind rave reviews movies for kids rarely enjoy, plus half a billion dollars in the kind of countable applause big production companies live for. Two sequels followed, in 2014 and 2017, with the usual loss of critical and box-office steam sequels are prone to.

Last week the original film abruptly appeared on Amazon Prime Video, part of the escalation in the streaming wars brought on by the colossal June 1 content-dump accompanying HBO’s transformation into HBOMax. I idly checked it out, curious if time had been kind to this galumphing, jokey, and above all noisy coming-of-age tale about a frail Viking teen-ager trying to find a place in a world of hatchet-wielding, bloodthirsty berserkers trying to stave off a plague of avian saurids carrying off their livestock.

How to Train Your Dragon doesn’t exactly live up to my memory of it. It far surpasses recollection, shrugging itself out of the familiar skin of animated fantasy action-movie and emerging as a noble allegory: of justice denied and recaptured, hatred transformed by ,love, a rigid social order turned upside down by individual intelligence, determination and courage.

I don’t want to say anything more to justify my position here. Too much talk would mean too many spoilers for people who’ve never seen the film But I do want to suggest that you consider sitting down with this movie with your family one day soon, before the forces that have been keeping you all in irritating sync wane too much. For the moment, it’s about the world we’re living in.

So let me make a bet with you: If I lose, you’ll have one more reason to despise my taste: I think that HTTYD is as good as any Pixar production, and in its boisterous way is the equal of any of Hayao Miazaki’s action films. But give me a chance: don’t join Amazon Prime on my say-so, but if you’ve already got the service, take a squint: as our President so justly asks: What have you got to lose?

Roger Downey
Born in Canada moved to Peru's altiplano at the age of six; came to the U.S. at 10 to discover that you don't use your feet to dribble the ball. Learned from the git-go that "America" is an idea, not a place.
Previous article
Mayor Durkan at a Low Point: Five Options for Survival
Next article
How To Make: Bad Apple Pie