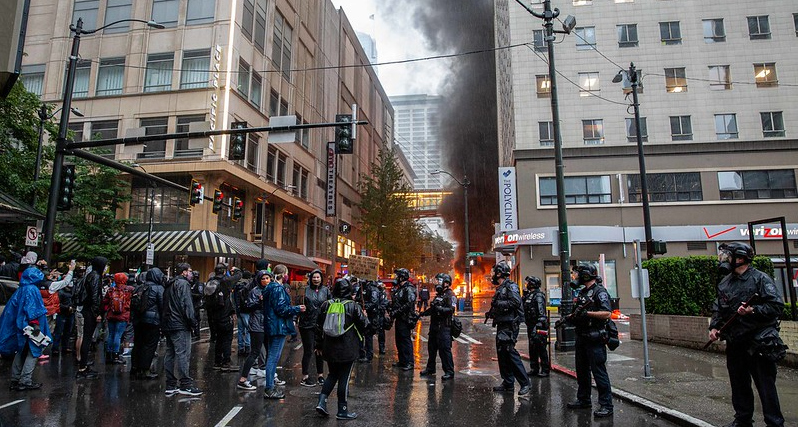 Granted, it’s too early to draw conclusions from the tempestuous, unsettling week of protest marches, but let me attempt some early observations about the effects on our region. At the very least, these are pivotal times.

A new lens. While earlier protests have been about class (Bernie’s 2016 race, Occupy, 99%, minimum wage), the new lens for our politics is now race and structural racism. This is a volatile card to play, at least nationally, and risks backlash as well as a rush to extreme positions. Look for the reparations issue to come to the fore.

A new bad guy. The activists have seized the narrative on the protests, making cops the issue, the provocateurs of the violence and looting. “Defund the police” is the ambiguous rallying cry, one bound to put financial pressure on police unions, who are experts in fighting back. Movements need obliging enemies, as Amazon’s foolish dumping of $1 million into the city council races proved last year. Others warn that previous calls for police reform often produce studies that just sit on the shelves.

Black issues matter. The Black vote is now the dominant voice for the Democratic Party, yet polling shows that 43% of Black voters consider themselves “moderate” and one-quarter say they are traditionalist or conservative. How this moderation meshes with the more radical white positions will be a key factor, a challenge for a President Biden.

Leftward, ho! If Act I of the rise of Movement Left in Seattle was the 2019 city council elections, which they swept, these protest marches are Act II. Days of protest marches and media attention have an enduring effect on participants by creating solidarity, forming alliances, and raising the emotional stakes. Local Democrats are intent on activating the impatient base, and bases of both parties loathe weakness.

A generational change. These marches draw young people, and they elevate young people and minorities to leadership. A good example is Nikkita Oliver, the south end activist who ran for mayor in 2017 and is negotiating the political demands of the marches. Our city council is now young, new to the job, and just getting its footing and finding its leadership.

Justice, not jobs. In a deep recession, which we may face, politics often shifts to job creation and alliance with business. But the Seattle business community is now cowed by the activists and demoralized after the fizzle of its efforts to shift the city council. This might change, but for now the causes of social justice are overwhelming both the pandemic and the recession.

Opportunities for Trump? As Nixon did in 1968, an era of protest can produce a backlash calling for law and order. A second concern for Democrats is the way radicalization can prompt young voters to give up on the system and refuse to vote. So far, Trump’s efforts to capitalize have been inept and have mostly backfired. But these issues enable Trump to change the subject from his mishandling of the pandemic and the sour economy.

Hot seats. Mayor Jenny Durkan, long despised by the Movement Left in Seattle, is now on the defensive and faces a whole series of can’t-win decisions. Councilmember Kshama Sawant is already calling for the mayor’s resignation and her impeachment by the council. This increases the likelihood that Durkan will not seek a second term in 2019, and her national prominence makes her more likely to receive an attractive job offer from President Biden. Black police chiefs such as Seattle’s Carmen Best are also under pressure. People in authority, such as the toppled editors at the New York Times and the Philadelphia Inquirer, will grow cautious.

Dynamiting log jams. There are many tributaries flowing into these massive marches: pandemic, economy, climate change, Bernie, college debt, minimum wage, the Sawant effect. It may fade. The activists might over-reach or fall into feuds. But this feels different, more galvanizing, broader, unified, already claiming some victories. So I would predict many of the blockages in our politics might be overcome: affordable housing, homelessness, incarceration, new taxes, transportation funding. It’s not pretty, and the lurches forward are unpredictable, but stock up on dramamine and expect sea-changes.

David Brewster
David Brewster, a founding member of Post Alley, has a long career in publishing, having founded Seattle Weekly, Sasquatch Books, and Crosscut.com. His civic ventures have been Town Hall Seattle and FolioSeattle.
Previous article
FENCE: The Power of Pictures next to a Changing Waterfront
Next article
Behind The Curtain Walls: Seattle’s Tower Architecture