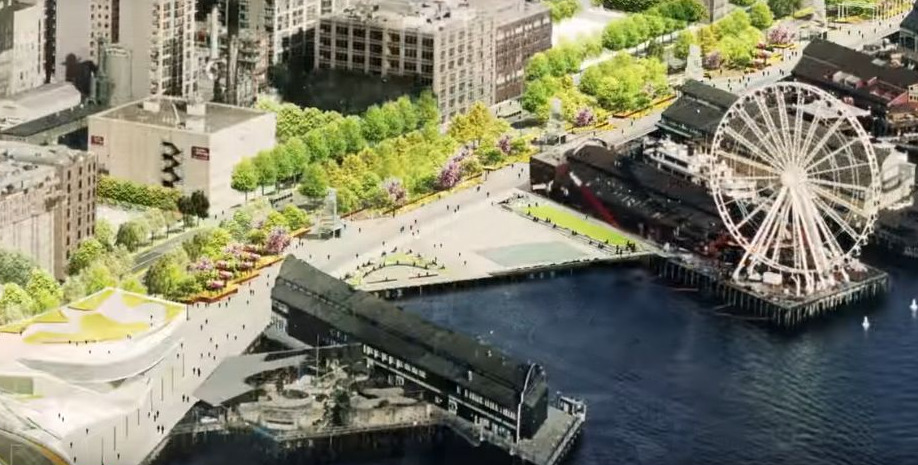 FENCE: The Power of Pictures next to a Changing Waterfront

It’s a little hard to find, but don’t miss FENCE, a traveling photography exhibit on Seattle’s central waterfront. It’s on a series of banners tied to the blocks-long temporary chain link fence on the inland (East) side of Alaskan Way, facing the weedy edges of the old pavement, and between the Seattle Aquarium south to the Ferry Terminal. You’ll need to get up close, and plan on spending an hour, once you get there.

Sponsored by Friends of Waterfront Seattle with the City of Seattle, the exhibit was mounted this spring in partnership with Photographic Center Northwest and the Brooklyn-based home of FENCE, called Photoville. The Seattle show is part of a changing, multi-year exhibit to be mounted while Seattle’s waterfront park is built, according to Heidi Hughes, director of Friends of Waterfront Seattle (FWS). Local photographers are also participating. FWS had planned an opening reception and tour in April, said Hughes, but that was undone by the pandemic.

FENCE was planned to adapt to sites in 11 different cities. For the Seattle version, photographs are screened on technical fabric panels and hung with grommets. Panels include statements from the artists and background about the program.

It’s a reminder of the power of still photos to explore and explain, especially events that blend history with natural phenomena. Much of the exhibit consists of photo essays reminiscent of extinct magazines like Life. Some of the short series are not-so-simple documentaries. Others are the product of more studio-based work and staging.

The artwork is eclectic. Some are reminders of trauma and disaster, such as angry faces on the street in warring Northern Ireland brought back to life by Ed Kashi, (No Surrender, The Protestants), and the loss of the ice towers (Artificial Glaciers) that have sustained humans for a long time in the mountains of India, by Ciril Jazbec. Others make us laugh, like canine mug shots shown next to an array of objects that define the animals’ inner lives, A Dog’s Life by Alicia Ruis.

A number of the sets are devoted to decadent or fetishized food—from classic still life painting to contemporary postings of plates. Artists include Rachel Bee Porter (The Joy of Cooking), Victoria Bouloubasis (Cravings), Adrien Broom (Farm-to-Camera) and Dominic Episcopo (In Situ). But there is very serious eating in others. In People of the Caribou, Keri Oberlv documents Native Americans as they engage in the ritual of butchering and preserving Caribou, and feasting together.

Some of the artists explore the limits of photography as an artistic medium. Magali Chesnel presents a series of abstractions in the form of aerial photography in Painting-Like. Jose Snook’s Mimesis uses the tools of composite photography to create false symmetry and to fool the eye into thinking that assemblages of skeletal dried leaves are in fact bodies of as-yet unknown insect species.

And then there are the real crowd-pleasers—furry animals. There’s something for everybody, from conservationists to ordinary pet owners.  Michael George’s Life at the Zoo shows everything you wanted to know about cleaning walrus teeth.  There are Meditations by Alice Zilberberg, which show endangered species in an exalted landscape, and Alain Schroeder’s documentary critique, Saving Orangutans. Joyce Reinertson puts fluffy cats on display with golden antique frames and cute animal toys in In and Out of the Frame.

Three blocks on the south end of the exhibit are given over to work by local photographers selected through the Photographic Center Northwest.  Each image is a one-off and many look to be stills for a Northwest noir-ish movie set in a small town or on Capitol Hill. In fact, they were all shot within 48 hours for a fundraising event last summer called Chase the Light.

While you are at the show, you can check out the ongoing construction project along Alaskan Way. The Alaskan Way Viaduct has been completely dismantled and cleared away. Near the photography exhibit, the newly rebuilt Pier 62, still closed to the public, can be seen. Preliminary grading has been done for the elevated Overlook Walk, which will connect Pike Place Market with the promenade along the newly rebuilt seawall. The new waterfront park is expected to be ready for use in 2024.

Clair Enlow
Clair Enlow is a freelance journalist writing about architecture, planning and history. She’s a Loeb Fellow and an honorary member of AIASeattle.
Previous article
In a Small Eastern Oregon Town: A Demonstration of ‘Just Locals Fed Up’
Next article
Protest Marches Foretell a Political Sea-Change for Seattle