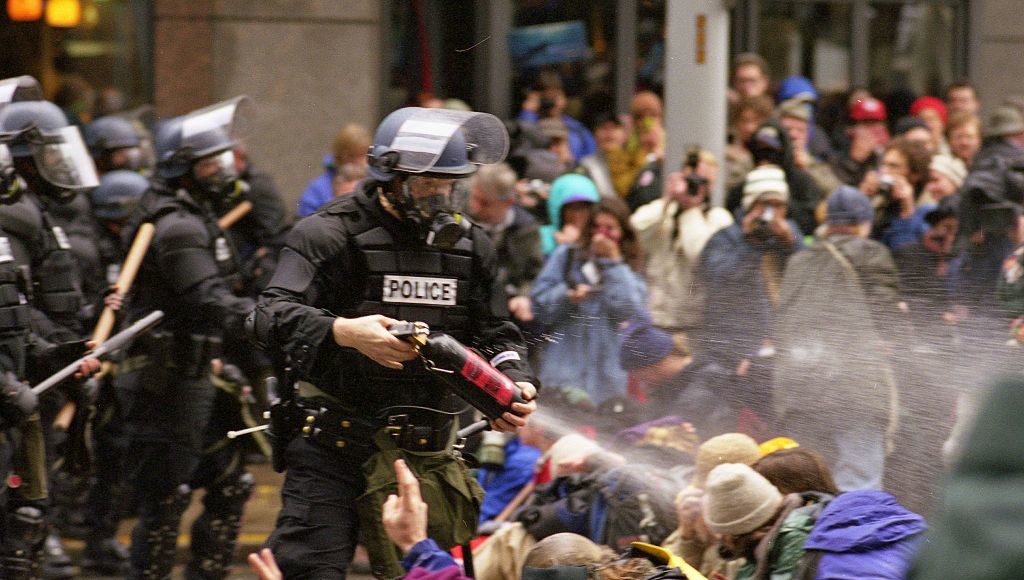 Battles of Seattle, WTO 1999 and Today

Twenty years ago on the night of Nov. 30, 1999, Keiko Morris burst into the Seattle Times newsroom half blinded by stinging tears. The young reporter had been on downtown streets covering anti-World Trade Organization (WTO) riots. She told those of us working at our desks that she’d been hit with a faceful of tear gas.

I followed Keiko into the restroom to help bathe her eyes. Washing with tap water seemed to help. But then she lamented: “My hair. It’s full of tear gas: feel it.” Keiko’s short Afro had absorbed the chemical spray, soaking it up like a sponge. I took a tentative feel and then recoiled, my hand and dripping with the toxic liquid. I had inadvertently sprayed second-hand tear gas all over the restroom and out across the second floor.

We would smell and fight that sharp noxious odor on the streets of Seattle and in our poorly insulated offices throughout the week as World Trade Organization (WTO) battles raged around us. It was a war the world followed on live television, tarring a city that had naively longed to appear “world class.”

Seattle’s downtown once again reeks of tear gas and the chaotic events of this past weekend are being compared to those of 20 years ago. But in many ways the events are different.

The WTO riots in November, 1999 drew vastly more people — estimates ranged from 50,000 to 100,000 — to downtown streets. Protesters represented broadly different interests: some labor, some environmental, some anti-global. Some mockingly called it “World Take-Over.” Opposition led to raucous battles between hordes of protesters and an overwhelmed and seemingly over-militarized Seattle police force.

This past weekend’s chaos had a completely different focus — not on economics and trade but on a horrifying racial incident, the death of George Floyd whose life was cruelly snuffed out as a white policeman pressed a knee into his neck and three other officers watched. Video tapes, depicting the atrocity, aired repeatedly.

Seattle groups responded and scheduled Saturday marches and demonstrations. Participants (many masked to curtail spreading the virus) came to express understandable anger over Floyd’s death and that of other African-Americans, slain in multiple miscarriages of justice. Protests were deeply personal. Thousands held up their hands and repeated George Floyd’s final words, “I can’t breathe.”

Unfortunately, the peaceful demonstrations were hijacked by squads who came to target police and wreak damage. Those bent on violence threw rocks and frozen water bottles at police, inflicting injuries. They tossed Molotov cocktails, igniting police vehicles. They smashed windows, sprayed graffiti and looted stores. After Seattle Mayor Jenny Durkan declared a curfew, many demonstrators left, leaving the rock-throwers to roam past midnight. Some 60 were arrested.

There are some parallels with the 1999 WTO riots. Both events left the city damaged and reeling; both were set in motion by a deeply felt need to send a message. Unfortunately both attracted individuals motivated more by desire to inflict pain, loot, and destroy.

However, handling of the two events differed markedly. The WTO riots suffered from Seattle’s failure during months of lead time to prepare adequately, to involve city council and others in planning, and to foresee signs of a disaster. By contrast, the 2020 unrest came swiftly, stemming from the killing of an African-American, a final straw in a litany of injustices.

With only hours to prepare this time, Seattle was better equipped because of hard lessons learned 20 years ago and those learned during the interim. Despite lapses like one badly-handled arrest on Saturday, Seattle police today are better trained, more schooled in crowd control and better monitored. Seattle has civilian oversight: an Inspector General, Office of Police Accountability auditor, a review board, and a Community Police Commission.

What else differs from 20 years ago was smoother coordination between branches of city government. During WTO, Seattle police and fire departments were at odds, with Seattle police unable to get assistance from fire units. Today’s first responders were united. Other city departments, Seattle City Light and Public Utilities, worked together. There was stout leadership from Mayor Durkan and Chiefs Carmen Best and Harold Scoggins.

In the aftermath, there has been a welcome outpouring, as never before, from Seattle citizens. On Sunday, they came, uninvited, to sweep broken glass, scrub away ugly graffiti and help restore order to the streets.

Things have changed in 20 years, although questions inevitably remain. Already we’ve heard complaints from those on all sides who would fault the city and its leadership and police. There undoubtedly is room to investigate and to improve.

But this time (unlike 20 years ago) an important message did get out. The justified fury over George Floyd’s death has made clear that we face issues beyond the pandemic crisis. What remains to be addressed is the institutional racism crisis. We must hope that those bent on delivering their important message and the good citizens who gave of their time to repair Seattle will unite. They can and must help us find our way forward.

Jean Godden
Jean Godden wrote columns first for the Seattle Post-Intelligencer and late for the Seattle Times. In 2002, she quit to run for City Council where she served for 12 years. Since then she published a book of city stories titled “Citizen Jean.” She is now co-host of The Bridge aired on community station KMGP at 101.1 FM. You can email tips and comments to Jean at jgodden@blarg.net.
Previous article
Who Buys the Underwear: #Pandemic Highlights Housework Gender Gap
Next article
Kits to Convert Restaurants to Post-COVID Dining