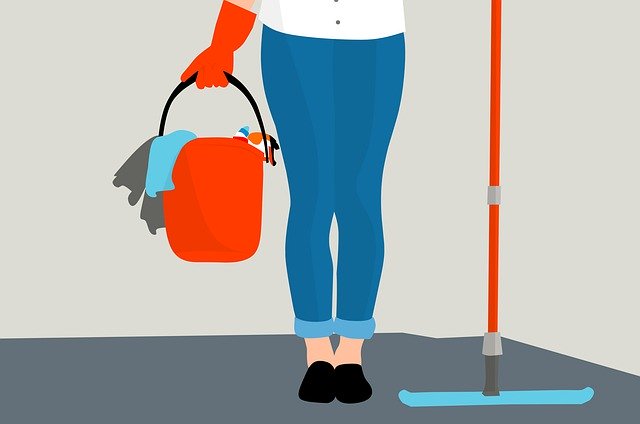 Stuck at home over the past months, we start to notice more. Dust balls, grease marks, spots of mold in the shower. The children need new underpants. There’s no scotch tape. All issues so easily overlooked when we were busy dashing out and about, but now they appear magnified and demanding of action.

And if you are a woman living with a man, guess who is more likely to take action?

We’ve enjoyed decades of significant progress toward gender equality with advances at all levels in the workplace (although there is still a pay gap and a boardroom gap) and exciting breakthroughs like Nancy Pelosi shattering what she calls the “marble ceiling” to be the first Speaker of the U.S. House of Representatives. A record number of women sought the Democratic nomination, and Joe Biden has promised to choose a woman running mate.

Still, in your house, who buys underwear for the kids and deals with that bathroom mold? This housework gender gap has been widely documented and is drawing renewed attention during the COVID-19 pandemic as couples are cooped up together and confronted with the disparity. In Japan, one frustrated woman now confined to home finally made a list of all the chores she did compared to her husband: Her list, 210. His list, 21.

I haven’t seen her list, but I’m not surprised that she does so much more. I would guess that her list also supports my theory that in the end chore parity comes down to who buys socks and underpants when the children need them. I noticed this when I had two young boys at home. Despite all the ways my husband helped, I can’t recall him ever buying underwear for the boys. I wondered if this might have changed for Gen X and Millennial moms. So, I did a very informal survey among some young mothers I know on Bainbridge Island. All said that yes, they buy the underwear.

“Of course, I buy the socks and underwear,” one young mom emailed me. She added that after her husband began spending so much more time at home, he expressed frustration at the amount of scotch tape their kids burn through in a given week. “I had to explain to him that their at home scotch tape usage was normal until I finally had to ask, ‘Do you think this is the same roll of tape we have had since we moved in together? Don’t you ever wonder where the tape comes from?’ and we have had that discussion about many, many other consumable products since this whole pandemic started.”

While her husband and most young fathers today are doing more at home than their fathers or grandfathers did, they appear to have inherited certain gender norms that place a greater burden on mothers – whether it’s buying underwear or knowing how much scotch tape is needed or keeping track of when the children have school projects due or remembering to set up a zoom for grandma’s birthday.

The headline of a New York Times story aptly summed up this household dilemma: “Young Men Embrace Gender Equality, but They Still Don’t Vacuum.” The article went on to describe how traditional views about housework still persist and cited a Gallup survey that found that among opposite-sex couples, “those ages 18 to 34 were no more likely than older couples to divide most household chores equitably.”

As the Center for American Progress noted in a 2018 report: “There have been changes to the gendered division of family care, but women remain disproportionately more likely than men to care for children and other family members. As a result, working mothers are especially likely to put in many hours at work and then return home to even more unpaid labor.”

As defined by the Organization of Economic Cooperation and Development, unpaid labor is time spent doing routine housework, shopping for necessary household goods, child care, tending to the elderly and other household or non-household members, and other unpaid activities related to household maintenance.

Melinda Gates has often spoken out about the impact of women’s unpaid labor around the world, and research through the Bill and Melinda Gates Foundation has probed the imbalance in the amount of invisible labor of women compared to men. “In every country on every continent, women do more cooking, cleaning and caretaking. On average, women around the world spend 4.5 hours a day doing household chores, while men spend less than half as much time,” Gates once told CNBC.

Even in families where the women are the primary breadwinners, research shows they continue to do more of the unpaid home and caring labor.

But why? I’m not sure I have ever met someone who enjoys scrubbing the toilet and vacuuming up dust mites. Simone de Beauvoir in The Second Sex, published in 1949, wrote: “Few tasks are more like torture of Sisyphus than housework, with its endless repetition.”

One of the reasons the gender disparity in unpaid labor endures is that so much of it is invisible. Men mostly remain oblivious to how much work their spouses do taking care of the home and family needs.

But in the past few months, fathers have been around and it’s hard not to notice. Like that Japanese couple, they find themselves confronted by the disparity in housework and surprised to realize that they haven’t been the equal partner they pictured themselves to be.

Maybe this forced awareness of housework inequality will engender greater appreciation for the unpaid labor of women and maybe men will celebrate this Father’s Day by manning up to a larger share of the unpaid work load. As a starting point, how about each couple at home with children follow the example of Aki Kataoka in Japan? Make a list. And let Post Alley know how it adds up.

Linda Kramer Jenning
Linda Kramer Jenning is an independent journalist who moved to Bainbridge Island after several decades reporting from Washington, D.C. She taught journalism at Georgetown University and is former Washington editor of Glamour.
Previous article
Betrayal of the Elites: When A “Non-Profit” Hospital Administrator Makes $10 Million a Year
Next article
Battles of Seattle, WTO 1999 and Today