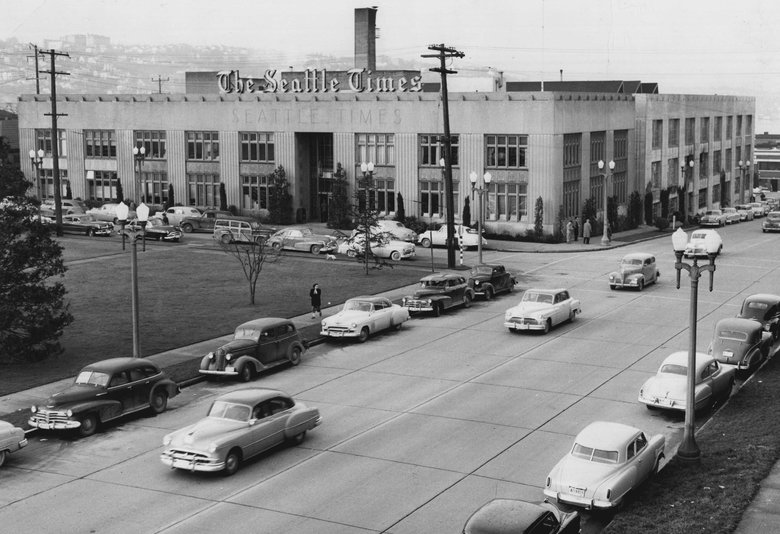 Why Does The Seattle Times Win So Many Pulitzers?

When the Pulitzers were announced this past week, there were no corks popping or champagne showers in the Seattle Times newsroom.  The winners and editors, distanced in their apartments and basement offices across the city, celebrated via email and Zoom.

But the virtual revelry was richly deserved.  The paper’s examination of Boeing’s alleged shortcuts in building the troubled 737 MAX required not just intricate journalism, but also the paper’s willingness to risk alienating Seattle’s economic powerhouse and thousands of employees – and readers — who depend on it for their livelihoods.

It’s not the first time.   The Times has now won 11 Pulitzers, six of them in the last 23 years, plus some 20 finalists.  That doesn’t compare with the New York Times’ 135 prizes over its history, but it’s an impressive track record for a relatively small, locally-owned newspaper effectively distanced in the far corner of the nation.

The more appropriate comparison is to other regional newspapers with no national presence –the San Francisco Chronicle, which has won six Pulitzers, or the Portland Oregonian with seven, or the Minneapolis Star with six.  These are papers whose work is, or has been, as good as the Seattle Times.  So why has The Seattle Times won more Pulitzers?

Luck helps.  Despite huge economic challenges and our President’s rantings, U.S. newspapers continue to deliver fine journalism, but most don’t win prizes. Bill Dietrich, my former colleague (and co-recipient of a 1990 Pulitzer) puts it this way: “If you win something, look up, praise the Lord, and then look down quickly before stumbling on the next crack in the sidewalk.”

The prize also involves some inside baseball.  Like some other papers, the Times probably benefited from the experience of editors who have been Pulitzer judges, so had an idea how to select and package an entry.

The Times remains one of very few locally owned newspapers in the nation. But that can break either way.  Local owners can be more courageous in their journalism, or less so.  In Seattle’s case, it eventually went back to luck when, some 35 years ago, power at the paper was transferred to a thickset and sometimes thick-headed guy by the name of Frank Blethen.

When I went to work at the Seattle Times in the early ‘70s, it was a financially successful but mediocre city newspaper, commonly (and not affectionately) known as Fairview Fanny.  The paper had won a 1952 Pulitzer for Ed Guthman’s gallant defense of a college professor who had been blackballed by McCarthy-era paranoia. And there were fine reporters like Bill Prochnau and Dick Larsen, editors like Henry MacLeod and Jim King.  But they labored in a drab newsroom culture furnished with bulky Underwood typewriters on gray metal desks and closely aligned with the Seattle establishment.

The aerospace reporter smoked cigars with Boeing executives, the editorial editor with the shady county prosecutor.  The newsroom was forced to cover the weekly Rotary meetings at the Olympic Hotel.  Most women were consigned to the “women’s pages,” which covered social events, food and fashion.  There was one African American reporter who wrote mostly traffic stories and obituaries.  The paper simply didn’t acknowledge the existence of a vibrant local gay community.

The Times politics were firmly Republican.  The editorial page had gone 70 years without endorsing a Democrat for President, the last one being William Jennings Bryan in 1908.  Democrats read the Post-Intelligencer.

The paper improved in the ‘70s with the arrival of Watergate-inspired boomers, especially Mike Fancher, who had learned his trade at the University of Oregon and as a reporter and city editor at the Kansas City Star.  Staffers were stunned when the paper won a 1975 Pulitzer for photography, which encouraged editors to give its reporters a longer leash. When Mount St. Helens erupted in 1980, the Times leaped on the story with coverage that became a Pulitzer finalist. (The winner was the Longview Daily News, which published in the shadow in the volcano.)  The following year, Paul Henderson won for his dogged work to prove that a Seattle man had been unjustly convicted of rape.  Two years later, Peter Rinearson took over the aerospace beat and won for his engaging series on the building of the Boeing 757 airliner.

Gradually, the paper was earning a national reputation while loosening its establishment ties, a transition accelerated after publisher Jerry Pennington drowned in a boating accident.  His hand-picked successor was Frank Blethen, a fourth-generation descendent of the paper’s founder. Frank grew up in Arizona and later ran the Blethen-owned Walla Walla paper.

Few Times staffers knew Blethen, and they were initially not optimistic.  He was young, mercurial, and lacked journalistic chops.

But newspapers were prospering in the 1980s, banking obscene profits while enjoying national prestige thanks to the work of the Washington Post and New York Times covering the Vietnam War and Watergate. To share in that prestige, Blethen would have to hire people who knew a lot more than he did about journalism.  One of his first steps was to break with the traditional pecking order and elevate the not-yet-40 Fancher to executive editor – in charge of the entire news operation.

“In one of our first conversations, Frank told me he wanted to empower the newsroom to act,” Fancher recalls.  “He didn’t want them ever going to a general manager or trying to find me to ask if it was OK to do what it took to cover a major news event.”

Blethen’s ambition was to turn the Times into the nation’s best regional paper, and Fancher’s skill at recruiting and keeping good people created the collaborative newsroom climate that made it possible.  From that point, Times Pulitzers went not to individual reporters but to teams of winners supported by unnamed editors, photographers and artists.

Another opportunity came In 1989 when the tanker Exxon Valdez slammed into a reef in Alaska’s Prince William Sound. While the oil spilled 1,500 miles from Seattle, editors convinced Blethen that it should be a Times story. The result was a 1990 Pulitzer that beat the competition from the national papers and networks alike.

Prize-worthy journalism is expensive, however.  The Valdez story took four reporters and others out of the daily mix for months.  The Times has continued to  recruit editors and reporters who specialize in investigations, draining resources from other jobs.  And rewards are mostly intangible, with little measurable impacts on ad revenue or circulation.

In contrast to his predecessors, Blethen showed an ornery, combative streak that took pleasure in shaking the city’s cage, challenging the local establishment. When the Times ran stories critical of labor practices at the Seattle-based Nordstrom Co, the Nordstrom family threatened to pull millions in ads.  But Blethen stood his ground, lost some ad revenue but earned credibility with his staff and the profession.

Along the way, the newsroom learned that Blethen’s blunt, macho style works both ways. When the Newspaper Guild representing journalists and other employees threatened to strike in 2000, Blethen fumed at the disloyalty and girded for battle. The union walked, and lost.

Since then, Fancher and other top newsroom managers have left, at least some of them following conflicts with the publisher.  The huge profits of the ‘80s and ‘90s are ancient history.  Like newspapers everywhere, the Times has been decimated by plummeting circulation and ad revenue, by repeated layoffs and slashed budgets.  The stately art deco office building and modern printing plant are long gone.

But Blethen and the paper continue to pursue gutsy journalism and prizes. From 1997 to 2014, the paper won five more Pulitzers for coverage of earlier troubles with the 737 jetliner, tribal housing, the murder of four police officers in South King County, methadone abuse, and the tragic Oso landslide.

And now another prize for another costly investigation that builds professional prestige, but probably not profits.

What’s next?  The Pulitzer Committee has begun to recognize and award prizes for digital journalism. And Blethen, who turned 75 this week, faces the daunting task of preserving his family legacy while navigating a course from ink and paper into a brave new all-digital world.

Ross Andersonhttps://rainshadownorthwest.com/
Ross Anderson is a founding member of the Rainshadow Journal collective. He retired to Port Townsend after 30 years of journalism at the Seattle Times.
Previous article
A Pandemic Gift: Stumbling Upon the ‘Good-Enough’ Life
Next article
New Numbers On Arts Losses, New Seattle Leadership at the Local and National Levels