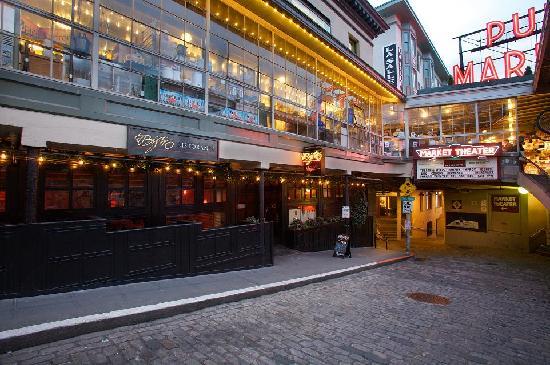 Field notes in a time of corona: Virus, Eats and Weed

The coronavirus crisis has stomped the restaurant and bar trade like a health inspector’s red tag. Tom Douglas, for decades the cheery face of Seattle dining, had already begun retrenching after rapid expansion; now he’s closing all his restaurants and keeping only his bakery open. Canlis will sell drive-up burgers and coffee, which sounds like an April Fool gag.

But life goes on defiantly in some havens. Last night il Bistro’s dining room was closed but its bar was packed with blithe revelers, including a couple from China. A few even shook hands and kissed cheeks.

Some former diners-out express sympathy and remorse at abandoning their favorite restaurants and say they’ll order deliveries. At first the sympathy focused on Chinatown restaurants, which got shunned following news of a strange new virus in Hubei. That slump may solve another problem. Last month, Assunta Ng, the publisher of the Seattle Chinese Post, told me, “A lot of restaurant owners complain to me they have a hard time finding workers.” The reason: so many were leaving their aprons and woks to go tend plants in marijuana grow operations.

“It’s a lot easier than washing dishes,” Ng added. “You work three hours and make as much as 10 hours in a restaurant.” But riskier: local authorities have been aggressively prosecuting illegal grow ops, many operated by Chinese immigrants. They say they’re trying to break up what one King County deputy prosecutor calls “large-scale criminal enterprises that have sprung up to grow and ship marijuana out of state.” Defense attorneys claim police and prosecutors are actually targeting naive ex-dishwashers just trying to make a better life.

Eric Scigliano
Eric Scigliano has written on varied environmental, cultural and political subjects for many local and national publications. His books include Puget Sound: Sea Between the Mountains, Love War and Circuses (Seeing the Elephant), Michelangelo’s Mountain, Flotsametrics and the Floating World (with Curtis Ebbesmeyer), The Wild Edge, and, newly published, The Big Thaw: Ancient Carbon and a Race to Save the Planet.
Previous article
Wanna Help? Don’t Buy Gift Cards—Buy the Stuff
Next article
Field notes in a time of corona: Liberal Hype or Democratic Hoax?