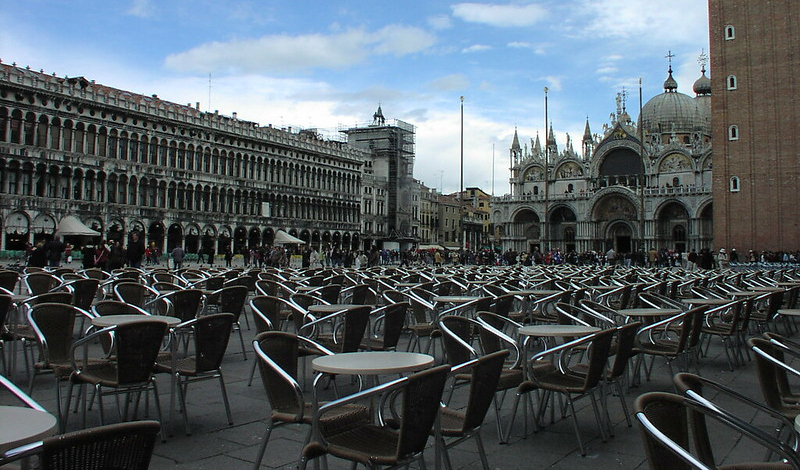 A couple of days ago, a colleague sent me a video that was taken recently in Venice. It was comprised of a ten minute walk through the city, accompanied by the strains of soft music from an accordion. There was no commentary or narration. It didn’t need any. I recognized most of the lanes, piazzas, courtyards, esplanades, galleries, and shopfronts from many times of visiting Venice over fifty years.

I had seen Venice in high season. Also in peak season, during the annual Carnevale. I had seen it in low season, when the city is serene and mysterious. I had seen it in shoulder season, with a comfortable array of people happily filling the cafes and lining up to pass through cathedrals and palaces. But I had never seen it like this.

There were simply no people, save for a handful of visitors wearing N95 masks and a clutch of black attired waiters with nothing to do but straighten vacant chairs. The coronavirus has scared potential visitors almost completely away. I’ve watched the video several times now. Each time I am shocked anew. Venice without people. Who knew that was possible? What came to mind was the closing scene of Stanley Kramer’s 1959 film “On the Beach,” with a newspaper blowing across an empty square in Australia to the mournful sound of bagpipes slowly playing Waltzing Matilda.

Last fall I was in Venice, toward  the end of the peak season. As I rode the tram in from the mainland quarter of Mestre, I counted ten massive cruise ships docked in the Port. Ten. I had never seen ten cruise ships together at once. Mentally, I calculated 2500 people per ship = 25,000 people. On top of all the many thousands of other people who found their way to the island city that day. That is insane.

Of course Venice has, for at least a couple of hundred years, been on lists of favorite places for people to visit. But in the last 20 years, the crowds of tourists have reached such a frequency  and intensity that the city is being torn apart – physically, economically, and socially.

Venice has been seasonally inundated with seasonal tidal waters for some time now; that is nothing particularly new. But in order to maneuver the enormous cruise ships along the Guidecca  Canal and up next to the old city, required deep dredging. And that opened the flood gates, almost literally to much greater volumes of water, reaching higher levels than ever seen before. At one point last year, the “alta acqua” was almost 20 feet. It doesn’t take much imagination to comprehend what that does to people’s lives and livelihoods. Worse, similar high water levels returned, multiple times, not long after each mess was cleaned up.

Visiting Venice in the 80’s I recall walking through real neighborhoods. Street markets seemed to magically appear overnight and be filled with residents and their baskets the next morning. You could easily tell the locals from the tourists as they lounged in cafes and ate their lunch in charming outdoor restaurants. The locals were in working clothes; the tourists were in sneakers, shorts, and branded T-shirts.  The quarter around St. Marks Square was always filled with pricey places to shop and eat and drink. I recall once foolishly paying more than $30 for two coffees and two pastries.

Once you left the passages and plazas packed with tourists, you could find the “real” Venice not far away. Meandering lanes, small courtyards , secret gardens, tiny lanes so narrow you could touch both sides. As you walked along, it was quiet enough to hear your own footsteps. From time to time you could pick up the sounds of an animated family conversation, forks clinking against plates of antipasti and pasta. Most of those families are gone now, having relocated to the mainland where housing is significantly less costly. With them went many local businesses, since replaced with trinkets shops or vacant storefronts. The craze for airbnbs consumed the housing stock, as owners could charge foreign travelers several times more than what they could as rental apartments. What was once a city of 160,000 residents is barely 1/3 of that today.

The economy of Venice has gradually succumbed to a serious and sad addiction to tourist trade. The cruise ships offload hoards looking for inexpensive tchotchkes they can cram into carry-on bags. What used to be a thriving artisanal glass-blowing community on Murano Insland has gradually been replaced with shops jammed with identical little glass baubles of comic book characters and generic “Venetian” beads. Other artisanal shops have disappeared; a favorite workshop where I had bought soft, hand-painted scarves is long gone. The place where I found a unique, spherical green vase is now a Benneton store- with merchandise identical to that found in New York or London.  An entire city’s long-recognized artistry has been all but wiped out. Its all about catering to the day trippers now.

The physical damage is virtually irreparable. Despite the vaunted “Mose” project to construct moveable tidal barriers across the waterways leading to the islands, the project has been mired in corruption, waste and technical dysfunction. Meanwhile, old wood piers and foundations beneath the beautiful palazzos are rotting. With the unrelenting waves of tourists, routine services such as mail delivery and food delivery is frequently impeded. And it certainly doesn’t help matters when some visitors feel free to take selfies of themselves swimming in flooded plazas or setting up camp stoves on the steps of the Rialto Bridge.

I have what is perhaps an unorthodox observation. The disappearance of crowds due to the coronavirus scare might actually be good thing. No city can thrive on a monoculture of mass tourism. The national government should be clamping down on housing used for airbnbs, granting low-interest loans to small business owners, and reducing the morass of paperwork and taxes that plague Italian commerce at all levels.

The municipality could attract a new cadre of artists by offering rent-free working space in now empty storefronts in return for committing to live in apartments above. Cruise ships should be banned completely from coming anywhere close to the old city; there are plenty of other places for them to dock in the region, even it is means a reduction in the numbers cruisers and less convenience for them.  The area now used by the Port for docking and supporting the cruise ships, as well as parking the cars of cruisers, should be converted to a new Venetian neighborhood, with housing built to contemporary standards and with no hotels allowed.

Auto and truck access should be severely curtailed. Yes, a dirty little secret of Venice is that an entire large sector is devoted almost entirely to the movement and storage of cars. The maps don’t highlight it, but its there. Cars should be stopped on the mainland and their occupants made to use the many buses, trains, and trams that already serve the island.

The thousands of now insanely lucrative airbnb units should be severely restricted, as other cities have done, to a maximum of 30 days per year. And perhaps a maximum allowable number as well; let’s say 5000. That would mean a more robust hotel industry, employing local folks, especially young people.

Venice needs to be returned to the Italians, and specifically to the Venetians, whose families made it what is it.  Otherwise, I fear, it is doomed to be a decrepit and decaying theme park.

Mark Hinshaw
Mark Hinshaw is a retired architect and city planner who lived in Seattle for more than 40 years. For 12 years he had a regular column on architecture for The Seattle Times and later was a frequent contributor to Crosscut. He now lives in a small hill town in Italy.
Previous article
An Idea for Over-Advantaged Seattle: Meet Me in St. Louie
Next article
On The Seattle Menu: Plague Mentality