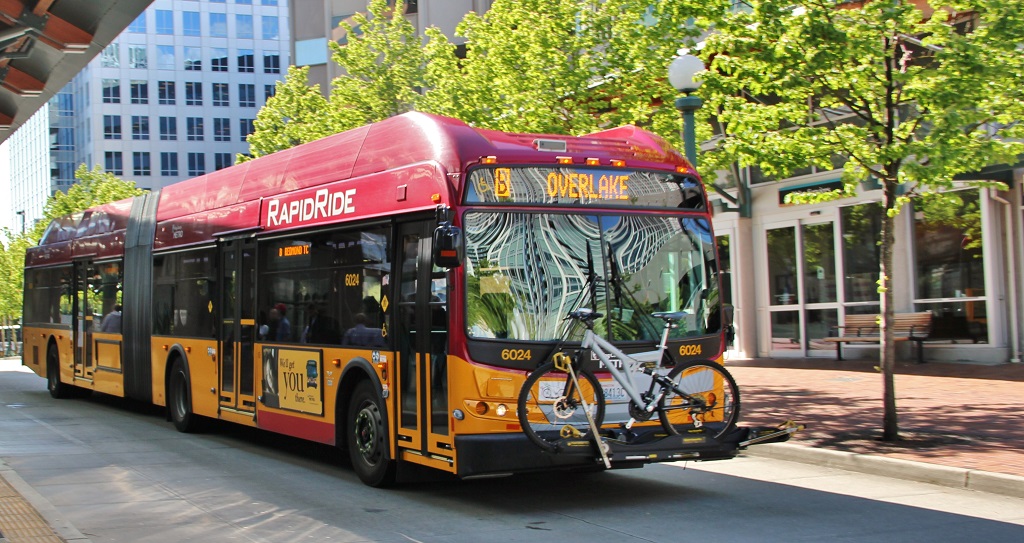 Transit vs. COVID-19: Bus cleaning can’t keep up. How about onboard sanitizer?

Think you’re struggling to figure out how to plan for COVID-19? Be glad you don’t run a transit system. The knowns and unknowns of the new coronavirus have got to weigh heavily on the operators of confined mobile spaces that thousands of people from anywhere and everywhere pack into each day.

The four major regional transit agencies’ websites lead off with statements as to what they’re doing to curb the virus’s spread. Passengers may not find these statements very reassuring.

All four agencies—Metro, Sound Transit, Pierce Transit, and Snohomish County’s Community Transit—emphasize that they are waiting to follow whatever protocols county health authorities come up with. In the meantime, they’re following their own cleaning schedules, which vary widely from county to county.

Pierce Transit has announced the most proactive cleaning schedule. The Tacoma-centered system “currently cleans and disinfects our buses at least once each day; we are intensifying that effort by adding extra cleanings and placing a focus on disinfecting ‘high touch’ areas, such as handrails and grab bars.”

Community Transit, which also operates buses between Snohomish County and downtown Seattle, performs a weekly cleaning, “including wiping down all high-touch areas.”

Sound Transit, which operates light rail, commuter rail, and inter-county express buses, hasn’t announced a particular cleaning schedule but says it will be “cleaning vehicles and facilities more deeply and frequently, and removing any vehicle from service until it is disinfected when there is a biohazard.” Cleaning will “focus on ‘high touch’ areas.”

Metro, which manages the downtown light-rail tunnel as well as King County buses, only gives its buses a “deep cleaning” every 30 days. Like the other agencies, it makes a point of noting that it sweeps up trash and promptly cleans up spills—but these are generally of less infectious concern than shiny, high-touch poles, rails and pull cords.

Metro’s site notes that it is “assessing what it would take to increase the pace of cleaning buses” and will hit high-touch surfaces more often. Cleaning, however, “is only part of the equation. Stanchions and handholds on a bus can be disinfected by our crews, but can become dirty again once the public touches it.”

All four agencies put the onus on passengers to avoid spreading germs. They recite rules we’ve heard, if not learned, since kindergarten: Stay home when sick. Cover coughs and sneezes. Keep a safe “social distance.” Don’t touch eyes, mouth or nose. Wash your hands and disinfect them when you can’t wash.

Perhaps the transit operators could help us on that last score. Hand-sanitizer dispensers are proliferating at local stores and other establishments, and getting heavily used. How about placing them on trains and buses and in the tunnel? They would even reach many of the unhoused and transient people who have too-few opportunities to scrub and sanitize.

But any slowing would likely be minor. And placing dispensers near the bus driver and in sight of the currently ubiquitous security personnel should prevent theft.

Metro’s media office didn’t return calls for information, but Sound Transit rep John Gallagher did. He couldn’t say whether his agency was considering sanitizer dispensers or any other specific measures: “We’re just starting to consider alternatives. We’re working with out partners [among them the other transit agencies] to determine what the best course is.”

Like everyone else, they’re just starting to play catch-up with a virus one-thousandth the width of a human hair.

Eric Scigliano
Eric Scigliano has written on varied environmental, cultural and political subjects for many local and national publications. His books include Puget Sound: Sea Between the Mountains, Love War and Circuses (Seeing the Elephant), Michelangelo’s Mountain, Flotsametrics and the Floating World (with Curtis Ebbesmeyer), The Wild Edge, and, newly published, The Big Thaw: Ancient Carbon and a Race to Save the Planet.
Previous article
Reclaiming Religion: Biden’s Charleston Speech
Next article
A New Owner for ‘Seattle Magazine’