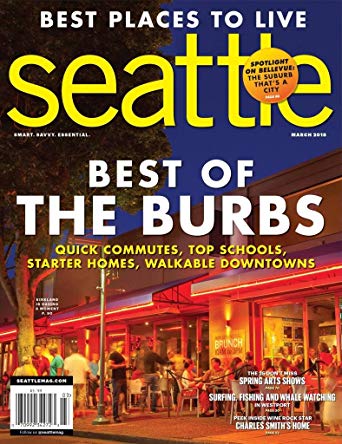 A New Owner for ‘Seattle Magazine’

Jonathan Sposato, a tech entrepreneur and chair of the board of Geekwire, has become the first tech owner of local media. He personally (not as part of Geekwire) has purchased out of bankruptcy Seattle Magazine, owned for the past 20 years by Tiger Oak Publishing in Minneapolis.

A little local magazine history, since the names and the owners get confusing. The original Seattle Magazine was started by KING Broadcasting in 1964, and it went out of business in 1970 during the Boeing Bust. I was pleased to be a writer for that magazine which, as the saying went, was ahead of its time — meaning, it offended key advertisers and other prominent figures of then-stuffy Seattle. It was the creation of Stim Bullitt, who ran KING Broadcasting in the 1960s, and brought in from The New Yorker a high-minded publisher, Peter Bunzel. Stim pretty much went down with the ship as the money-losing magazine was shuttered and Bullitt departed to write books and develop urban real estate along First Avenue.

Later, in 1976, Stim’s younger sister of environmental bent, Harriet Bullitt, started up a naturalist magazine called Pacific Search, which was distributed free to members of the Science Center in Seattle and Oregon Museum of Science and Industry in Portland. Eventually, “Search” evolved into a lifestyle magazine, first called Pacific Northwest and later Seattle. It reflected a bit of its origins with stories about nature and Northwest travel.

Presumably unhappy with all the lifestyle features of this genre of “city books,” Bullitt sold the magazine 20 years ago to Tiger Oak Publishing in Minneapolis. Its rival, Seattle Metropolitan, owned by a Portland publishing company, focused a bit more on upscale Seattle, fat with condominium and fashion ads. At the time, Seattle’s back-to-the-city, upscale economy was able to support two similar magazines.

These glossy magazines have prevailed longer than other print publications, as advertisers like the “happy urban problems” formula that prevails, including well-researched guides to best dentists and best burgers. Such ads stick around for a month on the coffee table or doctors’ waiting rooms. The articles are well-written and well-illustrated, and sometimes the stories make waves.

Still, the golden age of these city magazines (with notable examples in Philadelphia, Atlanta, Boston, New York, Dallas, Los Angeles and San Diego) has passed, and Tiger Oak’s Seattle Magazine earned a bad reputation for its extreme slowness paying freelancers. Sposato, an active startup investor and chairman of the online image editing site PicMonkey, wisely promises that under his watch the magazine’s digital platform will be enhanced.

He also sounds the usual local-pride notes about the city and its eponymous magazine:

“I was raised here and watched Seattle transform from a city known for sasquatch, Bruce Lee, coffee and airplanes, into a world-class metropolis on par with other iconic destinations across the globe,” Sposato said. “Not only are we home to the most valuable technology companies in the world, this city has also given birth to the most famous musicians, performing artists, business leaders, athletes, and of course Oprah’s favorite Mac “N” Cheese. Seattle is not dying, it’s thriving.”

David Brewster
David Brewster, a founding member of Post Alley, has a long career in publishing, having founded Seattle Weekly, Sasquatch Books, and Crosscut.com. His civic ventures have been Town Hall Seattle and FolioSeattle.
Previous article
Transit vs. COVID-19: Bus cleaning can’t keep up. How about onboard sanitizer?
Next article
Dear Liz And Bernie: Can We Talk?