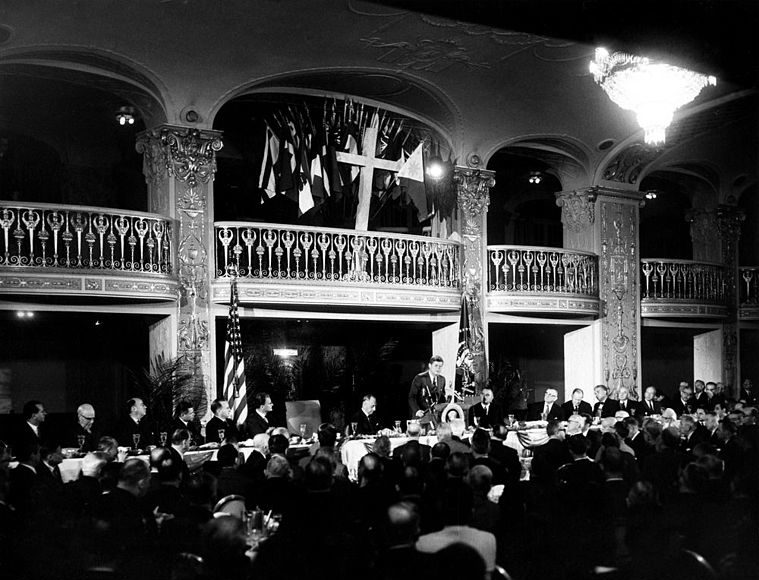 My experience with the National Prayer Breakfast (NPB) dates back to 1977 when I was part of a prayer group in the House of Representatives. We met weekly as a bipartisan gathering that put aside politics and policy in favor of faith and fellowship.

It is the Senate and House prayer groups that host the NPB annually, featuring the sitting president, a guest speaker, plus leaders who offer scripture and prayer to the 4,000 attendees, including 1,200 internationals.

I left Congress in 1988 but continue to be involved.  This year it began with an early breakfast on Capitol Hill with the state’s congresspersons that included Representatives Cathy McMorris Rogers (R), Derek Kilmer (D), Dan Newhouse (R), Suzan DelBene (D), and Kim Schrier (D).  Each shared stories about their personal lives and needs without any references to politics and issues. It was the day of impeachment, yet the word was never mentioned — it was more about fellowship in the room.

Later at the International Luncheon, it was inspiring to see Kenya’s President Kenyatta and former Prime Minister Odinga speak about bridging their contentious political rivalry and seek reunification. Sen. Chris Coons, a former classmate of the Kenyan president, concluded, “it was moving how these two leaders committed to humble themselves, to open their hearts and dedicate their nation to finding a path forward inspired by the divine.”

That evening, at the annual NW/Rocky Mountain dinner, I was asked to speak about the history of the National Prayer Breakfast.  I reminded them how it started in Seattle in 1943 with Abraham Vereide, a Norwegian who had been a horseback circuit-riding pastor in Montana before arriving in Seattle 1917.  He was pastor at a local church with a zeal for the poor, bringing together business and labor leaders that led to the founding of the Goodwill Industries.

In the Vereide group was Arthur Langlie, who later became mayor of Seattle and Washington governor. Langlie hosted the Mayor and later the Governor prayer breakfasts, which quickly spread to Oregon, California, and other states.

Ten years later Veriede found himself in Washington, D. C., assembling another select group of business and political leaders that began meeting at the historic Willard Hotel.  The group, including Vice President Henry Wallace, eventually moved to the U.S. Capitol, which was the beginning of the Senate prayer group. In 1952, Sen. Frank Carlson, a Republican from Kansas who had a close relationship with fellow Kansan Dwight Eisenhower, recognized the president had difficulties dealing the U. S. Senate and encouraged him to meet with the Senate prayer group. These steps led to what was called the President’s Prayer Breakfast, and later became the National Prayer Breakfast.

The Thursday morning National Prayer Breakfast is truly inspirational as thousands flow in to the Washington Hilton’s grand ballroom. The program’s co-hosts, this time Republican John Moolenaar and Democrat Tom Suozzi, offer opening comments that give testimony about the bipartisanship and even bonding of the prayer groups in the Senate and House of Representatives.

The guest speaker this year was Arthur Brooks, also from Seattle, a renowned author and lecturer, who talked about the biggest crisis facing our nation  — the crisis of contempt, the polarization that is tearing apart our society. Brooks ended on a positive note: “as we seek justice, we must love our enemies and bless those who persecute us.”

Then that revered moment arrives — the introduction of the President of the United States. In his previous appearances, Donald Trump has stayed on script. Not so this time. Trump approached the podium waving a newspaper headline “Acquitted.”  He began with, “Arthur, I don’t know if I agree with you,” then proceeded with a fury of words that were strikingly political and partisan. This was unprecedented and shocking.  As my head swirled around the room, I witnessed many standing up applauding, others seated and befuddled.

I was among the befuddled. Yet I remain hopeful that we will not abandon what the NPB is all about. That mission was well described by Ronald Reagan, who once said, “There are such diversities in the world, but prayer and fellowship among the great universe of God’s believers are the beginning of reconciliation. Man finds liberation only when he binds himself to God and commits himself to his fellow man.”

Don Bonker
Don Bonker is a former Member of Congress from Washington’s Third District and former chair of the House Foreign Affairs Subcommittee on Trade. He now lives on Bainbridge Island and consults on international trade issues.
Previous article
The Case Against The Growing Environmental Disaster Of Tourism
Next article
Election 2020: We’re Still Asking Who Gets to Vote