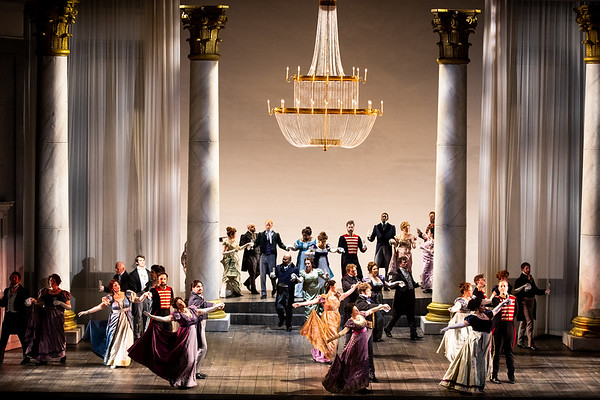 Every time I encounter Evgenyi Onegin I admire it more. Seeing the current staging at Seattle Opera (in a production commissioned by five companies) I suddenly realized how lucky we are to have it at all. If the poet who created the story and the composer who set it to music 40 years later had ever actually met, they would probably have disliked each other enough to make collaboration impossible.

Aleksandr Sergyevitch Pushkin (1799 – 1837) was a child of light, a rowdy, adventuring, womanizing poet who managed in the course of 37 hectic years to make the dowdy provincial Russian language into the most energized tongue of literary Europe.

Born three years after the meteoric poet died, Piotr Ilyich Tchaikovsky was sickly, depressive (they called it “neurasthenia” back then), and so weakly sexed that biographers still can’t decide if he was a sodomite (we call it “gay” these days).

By the time a friend suggested he might find good material for a libretto in Pushkin’s verse novel, it had become the founding classic of modern Russian literature, required reading in scit hools from Kyiv to Vladivostok, universally admired and popular by literate Russians as, say, Pride and Prejudice is among us. Apparently, Tchaikovsky had just never got round to reading it.

When he did, he responded to its narrative of young love misunderstood with all the passion he was capable. Then, two-thirds of the way through its composing, he received of a mash-note from a youthful former student.

Just like the moody, self-centered hero of the poem: a confession of eternal love written one sultry night by a naïve country girl to a man she has seen only hours earlier for the first time! The coincidence so struck Tchaikovsky that he fancied that he too, might be in love.

The resulting marriage lasted two and a half months. The opera has endured 140 years, and is still going strong.

It deserves its popularity. On first hearing it can seem a little pedestrian musically. There are none of the soaring, aching Tchaikovskian melodies that once heard, stick in memory ever after. Apart from a few passages—the letter scene in the first act, the lover’s dawn lament in the second, the feverish duet that ends the third—the vocal lines are conversational, accompanied by small motifs four or six notes long which seem meaningless as smoke rings curling in the air. But as the drama proceeds, these tunelets merge and intertwine to create a hazy atmosphere of gentle melancholy that perfectly reflects a story line focused on loss, the past, the sweet pain of regret.

That nostalgic mood is wonderfully supported by director Tomer Zvulun’s “concept” for the staging, and by Erhard Rom’s simple but versatile settings to contain it: slender beech trees against fields of grain, a gloomy winter dawn, ballrooms both provincial and majestic, which with a shift of light can freeze a mundane scene into an evocative image, a postcard from the past.

Vocally the principal singers in the the two casts are uniformly excellent: Marjukka Tepponen and Marina Costa-Jackson emphasize different aspects of the heroine Tatyana both as tender adolescent and queen of society, but both interpretations, one feisty and impulsive, the other painfully vulnerable, serve the character equally well. John Moore and Michael Adams differently nuance anti-hero Evgeny‘s shell of chill egotism and mannered gloom, but both also find their own ways to let us see the fearful emotions vacancy within him.

The ensemble supports them with distinction. The chorus in particular—whether playing happy serfs, smug provincial dignitaries or lofty aristocrats at the Imperial court—sing, act, and move so well that the numerous dance episodes are among the greatest pleasures of the evening.

I do feel one opportunity is missed in this production: to provide a dimension of the original poem to the drama that’s almost entirely missing from the composer’s libretto. Tchaikovsky’s personality was complex and ambiguous but one thing he lacked: a sense of irony. For him life is no laughing matter: one loves, one loses, one suffers, and only death awaits us.

Pushkin doesn’t disagree; but his reaction to our predicament is to smile, even laugh outright, at the absurd ways we try to deal with it, and there are many moments in the action of the opera, even as simplified and sentimentalized by the composer, where such ironies lie temptingly near the surface. Director Zvulun chooses to let them pass, even when audible chuckles show that the audience gets the joke even if he doesn’t.

But even somewhat hobbled, the drama achieves tragicomic grandeur in the hands of conductor Aleksandar Markovič. He takes his time setting a scene of seemingly placid country life, then minutely paces the soprano through the many musical beats of the her exalted “letter scene” to a beautiful climax. From that point onward, every scene, crowded or intimate, festive or solitary, moves the story relentlessly forward.

The musicians of the Seattle Symphony have long been a mighty asset in the pit at McCaw Hall; this time, under Markovič’s shaping hand, they excelled themselves, particularly the solo winds so important to Tchaikovsky’s sound palette. This is Maestro Markovičs’ US debut. I hope the Opera’s general director Christa Scheppelmann nails him down for future projects before word gets out.

Here end the thousand words I set out to write. There follow another 600 words paying tribute to the artist who, inevitably, gets little credit in reviews for his essential contribution to this opera. Alexandr Sergeyevich Pushkin, did, after all, invent the story of Evgeny and Tatyana, staking his growing literary reputation on a work quite unlike anything attempted before or since: a “novel” composed of 400-odd stanzas that look on the page like sonnets but aren’t; telling a story that might have seemed too slender to stand on its own to pithy raconteurs like Somerset Maugham or O. Henry; written from the viewpoint of a genial but just god looking down on his frail creations, mocking them fondly but never letting them off the hook; and cutting himself no slack either, daring the reader in aside after aside to identify him with his faux-Byronic-loner “hero”; and robing the whole heterogeneous mixture a language as elegant and and sparkling and heart-lifting as Mozart’s music.

Or so we’re told; because not one in a hundred of us who are touched by the plangent music of the opera is in a position to savor the cloud of radiant irony that transforms the poem from slightly sordid anecdote into a miniature masterpiece (you can read it in a long afternoon) of world literature.

It is in honor of Pushkin then, that I offer just one of those 400-odd stanzas which seems to me to capture much of what make Pushkin great. It’s one of several devoted to describing Vladimir Lensky, an inoffensive young fellow who has the bad luck to be chosen by Onegin as a companion primarily because there’s no one else worth talking with, riding with, shooting with, dining with in a good day’s ride in any direction.

In the opera, Lensky is treated with utter seriousness, and his aria while awaiting a duel to the death with a man he thought of as a friend (movingly rendered in this production by Colin Ainsworth) is the most emotionally intense music in the whole work.

In the poem . . . here is Pushkin’s Lensky, in Vladimir Nabokov’s revelatory unrhymed translation:

He sang love, to love submissive,
and his song was as clear
as a naïve maid’s thoughts,
as the sleep of an infant, as the moon,
in the untroubled wildernesses of the sky,
goddess of mysteries and tender sighs.
He sang parting and sadness,
and something, and the misty distance,
and the romantic roses.
He sang those distant lands
where long into the bosom of the stillness
flowed his live tears.
He sang life’s faded bloom
at not quite eighteen years of age. . . .

Pushkin is fond of Lensky, but he also knows that Lensky is a sap; just as he knows that his adored creation Tatyana is sedating her shyness and loneliness with lurid Gothic novels. He knows too that only one thing distinguishes he himself from innumerable other disaffected young Europeans who grew up thinking of themselves as tragically doomed Byronic loners: he was a poet; not a poète manqué like poor Lensky but the real thing, touched by the divine fire; he may well have suspected the truth, that he was a far greater poet than Byron ever was at his best: a poet “for the ages.”

I find I can’t resist one more bit of Pushkin, this time in his own voice, addressing the boy he once was from the solemn prospect of . . . not quite thirty years of age:

But anyway, as friends let’s part,
O my light youth!
My thanks for the delights,
the melancholy, the dear torments,
the hum, the storms, the feasts,
for all, for all your gifts
my thanks to you. . . .

Roger Downey
Born in Canada moved to Peru's altiplano at the age of six; came to the U.S. at 10 to discover that you don't use your feet to dribble the ball. Learned from the git-go that "America" is an idea, not a place.
Previous article
Advice to Democrats: Vive Les Cafes!
Next article
You’re Served: Standing Up To Sheriff Jimmy Clark In The 1964 Deep South