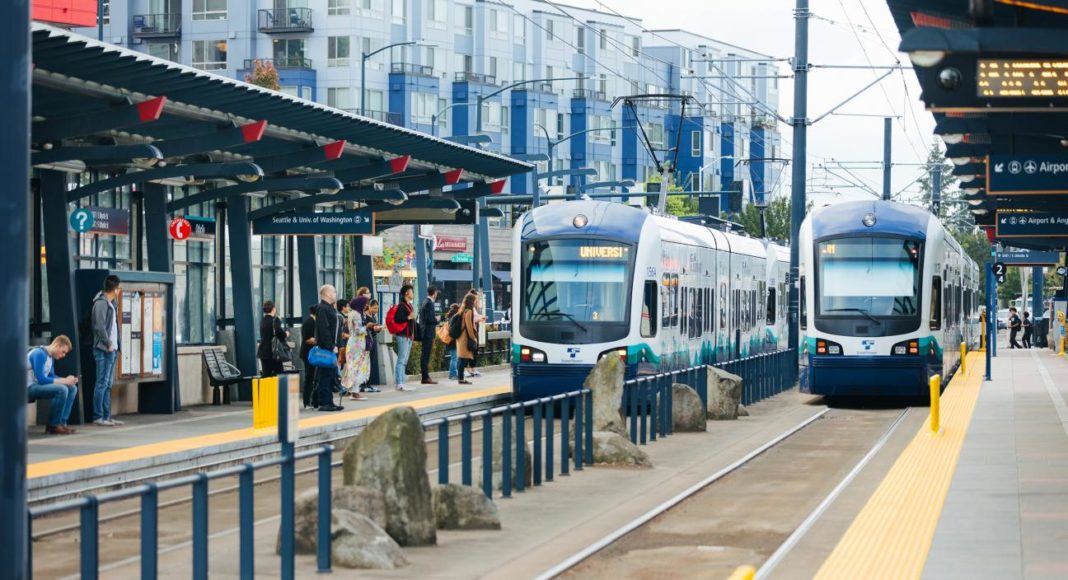 I often read  the inspiring tale of The Little Train That Could to my two-year-old granddaughter.  When she gets older, I should read her Bob Wodnik’s book, Back on Track – Sound Transit’s Fight to Save Light Rail, (Washington State University Press) because like that children’s book it is inspiring.

Wodnik served as the senior communications specialist from 1999 to 2017, for the Seattle region’s bus-rail agency, Sound Transit. He tells the inside story of how transit advocates fought against an array of formidable critics to build the multi-billion dollar Link Light rail train network, now running from the University of Washington to the SeaTac airport far south of the city for a total of 22 miles.

The book is not an analysis of how this system compares to other options that could have been pursued. Seattle would have been the only city in the country with a major monorail system but after passing four ballot votes, it was defeated on the fifth, and construction never began. There have also been proponents for building an alternative Rapid Bus System, using dedicated lanes. But it never came close to a city-wide vote, despite the advocates providing details and statistics on how such a system could work. And finally, some relied on just paving more roads instead of laying down rail – a solution attempted in other cities without lasting traffic congestion relief,  since usually the roads just fill as soon as they are built.

But getting broad public approval for building an urban rail system was not an easy sell to the public, especially after federal grants diminished. Approving a fixed-rail rapid transit for a city is one of the most contentious decisions that an urban populace can make. It is often rejected through popular votes, as has happened in Austin, Tampa, San Antonio, and Nashville. In Seattle, rail proposals were defeated at the election polls in 1968, 1970, and 1995.

Wodnik clearly recounts the internal problems that plagued Sound Transit’s initial debut. It struggled to gain credability after a massive budget gap was revealed, with some of the most influential regional players, like the Chamber of Commerce and the daily newspapers, suggesting that the project was a loser. Public officials, both Democrats and Republicans, including two former governors, Booth Gardner and John Spellman, two County Council members, Maggie Fimia and Rob McKenna, and two city councilmembers, Peter Steinbrueck and I, severely criticized its management for lack of transparency.

The turning points for Seattle came in 1988,  when a countywide advisory ballot to build light rail passed with 70 percent approval but with no costs attached. In 1996, when the scaled-back proposal, with costs identified, passed in the transit-rich portions of three contiguous counties, King, Snohomish, and Pierce. Their county councils would have representatives on the newly created Sound Transit board, which had the authority to build light rail, commuter trains, and rapid ride bus lines for the region. The bus lines became the work horses, out of the limelight but delivering early results. Commuter rail over existing private tracks, although struggling for ridership, did not create opposition like the light rail system.

In a suspenseful tale, Wodnik details how it took 13 years to open Light Link rail, fighting off opposition from eight different organized citizen groups, seven lawsuits, and often the two daily newspapers’ editorial pages. The transit agency was accused of ignoring the poorest neighborhood in Seattle, the Rainier Valley, where the trains were to be on the surface and not buried in a tunnel.

On the other hand, they were also accused of mission creep and buying off opposition as various interest groups argued for different rail alignments that best suited a business and residential community’s needs.  Given such competing objectives, which is typical in other urban rail projects, it is a wonder how they succeeded. Wodnik attributes success to hard work, luck, and a focused leader, Joni Earl.

Sound Transit’s main challenge was getting out solid and consistent information to the public. People often support the idea of rapid transit, but the details and cost dilute that support; focus groups strongly favored Seattle’s having a light rail system, but not so much when the details were revealed.

The biggest revelation occurred at the end of 2000, when the newly hired and highly competent Joni Earl was hired. The former city manager for Mill Creek and a trained accountant, Earl took only two months to discover that Sound Transit’s Link Rail cost estimates were $1 billion off and would take three years longer to finish the project than what was promised to the voters.

Multiple newspapers, including the Daily Journal of Commerce, skewered the agency for its arrogance. The Federal Transit Administration’s Inspector General undertook a two-year investigation to ferret out any fraud that may have occurred, holding up a $500 million grant that Sound Transit desperately needed. No fraud was found, but public trust in the agency was not shored up until the agency opened up its first stage of light link rail, running from downtown Seattle to the airport in 2009.

Wodnik presents both light rail critics and advocates fairly. The core supporters, however, were not the skeptical business leaders. Instead, all but one of the 18 major players he lists at the front of the book were Sound Transit employees and board members who believed that a public rapid transit system was desperately needed to meet Seattle’s tremendous growth. Between 1960 and 1990 the number of jobs in Central Puget Sound more than doubled, the population grew 82 percent, and the number of registered vehicles was increasing faster than the population.

Although Sound Transit’s Link Rail teetered on failure, it did get built. Some critics might claim that was because big money backed the project, but there was no evidence that building a light rail system was conjured up in some backroom deal. Instead, the increased traffic congestion in Seattle brought about public recognition that something had to be done to move people around in a better way.

In the end, Seattle’s Light Link rail’s success came down to the critical need for competent management of an enormous project. Wodnik strongly credits CEO Joni Earl for leading that agency through its rocky years to get Sound Transit back on track. Such leadership and continuous public oversight are needed to bring an urban rail system into any city, especially Seattle, which long lagged the nation in building rail transit.

Nick Licata
Nick Licata, was a 5 term Seattle City Councilmember, named progressive municipal official of the year by The Nation, and is founding board chair of Local Progress, a national network of 1,000 progressive municipal officials. Author of Becoming a Citizen Activist. http://www.becomingacitizenactivist.org/changemakers/ Subscribe to Licata’s newsletter Urban Politics http://www.becomingacitizenactivist.org/
Previous article
Who Would Do The Most for Cities? Mayor Pete or Mayor Mike?
Next article
Trump’s Clumsy Ploy to Help Jews Is Mostly a Political Wedge