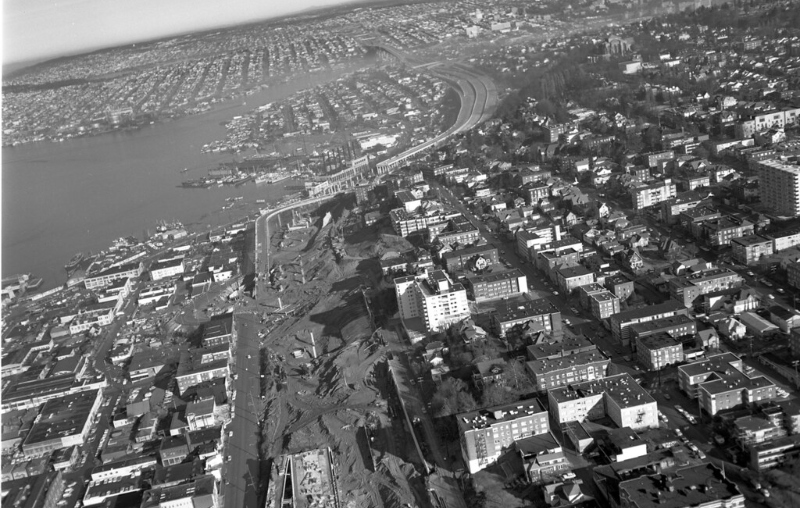 Forty years ago, Seattle was on the leading edge of a new wave of freeway lids, with the 1976 opening of Freeway Park over I-5. That wave continues. One lidding project, now beginning construction, will reconnect the city across SR-520 between Montlake and the UW.

Now the city is focused again on I-5, with blocks of new construction adding to the downtown convention center. The ditch that is I-5 has never seemed deeper or more foreboding to those crossing on the bridges from downtown to Capitol Hill. More lidding there is clearly the answer. A team of consultants is working on an ambitious feasibility study for a long one, extending north from Freeway Park.

Can the builder and owner of I-5, the Washington Department of Transportation, support new lidding across the ditch? Possibly. Current leadership is sympathetic with city concerns, and since lidding will create new urban land WSDOT might hope to capture some of that value to help pay for rebuilding the freeway. Sorting that out and funding the lid project will not be easy.

In the meantime, traffic on the old I-5 is slow and getting slower, and no politician wants to stand up for a costly construction project that creates years of snarled traffic and doesn’t result in new lanes. Some say the city and state are simply stalling, and they lack any official planning process, timeline, and funding source. Also, the concrete structure, almost six decades old, might collapse into itself if a major earthquake hits while the future of the ditch is still being debated.

One person has stepped into the planning vacuum. Integrate 5 by the pseudonymous Cheval Tepier, evidently a veteran urban planner, presents a highly detailed proposal for remaking the entire corridor into a multi-modal transportation asset for the city and region. It has the extra benefit of a fully urbanized lid, plus new parkland and urban development. (See this Post Alley assessment by former Secretary of Transportation Doug MacDonald.)

The Tepier book has been seen in the hands of some planners at City Hall, where I hope it gets serious attention. The book, which is available at the Seattle Public Library or from Elliott Bay Books (or on Amazon), gives us a vision for the whole ditch, not just the surface, by shifting the traffic from I-5 to two new tunnels to the east of I-5, and then reclaiming the ditch for public benefits. It’s clear that remaking this segment of I-5 will likely take decades and billions of dollars, and that it had better deliver a lot of value. That space inside the ditch is valuable, too.

Earthquakes concentrate public will. That’s one of the lessons of the Alaskan Way Viaduct (SR 99), the elevated highway that thundered over the waterfront and blocked Elliott Bay like a wall until this year. Now it’s gone. The Nisqually quake cracked SR 99. Studies of the damage eventually emboldened then-Gov. Christine Gregoire to place a deadline on the tear-down. Gribbles in the pilings and seawall that holds up the waterfront also helped concentrate minds. The process commenced, Seattle voters chose an alternative, and then Gregoire got together with Mayor Greg Nickels to choose a mighty single-bore tunnel for SR 99 under downtown Seattle. The waterfront park is still unfolding, but the author of Integrate I-5 seems to have taken a lesson from the eventual success of tunneling for SR 99, since his proposal includes two new bored tunnels to carry I-5 traffic.

That’s a lot of tunneling, but it may be necessary to make room for the optimum use of the I-5 corridor. Nor should we plan for another I-5 rejuvenation without considering rail transit. High-speed rail may come into play, with some proposing a system like Japan’s bullet train, linking Seattle with Portland and Vancouver, B.C. The I-5 corridor is the obvious link.

Tepier estimates the cost of his draft plan at $10 billion, which McDonald thinks is understated. Tepier writes that the cost for the entire SR 520 project from I-5 to I-405 at $6.85 billion in 2018 dollars. This large figure should remind us that transportation systems cost a lot, and if you count land, cars cost the most. Every car has to have room on the road and also a place to park wherever it stops.

When land is available and cheap, as it has been in most places and at most times in our history, then roadway and parking construction are the only real costs to taxpayers or private businesses. That’s the way it was during most of the highway-building era, including the time when SR 99 and I-5 were built. Things have changed. City land is not generally available for new roadway, and it’s very expensive to use for parking and other forms of vehicle storage. When I-5 and the first highway systems were built out, city land was a lot cheaper. Federal funding was far more generous. Moreover, a lot of the I-5 right-of-way was “taken” from private citizens through condemnation, at prices set by the state.

The only way to relieve traffic is to reduce demand.  One way is to offer alternative forms of transportation. Transit, especially rail, is expensive, but per-trip costs decrease as the system expands and ridership goes up. Smaller cars, ridesharing, bikeways, and autonomous vehicles can all help to make our existing paved roadways and highways more efficient and cost effective in the future.

Now more than ever, highways are a liability to built-out cities such as Seattle. These freeways create traffic demand, destroy urban neighborhoods, cut connections, pollute the air, and degrade the scenery. Elevated freeways and on-off ramps are the worst. Seattle has stopped more than one before, and removed the SR99 viaduct completely. (At the same time, it has also joined with the surrounding region to build a range of transit options to offset demand for highway capacity.)

“Lid I-5 or Get Rid of I-5?” by Lester Black in The Stranger suggests that we consider simply closing the section of I-5 that goes through downtown Seattle. Not a bad idea, if the city can’t find a way to rebuild the corridor so that it mitigates damage and serves multimodal transportation. Maybe we could close the freeway segment in question for reasons like earthquake dangers and constant air pollution?

So that brings us to the real question about I-5 and related development. What kind of future do we want? Are we ready to live in an urban bubble built around pedestrians and linked by transit, while other Washingtonians drive several trips every day in private vehicles, by choice or by chance—if they can afford it?  In other words, must we be divided by transportation systems—just like we seem to be in the rest of our lives?

That polarized vision would not be good for either region. I’m convinced, like the author of Integrate I-5, that the best future for this segment of the corridor is going to include a continuous roadway plus at least one set of ramps out to and in from the city. To quote from Integrate I-5: “The execution of I-5 was a mistake,” and, “The challenge before us is to maintain the vital connection I-5 provides, but also heal the damage [on Seattle] its construction inflicted.”

No one—especially state and city planners and officials—wants I-5 to become a battleground in the culture wars over cars, pitting Seattle against the rest of the state. But it’s going to take an enormous amount of planning, a lot of money, and a ton of process.  I hope it doesn’t take another earthquake.

Clair Enlow
Clair Enlow is a freelance journalist writing about architecture, planning and history. She’s a Loeb Fellow and an honorary member of AIASeattle.
Previous article
Baby Steps Toward a Regional Approach to Homelessness
Next article
Now Is the Time to Create a New, Third-Way Party