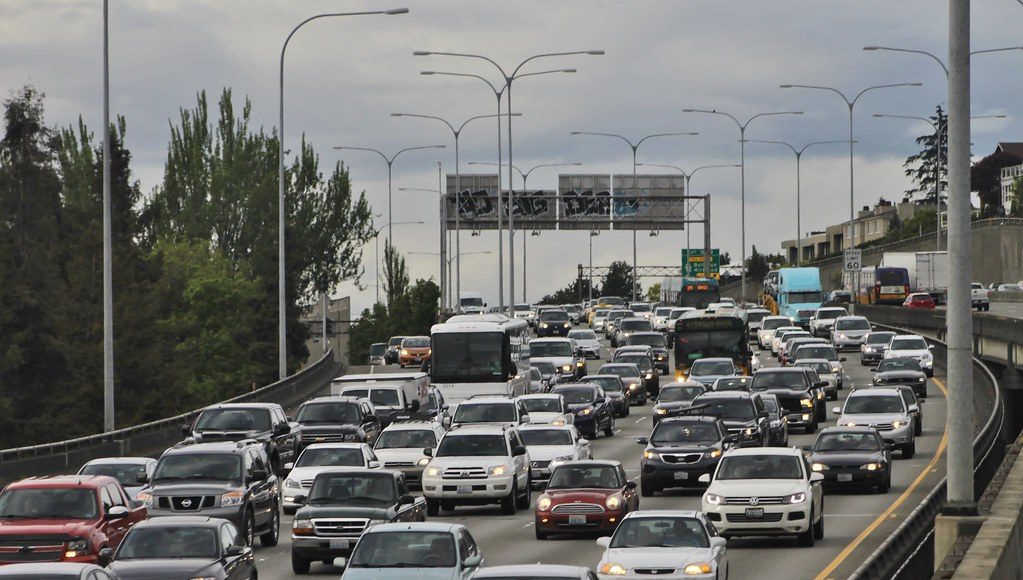 Seattle Scar: I-5 Ripped A Hole Through The City – An Anonymous Author Offers An Audacious Fix

We have a serious problem with Interstate-5 as it muscles its clumsy way through Seattle’s downtown. There’s a visionary new idea for what to do about it — move the traffic into new tunnels to the east. Or lid it. We’re running out of time.

But let me start with a personal note. In 1957 the Brooklyn Dodgers decamped from decaying Ebbets Field for Los Angeles.  The New York Giants abandoned the Polo Grounds for San Francisco. They played the first west coast major league game in April, 1958, the week of my thirteenth birthday.  In Seattle we only had Triple-A ball, the Rainiers, playing at Sicks’ Seattle Stadium on Rainier Avenue, and if you couldn’t get to the ballpark, radio announcer Leo Lassen, unquestionably a big leaguer marooned in Triple-A, had the signature home run call that was a pre-Space Needle Seattle icon.

Seattle had to get into the big leagues, and soon.  That would require a big-league ball field. Brandishing ruler and protractor from my pencil box on quarter-ruled graph paper, I created the obvious instant big-league ball park with a second deck on the 15,000-seat Sicks’ Stadium grandstand.  Seattle was a smaller city then, where lots of people were likely to know a pretty good selection of other people. My Dad knew John Spaeth, Seattle’s first city planner, who at about the same time was spearheading Seattle’s first Comprehensive Plan.  But Spaeth had a few minutes for a seventh-grader’s architectural vision and, as we would say today, he took the meeting, indulged and examined my schematic, and encouraged me to keep drawing big plans.

I had actually missed, however, the central question: Where was a big-league team going to come from to play at a bigger Sicks’ Stadium?  Not until a dozen years later did a hastily and inelegantly enlarged Sicks’ Stadium host Seattle’s single-season big-league misfits, the Seattle Pilots.

Neither planning nor architecture, as it turned out, became my métier. Which brings me back to the I-5 problem.

When I opened pseudonymous author Cheval Tepier’s Integrate I-5: Reimagining Interstate 5 in Downtown Seattle, I experienced the above flashback.  Had my ruler and protractor led me into a full career of visioning and expressing urban space, would I have acquired the skill and creative talent to produce such a rich and intriguing book?

“Cheval Tepier” will only describe himself as “a design professional who has worked in Seattle for over 20 years.” His clear writing and marvelous illustrations yield an insightful and compact accounting, even lane by lane, mile by mile, of how miserably I-5 through downtown Seattle serves and punishes us, five decades after the ribbon-cutting.  It was never designed for today’s crushing transportation demands – the sheer volume of traffic and the complexity of where all that traffic within and through the city comes from and wants to go. To say nothing of how obsolete and worn out and seismically challenged are its structures and pavements.

And so we have an aging behemoth concrete ditch through downtown. It has always seemed like a walled trough, but walking beneath the freeway one can see how much of it is built on columns and beams well above the natural hillside grade.   Nevertheless, a walled ditch is what we have. It divides the city from itself, spews noise and air pollution in every direction, and turns into a veritable parking lot for frustrated drivers during longer and longer peak travel hours.

That dismal accounting, however, is not chiefly why Tepier wrote this book.  Rather, his purpose is to promote a visionary solution. Which I can briefly summarize. Start by taking the I-5 roadway from roughly its I-90 interchange near Dearborn to the Lakeview Boulevard East crossing at the north of downtown and just move the darn thing into newly-bored tunnels running under First Hill and Capitol Hill. I-5 as we knew it then would be relieved of duty through downtown.

We would get big dividends in repurposing the current I-5 trough now serving traffic. In its place traffic would cruise through twin tunnels and the city would gain open space, including six expanded or new parks, and nearly 2 million square feet for development.   Reconnected streets would reunite what I-5 severed. Relief, at least for some, would come from the air and noise pollution the highway visits on its neighbors.

Tepier’s tunneling project to achieve this transformation is the opposite of modest.  Two parallel 2.9-mile-long tunnels, one for northbound lanes, one for southbound, each at 61 feet diameter, thus EACH requiring 40 percent more material mined by a boring machine than Bertha extracted for the new viaduct replacement tunnel.  Plus an ancillary parallel smaller-scale tunnel between them for utilities and emergency escape. Altogether that’s a whole lot of tunnel.

Tunneling experts, flush with the excitement of challenge, might nonetheless caution that geotechnical, design, constructability and cost barriers of boring such tunnels under Seattle are no slam dunk.  Not to mention the huge carbon expenditure of tunneling construction. But we are reckoning here with vision, so niggling objections are not to be over-weighted. Tepier urges this could be done, if it were willed to be done.  Like a lot of vision quests, that may well be true.

Tepier’s further closely-engaged attention is revealed in detailed renderings of ramps and interchanges that would knit new underground lanes into existing I-5 from the south and to the north, including I-90 and SR 520 connections. This is really complicated stuff.  The care and elegance with which it is worked out suggests that this is not pseudonymous Tepier’s first highway ramp spaghetti rodeo.

There are some tricky conflicts with proposed ST3 tunnel alignments to be resolved. Then there is the puzzle of how deeply-buried tunnels might be unable to pop ramps out of the hillside or to accommodate in-and-out-of-downtown traffic (think Seneca and Union ramps).  Tepier solves that by salvaging for local access some of the old I-5 right of way. I will say, though, that hanging on to even a vestige of old I-5 as a new local access roadway to be re-branded “Salish Way” smacks a bit of putting lipstick on the pig.

The best of Tepier’s tour de force, though, is page after page, true to the book’s title, depiction of old I-5 air space into re-connected streets, downtown parks and all those enticing new development parcels.  This is a heady vision yet drawn to the detail of every street and block you yourself may know. Very illuminating. Great fun. Obviously, a long labor of love.

Other Seattle urbanists have for some time pumped enthusiasm into Lid I-5, a far more restrained proposal than Tepier offers.  While Tepier rolls out a near utopian vision, the more prosaic, still ambitious, Lid I-5 proposal is lumbering through a $1.2-million very limited, consultant-heavy, process-mired, Seattle Department of Neighborhoods I-5 Lid Feasibility Study.  The study aims to answer whether new lids could be built, largely putting that question within the discipline of the structural engineers.  The preliminary conclusion reached in September seems affirmative, though the ultimate costs will doubtless produce sticker shock.  The study doesn’t encompass specific lid uses, planning, design or costs.  Decisions about  the future of I-5 itself are outside the scope.  Next April, the study only promises to lay out what needs to be studied next.

Perhaps a little cowed by Tepier’s sweeping proposal, mainstream urbanist  comment seems to retreat into Don’t Make the Perfect the Enemy of the Good.  The Good being Lid I-5, an idea long ago proposed by architect Paul Thiry as the downtown Seattle route of I-5 was being built. Yet this lidding proposal consists now only of the City’s promise of endless meetings questing toward something that might actually, maybe, someday, happen.  But with no surer prospect of funding or implementation than Tepier offers.

Meanwhile, there’s an even more radical proposal explored in this article in The Stranger. The Stranger article would simple scrap I-5 through downtown Seattle, leaving all the traffic to fend for itself and opening up acres of land for urban development. The author of this idea is Doug Trumm, a local writer and the publication director at the Urbanist. And so the bidding war goes!

Now let’s turn to the big problem with Tepier’s and other Go Big programs.  It’s actually buried in the tunnels. Not whether they could be built. But how they would be used.  The sum of it supplied by Tepier: four (three?) regular travel lanes and one (two?) HOV lane(s) in each tunnel.  Basically the capacity and function of I-5 today. As to how they would function? That, says Tepier, would be up for further study.

Stop right there. For $10 billion (I think the estimate is low) and into two decades of schedule (I think the schedule is hopelessly unrealistic) we need to get more and better for transportation than a replication of today’s I-5 in some tunnels.  Tepier, absorbed in urban form and land use, dodges and defaults on the question that must have equal footing in any serious look decades ahead for the I-5 corridor through Seattle: What transportation job will the I-5 corridor in downtown Seattle have to evolve to fulfill, and how? This realization is not so very different from my failing 60 years to appreciate that big-league baseball had to be about who would take the field, not just building a grandstand upper deck.

There is no question we must envision, invest in, and transform the transportation future of the I-5 transportation asset.  We have no choice. We must rescue ourselves from its daily and ever-worsening strangulation of people and goods backed up on it and everywhere in Seattle to which its congestion ripples.  That investment must go together with redeeming the I-5 corridor from its land use devastation and its pollution assaults. It will be a future that will include more population growth and economic activity, certainly around Seattle and probably in it, and a lot more transportation demand.

Here are some things I see in my crystal ball for our region’s transportation future:

Next.  Who is planning for the future of I-5’s transportation task? 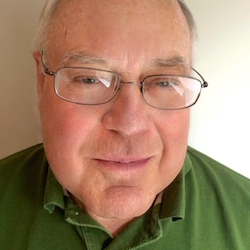 Doug MacDonald
Doug MacDonald has served as chief executive in infrastructure agencies in Massachusetts (Greater Boston drinking water/wastewater) and Washington State (Secretary of Transportation, 2001-2007). His best job was fifty years ago as a rural extension agent in the Peace Corps in Malawi in southern Africa. He has written on the environment, transportation and politics for professional and general publications for many years.
Previous article
Model Of Reinvention: Seattle Symphony At A Crossroads
Next article
Epic Traffic Jam: Exactly Zero Action To Fix I-5’s Looming Crisis