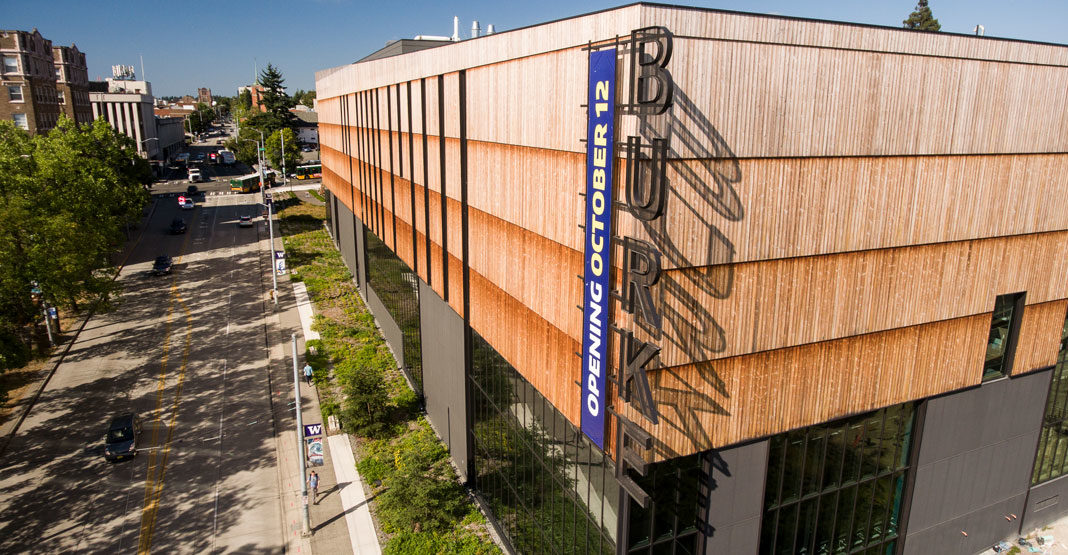 Old Bones And Natural Wonders: Inside The New Burke Museum

As a college student, I worked briefly in my university natural history museum’s bone lab on a very old and interesting human skull. The skull, found in a Middle Eastern cave years before, was in fragments. Hardened mud caked the fragments, and I used dental tools and a weak acid solution to get it off. I worked in a big room with few if any windows, cardboard boxes piled with human bones rested on tables, and human skeletons hung here and there. A door opened into the room from a corridor closed to the public.

One afternoon, I heard a group of kids, no doubt AWOL from a school field trip, in the corridor.  They stopped in front of the door. Someone threw it open. They looked in and saw . . . a guy in a white lab coat attacking skull fragments with a dental drill surrounded by hanging skeletons. They shrieked, slammed the door, and ran back down the corridor.

I thought of that the other day when I attended the new Burke Museum’s press preview. The Burke — the state museum of natural history — has long stood in the northwestern corner of the University of Washington campus. The old Burke, built in the 1960s – as an institution, the Burke dates back to 1885, but it didn’t get its own building until the year of Seattle’s World’s Fair —  was shut down at the end of 2018 and is now a hole in the ground. The new one, designed by the noted Seattle architect, Tom Kundig, standing right against 15th Avenue, will open on October 12.

The old one had no climate control — when the humidity changed, staff members could hear the 8,500 baskets stored on shelves behind the scenes creaking as their fibers expanded and contracted — and had limited exhibition space. Most of the collection sat backstage, on shelves, in drawers, where the public never saw it.

The new Burke will be very different: climate control, of course, plus more exhibition space — and big windows into the work and storage spaces. Not only stored objects, but also the people who prepare and study  them will be on public view.  Visitors will now see the museum as a place in which people work.

The Burke is evidently the first museum in the world to open virtually all its work spaces to public view. A curator says that at first, some staff members were skeptical, but by now, everyone seems all in. Certainly, everyone I talked with seemed very up about the new place and the prospect of working in it.

To reach this point, literally millions of specimens had to be moved between old museum and new, across a construction site enclosed by chain link fence. Next Spring, visitors will see a carpet of blue as a small camas prairie blooms there —  Washington’s once-extensive camas prairies are just about all gone; this will hint at what used to be — but for now, it’s just mud.

Most of the stuff traveled in carts. Some really heavy objects were lifted by cranes belonging to Skanska, the general contractor. And some particularly delicate items — including 2000-year-old glass found on Cyprus — were hand carried on pillows by people walking very carefully while other people scanned the ground ahead of them for obstacles. (I like to imagine a procession of people bearing jeweled relics on velvet cushions, but of course, that’s not how it was.)  Because of the chain link, there weren’t many security concerns, says Burke PR manager Andrea Godinez, but when the dinosaur bones were moved — which would have made a sure-fire press event — just to be sure, the Burke didn’t tell anyone.

The transplanted dinosaur remnants include the menacing T-rex skull now displayed on the third floor. The fully-assembled skull wasn’t a feature at the old museum.  The excavation that unearthed it didn’t even start until 2016.   And skulls like it don’t feature in many other places.  There are ubiquitous images of America’s favorite prehistoric monster –think Jurassic Park, pictures large and small, probably millions of tacky greenish plastic effigies, even a small version in what looks like gold lame suitable for hanging on your Christmas tree. Despite all that, curator of vertebrate paleontology Greg Wilson explains that very few T-rex skulls have been found. And none is better than this; the Burke’s T-rex skull is the only one that contains all the original bones.

Visitors can see it and, nearby, the giant ground sloth skeleton that was unearthed during construction at Sea-Tac airport. But they’ll just have to imagine the mummy that a board member bought at an Egyptian gift shop and donated to the museum at the turn of the last century.  The Burke still has it, but it’s not on display.

After T-rex, I look into a work room where people in safety goggles bend over bone fragments that they’re cleaning with abrasive wheels on dental drills.

Despite the increased exhibit space and all the windows, visitors won’t be able to see everything all the time.  The museum has the world’s largest collection of bird wings, explains ornithology collections manager Rob Faucett, and except for an array of wings that will be displayed to show how each is adapted to specific conditions, most of it will remain stored until someone is working with part of it.  Visitors will see whatever is being worked on at the moment.  The result will be a de facto rotating exhibit.

We look into an ornithology work room.  On a table rests a heap of fluffy white feathers.  Nearby, a guy is wrenching a long bone from the leg of a defunct goose. Those views into work spaces won’t all be pretty, Faucett says.  Indeed.  Those kids who peeked into the bone lab learned that lesson long ago.