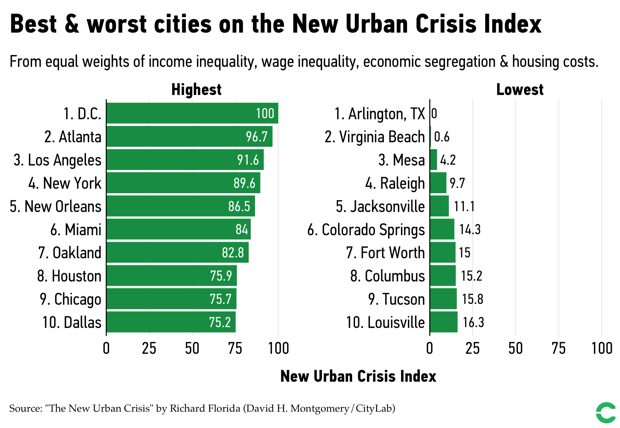 The New Urban Crisis: Did Seattle Not Make The List?

Last week Richard Florida (of Rise of the Creative Class fame) published a series of four pieces on CityLab trying to make connections between growth of cities (where people are moving to and away from), higher education (percentage of citizens in cities with college degrees), and where creative class workers live; with the rise and renewal of America’s cities. Then he looked at cities locked into what he calls the New Urban Crisis (high levels of inequality, economic segregation, and unaffordability) to check for overlap. Seattle tops three of these lists and is missing from the fourth. But the no-show is likely not the category you might think.

No surprise, Seattle ranks first in population growth between 2012-17

…but doesn’t crack the top ten in job growth:

When it comes to college degrees, Seattle is again No.1 (by a substantial margin):

When it comes to where “creative class” workers choose to live, a group Florida defines as workers in knowledge workers, techies, and cultural creatives, Seattle ranks No.2:

Finally, in the fourth piece in this series, Florida ranks cities with the highest levels of inequality, economic segregation, and unaffordability:

Given the high cost of living and out-of-site housing costs in Seattle, it’s a surprise not to see the city make the top ten. Certainly the issues that seem to get some of the most attention here are related to those on Florida’s New Urban Crisis list. Florida believes that the crisis facing American cities today is very different than the one that hollowed out urban centers in the 60s and 70s:

“The original urban crisis of the 1960s and 1970s was a crisis of economic failure, spurred on by the movement of people, jobs, and industry to the suburbs; the hollowing out of city economics; and the concentration of poverty and economic disadvantage in urban centers. The New Urban Crisis is a crisis of success, brought on by the movement of affluent and educated people, and of knowledge and tech jobs, back to the urban center.”

So what explains Seattle’s absence from the top tier? Florida’s bigger point in this series was to draw a distinction between greater metro areas and cities proper. But even there, the greater Seattle area doesn’t conform to his thesis:

“While superstar cities and leading tech hubs bear the brunt of the New Urban Crisis at the metro level, when it comes to cities, it is felt in fast-growing Sun Belt cities like Miami, Houston, and Dallas (even with their more lax land-use policies that make it easier to build housing than in their coastal counterparts); and more economically challenged cities like New Orleans.”

Douglas McLennanhttps://www.artsjournal.com
Doug is a longtime arts journalist, and the founder and editor of ArtsJournal.com, he's frequent keynoter on arts and digital issues, and works with a number of arts organizations nationally.
Previous article
CNN’s Climate Crisis Marathon: So Many Good Plans, So Little Status Quo Sanity
Next article
Bye Bye, Coffee Bean: No More Howard Schultz to Kick Around