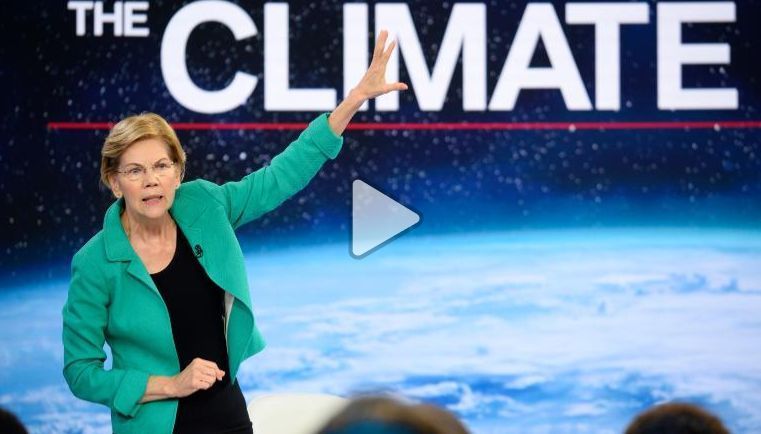 In these times of despair over climate doom and the United States’ surrender of global leadership on the existential threat, it was uplifting to hear such passionate and detailed plans for averting the obliteration of Planet Earth from all 10 leading Democratic presidential candidates at the CNN climate forum Wednesday night.

It was especially encouraging to hear them talk about the importance of international alliance on this problem that knows no borders or ideology. Any one of the 2020 Democratic hopefuls would bring the United States back into the Paris accord and work with allies and adversaries alike on our shared peril.

Elizabeth Warren was on fire. Her energy is infectious. Her detailed “I’ve got a plan for that” on everything and her confident responses on “how-can-we-possibly-do-all-this?” questions were reassuring. She came across as the most vibrant and competent of the pack.

Cory Booker’s articulate, honest, take-charge performance was inspirational. His answers to questions from CNN moderator Don Lemon and audience alike were rapid-fire and informed. He must have rehearsed long and hard but nothing he said seemed practiced. He even conceded he didn’t know much about geo-engineering (who does, outside of the MIT geek squad?)

Pete Buttigieg was earnest and impressive, and – oddly, considering he’s the youngest of the pack – the most persuasive in pushing the idea of this being a new Greatest Generation moment challenging America’s best and brightest to act boldly before it’s too late.

Joe Biden had his best moments in an otherwise unexceptional performance with his insistence that “This is the United States of America.” But he couldn’t finish his thought coherently that we can do anything we put our minds to doing. He needs to stop prefacing every comment with, “The fact of the matter is…” Who are his advisors? – they’re doing a terrible job. It won’t go well for him in forums like the CNN marathon that allowed the other candidates to appear more composed, clear-spoken and connected with younger voters.

Kamala Harris, after good debate performances, is now coming across as too cautious and noncommittal, prone to sound-bite spewing rather than impassioned ideas. Amy Klobuchar shone on farm-belt issues and bolstering of the beleaguered middle class. She’s a solid product of the heartland but that may not be enough to take her beyond the next downsizing of the still-overcrowded field. Ditto Beto O’Rourke. He did better than in the 20-candidate debates but was eclipsed by Warren and Booker. Andrew Yang is probably too quirky to survive much longer, but his intelligence and out-of-the-box proposals for social equity and all-in technological advancement are breaths of fresh air. Wouldn’t it be
great to have a president who believes in math, science and honesty?

Why aren’t Donald Trump’s supporters not bothered by a leader with access to the nuclear football who takes pride in not reading, rejecting the advice of security and intelligence experts and the overwhelming majority of climate scientists warning of global devastation?

Bernie Sanders got a lot of applause from the mostly young audience with his free-everything-for-everybody proposals. Prediction: He will fall on his plan to encumber America with double-digit trillions of dollars invested in revolutionary transformations put in the hands of government agencies. Even most Democrats will bristle at the idea of handing off the nation’s future to the purveyors of “good enough for government work.”

Footnote: Gov. Jay Inslee came in for praise and credit from most of the leading 10, a tribute to his influence on the climate issue and its afterlife now that he’s returned his political sights to Washington.

Carol J Williams
Carol J. Williams is a retired foreign correspondent with 30 years' reporting abroad for the Los Angeles Times and Associated Press. She has reported from more than 80 countries, with a focus on USSR/Russia and Eastern Europe.
Previous article
Understanding The “Broken Windows” Theory: a reading list
Next article
The New Urban Crisis: Did Seattle Not Make The List?