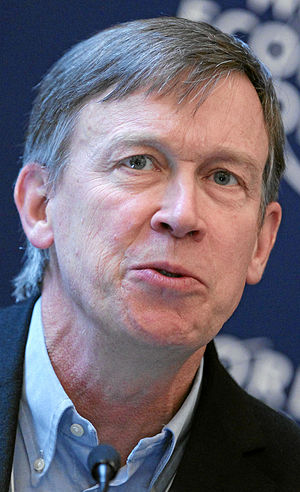 Hickenlooper Out? – But First An Inspirational Arts Story

It looks like the presidential campaign of former Colorado Gov. John Hickenlooper is coming to an end. Key advisers are leaving, and the pressure grows to get Hickenlooper to run for the Senate.

The campaign always was a long shot, mostly based on Hickenlooper’s attractively quirky personality and creative centrism. His final fling was to achieve some visibility as the one Democrat willing to decry “socialism.”

I met then-Denver Mayor Hickenlooper in October, 2003, when I arranged for him to meet a group of arts activists for a private discussion at Town Hall Seattle. We were intrigued by Denver’s much-admired arts funding scheme, which Hickenlooper (rare among mayors) strongly advocated. He inspired the group mightily, and thus began a long, so-far futile effort to duplicate the Denver funding scheme for Seattle arts.

The Denver scheme arose out of a late-1980s funding crisis for four of the region’s biggest cultural institutions, when the Denver Art Museum, the Denver Zoo, the Museum of Natural History and the Denver Botanic Gardens were told by the city that their funding would be slashed by $2 million.

The proposed mechanism added a .01 per cent sales tax – or one penny on a ten dollar purchase – over seven counties, which generated millions of dollars in relatively unrestricted annual funding for cultural groups big and small. The money was allocated simply and predictably. Once a group qualified, it got a grant based on two factors: budget size and audience size. (Smaller groups had to compete for funds.) Voters get to approve the mechanism every 7-10 years (it gains support each round in Denver area), and in exchange for this funding, arts groups are encouraged to lower ticket prices and do more educational outreach.

Last year the fund gave away about $60 million to almost 300 arts organizations.

Following the Town Hall pep-rally, then-ArtsFund head Peter Donnelly and others including me tried to find a way to import this idea to Seattle, where unrestricted and reliable public funding for the arts is feeble. The Chamber of Commerce took a look and passed.

Then one day Jon Shirley, then chair of the Seattle Art Museum board, was chatting with his museum counterpart at Denver and was amazed to learn that Denver’s Scientific and Cultural Facilities District, as the fund is called, sends several millions a year to the museum, while SAM got only several hundred thousand of public dollars. The Denver approach now had a champion, and Shirley steered it to the Puget Sound Regional Council to study and advocate for the idea.

The first setback was when consultants asked major corporations like Microsoft what they thought about the idea. Make it about arts education, they predictably replied. The next hurdle was 4Culture’s long effort to preserve state funding from stadium taxes for King County arts, so we had to get in line. The third setback was when other counties and cities outside Seattle refused to join the effort, fearful of Seattle’s dominance. The fourth hurdle was Speaker Frank Chopp, who tied the grants to educational and outreach efforts (as well as his passion for low-income housing). The concept finally got authorization by the Legislature, subject to a vote of the people in King County. That vote finally came in August 2017, when Prop. 1, “Access for All,” was defeated. (Won big in Seattle, tanked on the Eastside.)

In other words, 14 years of effort, too many competing agendas, and confusion by too many consultants. So: no cigar. The idea may come back for a subsequent vote, but meanwhile funding priorities for politicians and foundations and corporations have shifted from the arts to social services and education. The result is Seattle, like many other cities that tried to emulate the Denver model, came a cropper and burned up a lot of advocates.

That may not be all bad. Critics of the Denver plan suggest that the funding formula doesn’t encourage risk-taking or pushing boundaries. Indeed, it might seed complacency. The security of stable money allows arts groups to plan and to take care of the basics. But because the funding formula is weighted based on size of audience and budget and not on how artistically compelling an organization is, from the outside it looks like many of the funded groups have merely cruised along.

While the Tier One groups get a guaranteed slice of the money – and it’s substantial – the smaller groups have to fight for their share. Some of the those smaller organizations grumble that they deserve more based on their work.

The proof may be in what the Denver arts scene produces. The SCFD boasts of the 11 million people who attend arts events in a year and that 1.2 million students get an arts experience every year. While the Denver Art Museum has a flashy new Libeskind-designed building and there are some notable successes, the fund hasn’t produced anything like an arts Golden Age in its 29 years. And in national assessments, other cities – including Seattle – continue to outpace Denver’s accomplishments

All of which points to the truism that money can’t substitute for visionary leadership. Is Denver better off for its significant investment in culture? Absolutely. Might it have produced better results by using more of the money to strengthen its infrastructure rather than pouring the vast majority of it into basic guaranteed income for its arts organizations without more expectation on what’s being delivered? Very likely.

The fund encourages arts education, and there has been plenty of it. But arts groups can perfunctorily fulfill this obligation to meet the ed requirements, and all this activity hasn’t exactly created eager new generations of arts consumers.

Still. Denver’s assured funding for arts and culture was a visionary act, and has proved popular with residents who have voted to extend it, when asked. Thought we didn’t similarly succeed in Seattle, I’m still glad we once heard John Hickenlooper preach to the local choir.