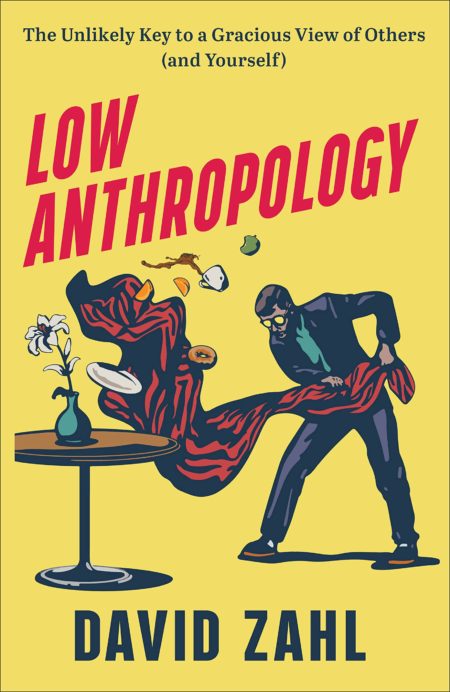 Commencement addresses are often exercises in what Dave Zahl calls “high anthropology,” as graduates are told that they are special people of unique promise, “leaders of tomorrow,” and need only follow their passion and dreams to succeed.

Steve Jobs’ Stanford commencement address fit this bill perfectly as he urged graduates to “have the courage to follow your heart and intuition . . . they somehow know what you truly want to become.” Kind of “you’re amazing . . . be amazing.” I’ll tell you who really loves that stuff — the parents who’ve just shelled out half a million for their kids education. Still, what Jobs had to say was pretty typical of the genre which features lofty ideals, high-minded phrases and lots of barely concealed self-congratulation all around.

At the opposite end of the spectrum might be Anne Lamott’s counsel. “Everyone is screwed up, broken, clingy, and scared, even the people who seem to have it more or less together. They are much more like you than you would believe. So try not to compare your insides to their outsides.” Though this was not a commencement address it isn’t difficult to imagine how parents of grads at a top school might react on hearing their offspring told, “Everyone is screwed up, broken, clingy and scared . . .” WTF’s would be rumbling through the family section.

Dave Zahl contrasts Jobs’s and Lamott’s wisdom as he opens Low Anthropology: The Unlikely Key to a Gracious View of Others (and Yourself). Zahl admits that initially Jobs’ words probably sound inspiring while Lamott’s may seem off-putting, even harsh. “But,” continues Zahl, “say you had a tough week, spoke insensitively to a loved one, or fumbled the ball at work. Lamott’s description might strike you as more accurate. You might feel recognized by her words and a little burdened by Job’s exhortation.”

“Lamott’s admission conveys compassion. You can feel your shoulders unknot. Jobs’s advice? Not so much. His words convey pressure. This is the great irony of low anthropology: what sounds insulting is actually liberating, and what sounds liberating at first is actually oppressive and embittering.”

That is pretty much Zahl’s book in the proverbial nutshell. How, as the subtitle has it, a more realistic assessment of the human condition leads to compassion not only toward others but toward yourself.

It is a much needed antidote to our driven, meritocratic, focused-on-externals and appearances society. Motivational speakers tell you that you can be enjoying “your best life ever” (and if you’re not it’s your own damn fault). Advocates of the meritocratic system assure themselves that their outward success mean they are superior humans. And young people, but not just young people, are constantly comparing themselves to the dazzling photos and “having an incredible time here in” posts of peers on social media. It is a world without grace. It goes a long ways toward explaining our “mental health crisis.”

Zahl’s book has many virtues, including being only 200 pages long. It is chock-full of entertaining stories and illustrations, as well as gleanings from all sorts of contemporary and classical writers and thinkers. Beyond that, the author is writing as one of those who knows the ways in which he too is screwed up, broken and scared. But if you’re worried that means you’ll be hearing a “poor me” or “poor you,” lament for 200 pages, forget it. Low Anthropology is, paradoxically encouraging, funny, even joyful.

Zahl is a Christian and writes as one, but in doing so he challenges a misconstrual of Christian faith that I have both shared and struggled against for many years. This misconstrued version of the faith is, as someone put it, that God wants “our noble selves” (the cleaned up us), when all this time what a gracious God wants, seeks and loves is “our real selves.” Not who we think we should be, but who we really are.

Back in the day when I was at Plymouth Church in Seattle some folks took to describing it as “a place where lawyers go to cry.” I think what that meant is that people in very high-pressure occupations experienced there a grace that wasn’t often part of their regular world. They could let down. As Zahl observes toward the end of his book, “Even more than a place to come together, it (the church) is a place to fall apart. And there is always room for a few more faces.” Enjoy!

Anthony B. Robinsonhttps://www.anthonybrobinson.com/
Tony is a writer, teacher, speaker and ordained minister (United Church of Christ). He served as Senior Minister of Seattle’s Plymouth Congregational Church for fourteen years. His newest book is Useful Wisdom: Letters to Young (and not so young) Ministers. He divides his time between Seattle and a cabin in Wallowa County of northeastern Oregon. If you’d like to know more or receive his regular blogs in your email, go to his site listed above to sign-up.
Previous article
After-Action Report: Abortion was No. 1 Issue in November Midterms
Next article
2022 in Joe Biden: International Report Card