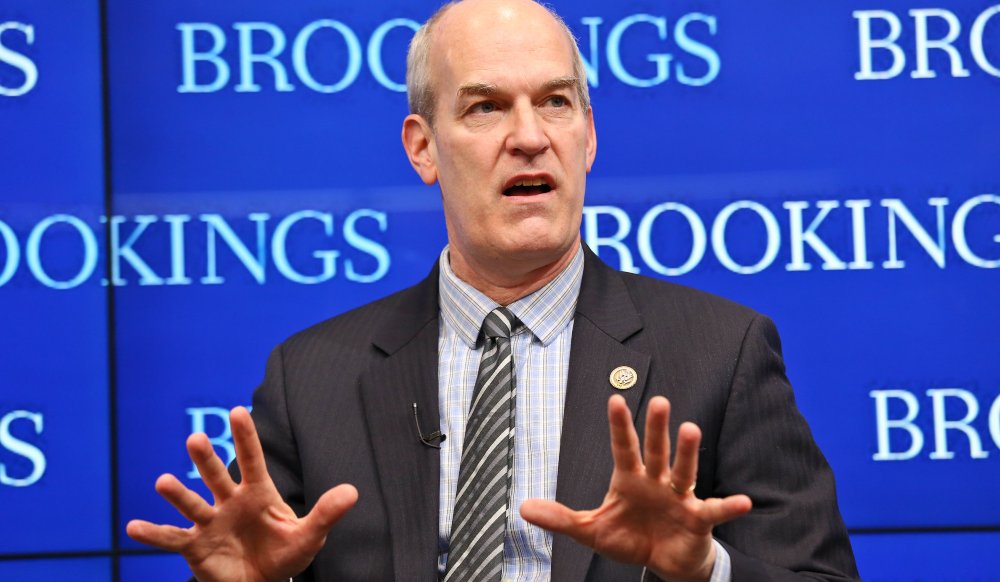 The Rise of Rick Larsen

U.S. Rep. Rick Larsen, whose Congressional district includes Boeing’s Everett assembly plant, will be ranking Democrat on the House Transportation and Infrastructure Committee when the new Congress convenes in January. He is positioned to chair the powerful panel if Democrats reclaim the majority.

Larsen will succeed outgoing committee chairman, Oregon’s Rep. Peter DeFazio, who is retiring after serving 36 years in Congress.  Larsen beat out Eleanor Holmes Norton for the Democrats’ top job. Larsen has served as chairman of the panel’s Aviation Subcommittee.

The prospects of Larsen being called “Mr. Chairman” will rest, in some part, on the success of his next-door neighbor in the Washington Congressional Delegation.  Rep. Suzan DelBene, D-Wash., will chair the Democratic Congressional Campaign Committee, charged with winning back a majority for the D’s.

The Republicans will hold a 222-213 advantage come the start of 2023.  It’s already looking lie a shaky majority.  Maladroit House Republican Leader Kevin McCarthy has not lined up enough GOP votes to be elected Speaker.  In his hunt for votes, McCarthy is leaning on support from ex-President Donald Trump and kowtowing before attention-seeking extremists of the Freedom Caucus.

In Congress, good things come to him (or her) who waits.  Larsen was elected in 2000 from the Second District in Northwest Washington, flipping a seat held for six years by Republican Rep. Jack Metcalf.  The district was previously represented by a trio of influential Democrats, U.S. Reps. Henry Jackson (later senator), Lloyd Meeds, and Al Swift.

Although twice reshaped, the urban-rural-island Second District has, in words of a Swift quip, “every problem known to man with the possible exception of wheat rust.”  Its lawmakers have brokered wilderness and park battles, dealt with problems at the U.S.-Canada border, been embroiled in Boeing’s labor pains, and found themselves lobbying to allow school kids to pick strawberries during summer break.

Larsen has gone six terms without a tough reelection contest. He has, however, experienced troubles with the left wing of the Democratic Party, such resistance stemming largely from his sitting on the House Armed Services Committee.

During a Bellingham forum after the 9/11 attack, Larsen was booed for giving an equivocal but critical answer when asked how he would vote on Iraq war authorization. Days later, he voted against going to war. He has been heckled at Whidbey Island town meetings over loud jet noise from Naval Air Station Whidbey.  Over the last three years, however, Larsen has sharply questioned the Navy over the racket made by Growler jets practicing over Coupeville, Port Townsend, and the Ebey’s Landing National Historical Preserve.

Larsen is a hands-on lawmaker.  He has been all over the Second District explaining benefits of the bipartisan infrastructure law. It is paying off: Lummi Island is getting $12 million ferry for a new ferry.  Similarly, Larsen has staged multiple information sessions to outline help available to local governments and small businesses under the American Rescue Plan.

With Sen. Patty Murray, he championed creation of the 103,000-acre Wild Sky Wilderness Area in eastern Snohomish County. He joined Sen. Maria Cantwell in the successful push for President Obama to designate the San Juan Islands National Monument.  Larsen took to a kayak off Lopez Island when the monument was dedicated.

A humorous, lanky guy – nicknamed “Ichabod” by one former Swift aide – Larsen has a sense of the occasion.  He has been required to display the patience of Job in a district where vocal extremes of the left and right take advantage of his accessibility. He has even shown up at Tea Party candidate forums in Whatcom County.

In 2009, at the high tide of Tea Party protests, rival crowds of tea baggers and union activists turned out for a Larsen town meeting.  He defused tension by inviting all to rise and sing the national anthem. Under Bush II, with Dems fresh in the House majority, Island County Democrats pressed Larsen to support an impeachment resolution.  He responded by listing all the issues (e.g. raising the minimum wage) on which Congress needed to act.  Where better to spend time?

As future chair of the Transportation Committee, Larsen’s greatest challenge may come in his own district.  He represents thousands of Boeing employees. Boeing is a proud, unionized workforce with a history of building the world’s best commercial jets — but also a cost-conscious, corner-cutting Boeing management which put a flawed Boeing 737-Max in the air.

Joel Connelly
I worked for Seattle Post-Intelligencer from 1973 until it ceased print publication in 2009, and SeattlePI.com from 2009 to 6/30/2020. During that time, I wrote about 9 presidential races, 11 Canadian and British Columbia elections‎, four doomed WPPSS nuclear plants, six Washington wilderness battles, creation of two national Monuments (Hanford Reach and San Juan Islands), a 104 million acre Alaska Lands Act, plus the Columbia Gorge National Scenic Area.
Previous article
Baseball on the Clock? Er… No!
Next article
The Mariners have Slipped in the Off-Season. Another 20 Years in the Deep Freeze?