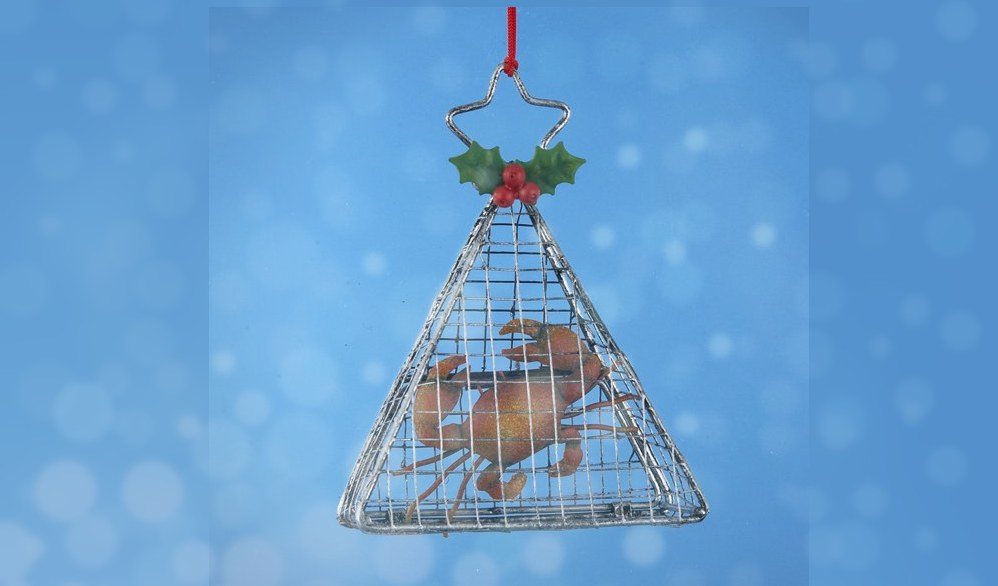 ‘Twas the night before Christmas in the City of Dreams.
Not a townie was stirring – after curfew, it seems.
The crab pots were hung and the crabbers reposed
Since Dungeness season was finally closed.
The children were snuggled as if in a coma
Induced perhaps by the pulp mill’s aroma.
And Mom in her ‘jammies, and I my pullover
Were trying to sleep off our Yuletide hangover.
When out ‘cross the bay there arose such a sound
That I sprang to the window and hollered: “Pipe down!”

The Moon on the crest of this lovely occasion
Shone oddly green off that grim Naval station.
But then there appeared o’er the bay a phenom’non –
An airborne purse seiner, pulled by eight flying salmon!
And high up at the helm was a plump bearded chap
Wearing foul weather gear and a fisherman’s cap!
And I suddenly realized like a blasting bazooka
‘Twas our fabled explorer – Senor Juan de Fuca!

More rapid than seagulls that winged vessel came
And Juan issued commands to his fishes by name:

“Now Sockeye! Now Coho! Now Big Fat Chinook-a!
“Pull harder!” yelled Cap-i-tan Juan de Fuca.
“To the top of the courthouse! To Kai Tai Lagoon!
“To those towering smokestacks! (But don’t fly through the plume!)
“To Sirens, to Docs, to Aldrich’s Market!
“I’d stop for sushi, but there’s no place to park it.”
They flew past Boat Haven, over aging Victorians,
And noted the places that need more restorin’.
All over Uptown that wooden boat flew
With its team of wild salmon and ol’ Fuca too.

Then from my roof came the strange pitter-patter
Of fins and tails flopping like fish out of water.
And one moment later came a thunk so surreal –
The violent landing of that purse seiner’s keel.
As I drew in my head and was turning around,
Out of the bathtub Fuca appeared with a bound.
He was draped in green raingear, from his toe to his head,
(Because, he explained, you can’t buy them in red.)
His boots were all drenched from his ocean excursion
And his oilskins were dripping on our favorite Persian.
He was jolly and round, delightfully droll
And he greeted us all in pure Espanol.

“Feliz Navidad!” he exclaimed with great pleasure,
Then reached in his pack and pulled out some treasures:
The kids received candy and chocolate and yummies.
I got a phrasebook called: “Spanish for Dumbies.”
There were goodies for loggers, for Elks and Rotarians,
For Baptists and Buddhists and odd Unitarians.
There were books by Steve King and even Shakespeare
And birth control pills for the damn blacktail deer.
He brought tissue and gift wrap destined for dumpsters
And new MAGA hats for the neighborhood Trumpsters.
There were fine coats and sweaters, and lovely new burqas,
And citizenship papers for Puget Sound orcas.
With each special gift he dug into his pack.
More Amazon boxes to be promptly sent back.
With that, Juan de Fuca hoisted his bundle
And announced: “That’s all for now. Gotta rumble.”
Then he shrugged, smiled and wiggled his nose,
Waved “Adios!” And up the drainpipe he rose.
“Vamanos!” he yelled to his team. “Time to roll!
“Before we get busted by the Border Patrol!”
The seiner and salmon lifted off like a feather
And whistled away into December weather.
But I heard him shout back: “In my heart, I’ll be wishin’
“Merry Christmas to all, and now I’m going fishin’.”

Ross Andersonhttps://rainshadownorthwest.com/
Ross Anderson is a founding member of the Rainshadow Journal collective. He retired to Port Townsend after 30 years of journalism at the Seattle Times.
Previous article
Career Advice: I Ask ChatGPT About My Prospects as A Wine Critic
Next article
This Year it was Terse: It Could Be a Verse