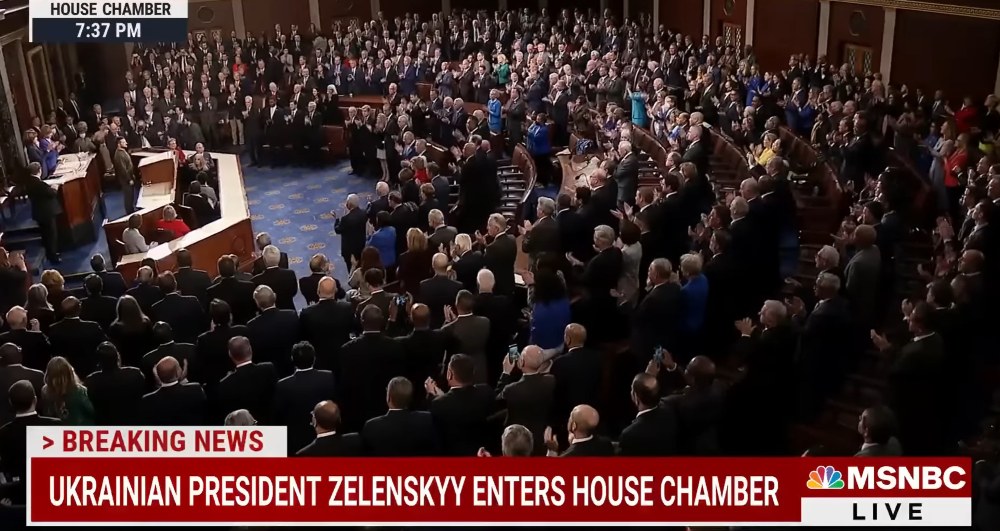 Masters of our Fate: Zelensky Takes Washington by Storm

Ukrainian President Volodymyr Zelensky’s stealth visit to Washington served as a poignant reminder to Americans that Ukraine’s fight against Russian invaders is a battle pitting defenders of freedom against autocrats like Vladimir Putin bent on grabbing power through conquest and subjugation.

In a plea to President Joe Biden and the U.S. Congress, Zelensky eloquently laid out the stakes for Western democracies if the Kremlin leader prevails in his unprovoked war ravaging Ukraine. If Putin defeats Ukraine, Zelensky said, he would continue his quest for a new Russian empire by invading territory in neighboring NATO-member states, an aggression that would trigger U.S. obligation to come to its allies’ defense.

“Your money is not charity,” the charismatic Ukrainian leader said of $50 billion in military and humanitarian aid already provided by Washington. “It’s an investment in the global security and democracy that we handle in the most responsible way.”

Zelensky’s address to a joint gathering of the U.S. Senate and House of Representatives evoked comparison with a similar appeal by British Prime Minister Winston Churchill in December 1941, the last address to Congress by a wartime ally.

“I hope my words of respect and gratitude resonate in each American heart,” Zelensky said, patting the Ukrainian national emblem embroidered on the chest of his olive drab fleece.

Putin has suffered staggering losses of men and munitions in the war he launched 10 months ago. The Kremlin leader who invaded on Feb. 24 with expectations of the Kyiv government capitulating within days, is said by Western intelligence agencies to have run out of the sophisticated weaponry needed to turn around a stalled ground war.

Despite a “partial mobilization” of 300,000 Russian recruits announced in September, Putin’s disjointed forces consisting of private mercenaries, ruthless Chechen fighters and a poorly trained and ill-equipped Defense Ministry infantry have been forced to retreat from the few major cities they captured in the first weeks of the war. As rockets and artillery have run short, Russia has turned to Iranian-made killer drones to attack Ukraine’s power grid and other civilian infrastructure.

“Just like the brave American soldiers, which held their lines and fought back Hitler’s forces during the Christmas of 1944, brave Ukrainian soldiers are doing the same to Putin’s forces this Christmas,” Zelensky said, comparing his country’s daunting winter hardships to the grim advent of the Battle of the Bulge. Military and civilians alike face a Christmas by candlelight this year, he said, “not because it’s more romantic” but because Russian attacks have left huge swaths of the country without electricity, heat or running water.

Zelensky, a former comic actor with dismal approval ratings until the Russian invasion, has rocketed to international admiration for uniting his citizens in fierce defense of their post-Soviet independence. His forces’ unexpected success in driving back the invaders from Kyiv in the first month of the war also inspired uncommon unity among the 30 member states of NATO and the European Union, a political alliance representing 500 million people in 27 countries. The 44-year-old Ukrainian president was bestowed with the prestigious Person of the Year designation by TIME magazine this month, as were the 43 million citizens of Ukraine.

“The world is too interconnected and interdependent to allow someone to stay aside and at the same time to feel safe when such a battle continues — our two nations are allies in this battle,” he told U.S. lawmakers and the Biden Cabinet in a speech interrupted repeatedly by rousing standing ovations.

Zelensky’s first foray out of Ukraine since the Russian invasion started 10 months ago was motivated at least in part by threats from far-right Republicans to cease sending weapons and aid to Ukraine once control of the House of Representatives shifts to a slim GOP majority on Jan. 3, 2023. Rep. Kevin McCarthy, (R-CA) is so desperate to become House Speaker he has been cutting deals to win over Trump sycophants like Marjorie Taylor Greene (R-GA) who has pledged “under Republicans, not another penny will go to Ukraine.”

Two other right-wing extremists still on board with the former president’s bromance with Putin, Lauren Boebert (R-CO) and Matt Gaetz (R-FL), could be seen seated and pointedly scrolling on their cell phones when the rest of the congressional chamber was on its feet, many wiping tears from their eyes in the presence of a man who has rallied his nation and the democratic world to defy Russia.

Zelensky secured one clear victory on his visit of less than half a day in easing the Biden administration’s hesitancy to provide sophisticated Patriot missile defenses to counter Russian long-range rockets and bomber aircraft. At a joint press conference by Biden and his Ukrainian guest, the leaders were asked by a journalist in Zelensky’s press delegation why the United States wouldn’t supply Ukraine with everything it needs to defeat Russia “sooner rather than later.”

Biden said the provision of weaponry “fundamentally different” from the defensive capabilities given to Ukraine so far could risk “breaking up NATO and breaking up the European Union,” hinting at compromises made to maintain unity within the Western blocs.

NATO leaders, especially those from vulnerable countries on Russia’s borders, have expressed fear of Putin escalating the conflict in retaliation for more direct Western involvement in Ukraine. Among those asks the Biden administration has been reluctant to fulfill are a no-fly zone Zelensky has appealed to NATO to impose and transfer to Ukraine of Soviet-era warplanes left in the arsenals of former Warsaw Pact allies that are now independent countries and members of NATO.

The United States and its allies are “not looking to go to war with Russia. They’re not looking for a third world war,” Biden said.

The symbolism of Biden pledging before the cameras and the eyes of the world to provide Zelensky with “whatever it takes, however long it takes,” could not have been lost on Putin. While Zelensky journeyed to Washington to be assured of U.S. and Western allies’ commitment to see Ukraine defeat the Russian Goliath, Putin visited the Belarus capital of Minsk to pressure one of his few allies to back his disastrous attempt to conquer Ukraine. There was no definitive word on whether Belarusian President Alexander Lukashenko agreed to supply troops, weapons or training to augment the stumbling Russian deployment — beyond the use of Belarusian territory offered earlier to facilitate Putin’s initial drive to take Kyiv.

“Zelensky made his historic trip at a crucial moment in what future generations may come to view as one of the defining conflicts of our time: the battle between democracy and autocracy, in which Ukraine today is the blazing, blood-soaked, shivering front line.”

Zelensky’s speech to Congress drew comparisons with Churchill’s address to a bicameral gathering after the Japanese attack on Pearl Harbor. The British leader made a similar appeal to President Franklin D. Roosevelt to come to the aid of European allies under attack by Nazi Germany to ward off the spread of fascism across the continent.

Echoes of Churchill’s appeal for patience and courage in expectation of  “a long and hard war” could be heard in Zelensky’s words.

“When we are doing the noblest work in the world, not only defending our hearths and homes, but the cause of freedom in every land, the question of whether deliverance comes in 1942 or 1943 or 1944, falls into its proper place in the grand proportions of human history,” the British leader told Congress 81 years ago. “Sure I am that this day, now, we are the masters of our fate.”

Carol J Williams
Carol J. Williams is a retired foreign correspondent with 30 years' reporting abroad for the Los Angeles Times and Associated Press. She has reported from more than 80 countries, with a focus on USSR/Russia and Eastern Europe.
Previous article
Rise of the “Nones” How Americans Turned Away from Religion
Next article
Musical Chairs for Local Episcopal Leaders