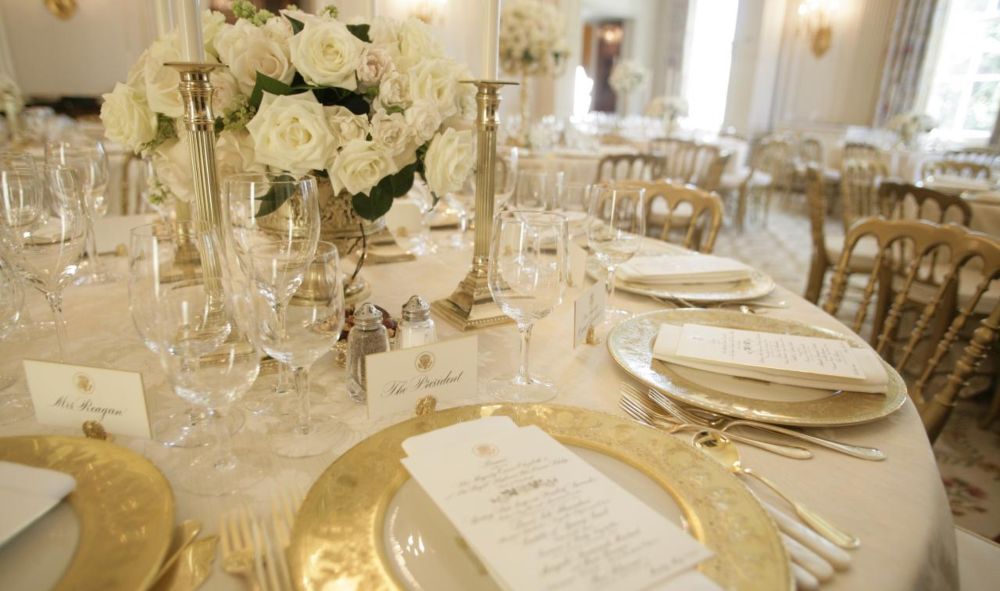 When it comes to pomp and circumstance, the United States, for all our egalitarian palaver knows how to throw a posh soirée that could put a feast at Downton Abbey to shame.

We might possibly be the country that invented brown bag lunches, but we also can set a good table. Consider the plans for the first State Dinner of the Biden Administration.

First Lady Jill Biden announced the details Wednesday in advance of this evening’s dinner. I’m not sure what you are planning to cook tonight, but here’s what is on offer for the visit of President and Mrs. Macron of France.

Describing the menu to reporters, White House Executive Chef Cris Comerford said the main dish was in honor of “our lobstermen from Maine who really have to like work pretty hard because they had to ship 200 live lobsters to us.”

Speaking of the amount of prep these dinners require, Executive Pastry Chef Susie Morrison noted that the 1,200 red, white and blue spirals on the dessert are made of sugar, 400 in each color.

The Bidens, Macrons and lucky guests will enjoy this feast in a candlelit glass pavilion on the South Lawn of the White House. Dr. Biden told reporters that the dinner aimed at highlighting the common values of France and the United States: «liberty and democracy, equality and fellowship. »

For a State Dinner, every detail counts. As a reporter, I covered several during different administrations and remember the special touches like a dessert crafted to look like miniature Big Bens in honor of Tony Blair and performances after dinner by Elton John and Stevie Wonder. When Czech Republic President Vaclav Havel let it be known he was a longtime fan of “Velvet Underground,” the Clintons arranged for Lou Reed to perform at the State Dinner for Havel in 1998.

The special details for the Macrons, as described by the First Lady, include flowers red, blue and white like the flags of both nations: “vivid red roses and blue delphiniums, alongside white irises—which are the symbols of our nation’s capital and of France—their intricate petals reflecting the interwoven history of our nations.”

For the after-dinner entertainment, she said they chose Jon Batiste, a performer who grew up in New Orleans, which has been shaped by both French and American culture.

In her prepared remarks, Dr. Biden touched on why each detail of the evening was important. “My mother made every dinner a special occasion. She would bring out the china, put fresh flowers on the table, and light candles. Even if we were only having fish sticks from the freezer, she always made our dinners feel special.

“I learned that setting a table can be an act of love—and once I had my own family, I did my best to keep that tradition alive.

“Our first State Dinner … will be no different. It’s an expression of welcome and friendship—a way to connect through a language that transcends words. And as each dish comes to the table, so too does the meaning behind it.”

Breaking bread together, or cracking open lobster claws, does bring people together in ways that other forums can’t replicate. But as many people experience over their holiday feasts, finding common ground politically or diplomatically these days may take more than a shared slice of orange chiffon cake prepared by the White House pastry team of White House or a slice of your grandma’s pumpkin pie.

(Of course, another big difference between those of us hosting festive dinners at home and the Bidens —or the Crawley family of Downton Abbey— is that we have to do the cleaning up ourselves.)

Linda Kramer Jenning
Linda Kramer Jenning is an independent journalist who moved to Bainbridge Island after several decades reporting from Washington, D.C. She taught journalism at Georgetown University and is former Washington editor of Glamour.
Previous article
UK Government Slashes Arts Funding in London, Boosts it in the Provinces in Mistaken Notion of Parity
Next article
There’s Blue in Them There Provinces