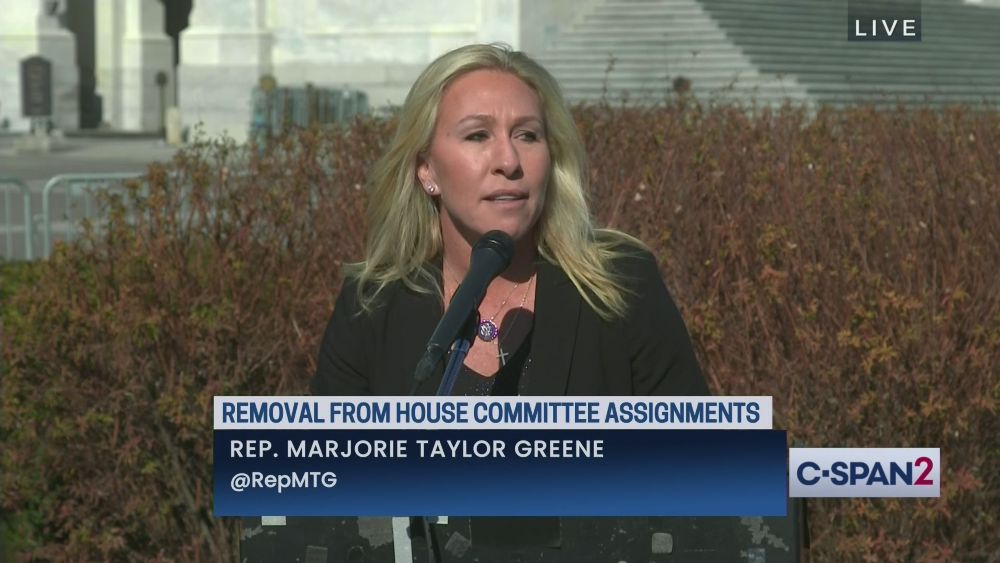 Republican House Leader Kevin McCarthy is bargaining his way into becoming the next Speaker of the House. He is promising prominent leaders of the Freedom Caucus that they can have seats in the next Congress’s most powerful committees. However, only if they could deliver enough of their reactionary comrades to vote for McCarthy. He needs to receive 218 to win that position. McCarthy wants to avoid 2015 when the Freedom Caucus derailed his last leadership bid.

If the Republicans end up with 222 seats in the House, the Freedom Caucus will comprise only 20 percent of its membership. Best estimates are based on self-declarations; since membership is not published, the caucus has 44 members. It’s most likely that the 31 Republicans who voted in their private conference against McCarthy as the new House Speaker meeting were from the Freedom Caucus. The challenge to McCarthy was led by Freedom Caucus members, and afterward several would still not support him.

The Freedom Caucus has a track record of deep-sixing any Republican Speaker who presents a problem for them. Two prior Republican speakers, John Boehner and Paul Ryan, were pushed out as Speakers by the Freedom Caucus. Ryan failed to get a critical Republican bill replacing Obama’s Affordable Care Act due mainly to the caucus’s opposition. In a Vanity Fair interview, Boehner described the caucus as “anarchists. They want total chaos. Tear it all down and start over.”

McCarthy is dependent, as is any House Republican, on receiving almost all the Freedom Caucus members’ votes when the full House votes on selecting a new House Speaker on January 3. Since all Democrats and Republicans in the House vote for the next Speaker. It is conceivable that the Democrats could put up a candidate who might attract some crossover Republican support. But who?

That scenario has Rep. Marjorie Taylor Greene (R-Ga.) supporting McCarthy as House speaker. She criticizes other right-wing Republicans opposing McCarthy as having a “bad strategy” that could lead the Ds to push Liz Cheney as the next Speaker. This scenario sounds far-fetched, given that Cheney would not be in Congress next year. However, the Constitution does not require the Speaker to be an incumbent member of the House of Representatives.

Rep. Green is critical to McCarthy because she has an outsized influence among House Republicans. In addition, she is a media star voicing the most radical conspiracy theories, beginning with the big lie that Trump won the 2020 election. And she brought in nearly $10 million in contributions to the Republican Conference, making her one of their top fundraisers.

Green was stripped of her committee assignments after some of her old comments advocating political violence surfaced. She got her revenge on the entire House membership by objecting to voice votes, typically done instantly on dozens of uncontroversial bills – if no member objects. Sitting on the House floor, Green objected to every bill proposed for a voice vote, forcing all 435 House members to show up for a recorded vote.

She explained to Molly Ball of Time magazine, “Everyone had to stop what they’re doing, and it slowed everything down.” By her count, she and her allies forced more than 500 recorded votes. It was clear that unless McCarthy had her support, she could hold up any legislation that McCarthy wished to move by calling for a voice vote.

As a result, McCarthy has indicated that Green is likely to be rewarded with a position on the House Oversight Committee. This committee can inspect, examine, review, and check the executive branch and all its agencies’ programs and policy implementations. She clearly intends to use this committee’s powers to focus on investigating and exposing Democratic malfeasance rather than, as she says, passing partisan bills that will never become law.

The other critical supporter for McCarthy to get Freedom Caucus members’ votes is Jim Jordan, its 2015 founding chairman. Trump described him in 2018 as an “absolute warrior” for defending him during his investigation by the Special Counsel. Ironically, another such warrior he mentioned was Ron DeSantis while he served in Congress.

Jordan spokesperson Russell Dye says that Jordan is looking forward to chairing the Judiciary Committee. Jordan is well prepared to use the Republican-controlled committee to begin a sweeping investigation of Attorney General Merrick Garland, FBI Director Christopher Wray, and the Department of Justice. Jordan said pointedly that he already knows that the DOJ is being political since they are trying to determine if former President Donald Trump is guilty of anything.

Jordan produced a report (HJC staff – FBI – Report) questioning the Justice Department’s investigations of Trump’s 2016 campaign, the current probe into documents found at Mar-a-Lago, and a plot to exaggerate the threat of domestic terrorism. As chair of the Judiciary Committee, he could promote his report to the media to dominate the evening news cycle.

Jordan says there are whistleblowers who claim that FBI employees were pressured to reclassify crimes as domestic terrorism, presumably to exaggerate domestic danger coming from the far right. However, it’s unclear whether any of these employees filed whistleblower reports. The report is just over a thousand-page document, with 95 percent of it consisting of old letters Republicans already sent to the Biden administration, according to Steve Benen of MSNBC.

Nevertheless, expect the Freedom Caucus members on various committees to produce similar reports to justify investigating Democratic behavior. In particular, they are pressuring McCarthy for more of their members on the Rules Committee, which determines how legislation is introduced in the chamber.

The caucus has given McCarthy his marching orders, and he appears to be in step with them. In retaliation for Green and Paul Gosar being removed from their committee posts for invoking political violence (which was taken by a bi-partisan vote), McCarthy will remove Democrats Eric Swalwell and Adam Schiff from the House Intelligence Committee. In addition, he will remove Ilhan Omar from the Foreign Affairs Committee, accusing her of making antisemitic comments in the past by her criticizing Israel for its “atrocities” in the occupied Palestinian territories,

With McCarthy adopting the Freedom Caucus agenda, he doesn’t leave much room for passing any important legislation out of the House, including the federal budget. Failing to do so would shut down the federal government. The last time the Republican Party took that path, they lost far more seats than the Democrats in the following cycle of congressional elections.

The first thing to understand is that each party has multiple ideological caucuses. The largest of all is Republican Study Committee. With 158 members, it dominates the other three Republican caucuses in size and power. The second, third, and fourth largest House caucuses are all in the Democratic Party: Labor Caucus with 114 members, the Congressional Progressive Caucus with 99 members, and New Democrat Coalition with 97 members. The Republican Freedom Caucus with 44 members is the furthest right, and the Congressional Progressive Caucus is the furthest left within each party. But the Freedom Caucus wields more influence than any other caucus of either party.

From my readings, one apparent characteristic sets the caucus apart from others. While all caucuses publish and promote policies, unlike the others, the Freedom Caucus uses disciplined block voting. Once 80 percent of their membership agrees on how to vote on a piece of legislation, each member is obligated to vote that way.

Another distinguishing feature is that they do not publish their membership list. Membership is by invitation only, and meetings are not public. The chair is publicly acknowledged, and any member is free to disclose if they are a member. However, there could be members who are not identified as members voting on legislation or motions without the opposition knowing how they are obligated to vote. This practice provides a tremendous advantage in outflanking the opposition.

Another characteristic of the Freedom Caucus is their open criticism, if not hostility, to the Republican Party establishment. Within the caucus, a small subgroup, dubbed the MAGA Squad, is dedicated to Donald Trump. Washington Post detailed their efforts supporting primary challenges against incumbent Republicans during the 2022 United States House of Representatives elections.

The Freedom Caucus also financially contributes to the most reactionary candidates for open seats, often competing against other Republicans supported by the larger Republican Study Committee. There is no equivalent subgroup in the Democrats’ Congressional Progressive Caucus, and that caucus as a single body did not run candidates challenging Democratic incumbents.

The Freedom Caucus also has financial muscle by funding Republican candidates through its PAC, the House Freedom Fund. They choose candidates that are election deniers and hardcore Trump supporters. The Democrat Progressive Caucus also has a PAC, but it made miniscule contributions in the 2022 elections compared to the Freedom Caucus’ PAC. Open Secrets reports the House Freedom Fund distributed $11 million among the 17 candidates it endorsed. Meanwhile, the Congressional Progressive Caucus PAC contributed under a quarter of a million among its ten endorsed candidates.

Through a combination of intimidation and brute politics in challenging Republican leaders like McCarthy, the Freedom Caucus will be dominating the headlines and the agenda of the House of Representatives. McCarthy will only be able to keep his post as Speaker of the House if the most reactionary Republicans allow him to remain as Speaker. At some point, the other House Republicans may challenge the caucus to halt their party’s continual support of unsubstantiated conspiracies. However, they do not appear up to that challenge.

For instance, Fox News anchor Chris Wallace asked Rep. Jim Banks, chairman of the Republican Study Committee, if he believed it was a “lie” that the 2020 election was stolen.
This is a fair question since Banks had joined a Texas lawsuit challenging Biden’s electoral victory in several states and objecting to Congress’ certification of Biden’s election win.

Although Banks did say that “Joe Biden was elected, he was inaugurated on January 20.” He followed up that question with concern about “how the election in November was carried out.” But, more importantly, he added, “That is where most Republicans in the GOP conference are unified around that single mission and goal” He and other leaders do not want to be distracted from that objective.

Banks’ statement represents what most House Republicans believe. They cannot accept that Joe Biden won a fair election. He may have won, but something went wrong. For them, it was not the number of votes counted but how they were counted. In taking that stance, they capitulate to the Freedom Caucus, promoting the Big Lie that the election was stolen. Perhaps they fear being outflanked on the right by the caucus and losing core supporters who accept the Big Lie. But it also weakens the Republican Party as a party that adheres to democratic norms and procedures.

Over the next two years, there will be a battle within the Republican Party to determine which agenda to pursue, one of revenge based on unproven conspiracies or passing conservative legislation that is not dependent on conspiracy theories.