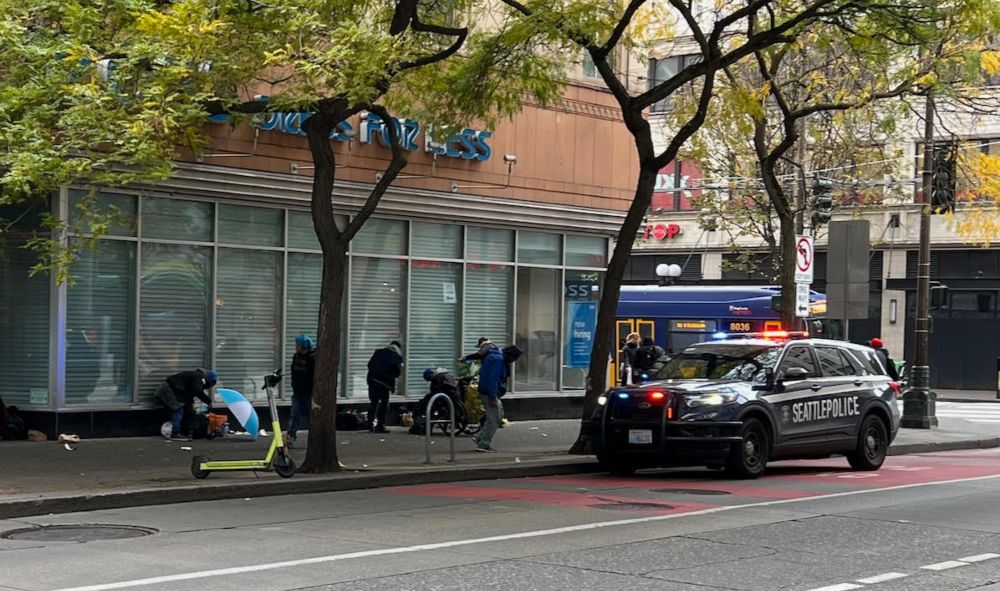 “Not giving in.” That’s what Wild Ginger owner Rick Yoder said even as the street outside his restaurant filled with tents, drug deals, the distorted dances of addicts on fentanyl, and debris thrown against his windows.  Yoder stayed open.

I take that lesson, not to give in (as so far this city has) to the ever-present dealing and addiction visible daily, still, on some corners of our downtown.

In the photos here, taken just before noon as I walked along Pike between 3rd and 4th, I saw the money changing hands, the drugs disbursed, the fentanyl inhaled by at least a dozen users. All of this was out in the open next to the side windows of Ross Dress for Less.

As I crossed the next street, a Seattle Police patrol car pulled up and much of the crowd moved on, but when I crossed back to talk to the officer there were three or four addicts unfolding the foil, inhaling the drug.

The officer was friendly, and candid. He said using fentanyl is a misdemeanor, hardly ever enforced in favor of offering users therapy if they want — something I’ve never seen done.  Selling the drug is a crime, a felony, but this too is seldom enforced because under the law, a seller must be caught in the act at least four times.  Arrests happen now and then, but the officer admitted that given the SPD shortage of officers, not often. (He actually works West Seattle, but was downtown on overtime.)

The officer knows, and admitted it, as I see from almost daily walks, that when his car pulls away, the same cluster will gather again, the same selling and dealing on a central downtown sidewalk will resume.

I did ask what needs to change. His response — it needs to begin with mayoral and city council leadership, with tougher laws and enforcement.  Will that ever come, finally?  The record of these last three to four years doesn’t suggest a positive answer, but let’s at least do our part as citizens.

My advice: Let City Hall know your frustration, not only at the darker image of our city arising from relatively few downtown blocks (ones that get maximum media and chatter attention), but remembering too that addicts made limp or hyperactive by fentanyl are fellow citizens desperately in need of help that doesn’t come.

Recalling Rick Yoder’s motto, we must be better and not give in.