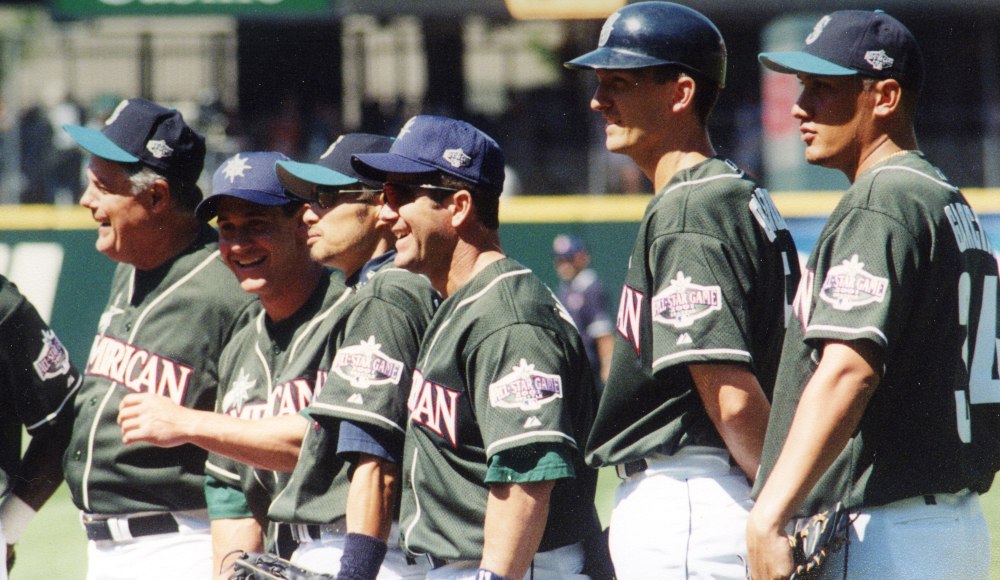 Masterclass in Futility: Looking Back at the Mariners’ Sordid Early Annals of Ennui

For a fuller appreciation of what has overcome Seattle baseball fans this week with oxygen-depleted swoons accompanied by guttural gasps, an understanding of Mariners history is helpful. No, not the streak of 21 consecutive seasons without playoffs, which ended uproariously Friday night at T-Mobile Park. You know about that.

In the modern expansion history of American pro team sports, the Mariners were the slowest to reach break-even. It took the Mariners 14 years to produce a winning season, 83-79, in 1991. Given the MLB business tools to aid early competitiveness such as the reverse draft, free agency and no player-payroll cap on salaries, it is the acme of dubiousness to stay success-resistant so long.

For parts of three decades, the idea of postseason play for the Mariners was . . . well, let’s borrow from former NFL coach Jim Mora: “PLAYOFFS?! Don’t talk about—playoffs? You kidding me? Playoffs!?!”

Anyone in the region under 25, most of the hordes of newcomers, and the veteran fans who tend to drink heavily, have little or no connection with the club’s sordid early annals of ennui. So I offer here a brief glimpse, by way of my 2002 book on the Mariners, Out of Left Field, to enrich the pending weekend appearance in the postseason to its full preposterousness.

The book was written after the Mariners had made four playoff appearances starting in 1995, and had moved into the new stadium, inaugurating it with a 116-win season, an MLB record that still stands.

A one-hopper back to the mound, and it was over. Pitcher Billy Swift made the easy throw to first base for the final out in a 4-3 victory over the Texas Rangers, in a game no one would remember except for the guys hopping up and down on the field in the quiet decrepitude of Arlington Stadium. In the press box, the scramble by radio broadcaster Dave Niehaus to get down to the visitors’ clubhouse was complicated by the tears in his eyes. He didn’t care what anyone thought. After what he witnessed for 15 years, a celebration with his fellow brethren of the lost was in order. So he was a little sloppy. When he arrived at party central, champagne bottles were making the rounds. Alvin Davis the slugging first baseman known as Mr. Mariner for his years of franchise service as noble as they were futile, ran over to deliver a bear hug to Rick Griffin, lifting the skinny trainer off the floor.

“We’re not losers anymore,” Davis yelled to his pal, relief as much as joy in his voice. The 81st win of 1991 assured the first non-losing season in club history – the first time they would not lose more than they won. Didn’t matter that it wasn’t yet a winning season in a 162-game schedule. The season just wouldn’t be a loser. The worst expansion team in American sports history had reached an elusive milestone of mediocrity. For the long-abused, it was exhilaration times ecstasy.

This was huge,” said the manager, Jim Lefebvre. “It’s a huge weight off the backs of the players, the coaches, the front office, the city and everyone who has anything to do with baseball in Seattle.”

Niehaus also could not resist the pull of oral hyperventilation.

“It was almost like we had won the World Series,” said Niehaus, who began with the club from its litigious birth in 1977 to become its most familiar and beloved figure. “I was so emotional, and so was Jimmy. For all those guys who had been there for all those years – Alvin Davis, Dave Valle, Harold Reynolds – it was just a huge, huge burden off our backs.

For some stupid reason, we could never reach .500. Year after year after year, it was unreachable. But in baseball, it’s very reachable.”

That’s what Jay Buhner thought. A Mariners short-timer, less than three years removed from the sport’s winningest franchise, the New York Yankees, the right fielder watched the little celebration and shook his head. He walked away, silently, into the training room.

“A celebration of .500,” he said, embarrassed over the salute to tepidness. “I couldn’t believe it.”

Arriving via trade halfway through the 1988 season, he lacked an appreciation for the number of upturned rakes upon which the franchise had stepped. If there was a banana peel, or an open manhole cover, anywhere in the neighborhood, the Mariners were on it and in it. From the 1977 startup through 1992, the franchise was arguably the most consistently misbegotten enterprise in American pro sports. For what seemed like forever for Niehaus and the small knot of fellow masochistic foolhardies who followed the Mariners, it was always two outs and nobody on base.

For those who knew the M’s then, the franchise’s subsequent achievements are so ungraspable that fans must perform a pinch upon entry to the club’s 21st century home of Safeco Field and ask: Is this a dream?

Apparently, it was, because the subsequent decades have been a gray reality of low murmurs and high futility.

So this week is rare – the fifth postseason appearance in 45 years. For perspective, in the 21 consecutive years Seattle was absent from the playoffs, the raggedy-ass Oakland A’s, MLB’s sickest franchise, made it nine times.

Fourteen years to .500, 21 years between playoffs. If you are a non-baseball fan, look upon your overwrought Mariners-loving friends and family with compassion. The road has been harder than even they realize.

Art Thiel
Art Thiel is a longtime sports columnist in Seattle, for many years at the Seattle Post-Intelligencer, and now as founding editor at SportsPressNW.com.
Previous article
Kissinger & Friends: What Defines Leadership
Next article
Is Brazil Really Done with Balsonaro? Previous President Lula Makes a Comeback