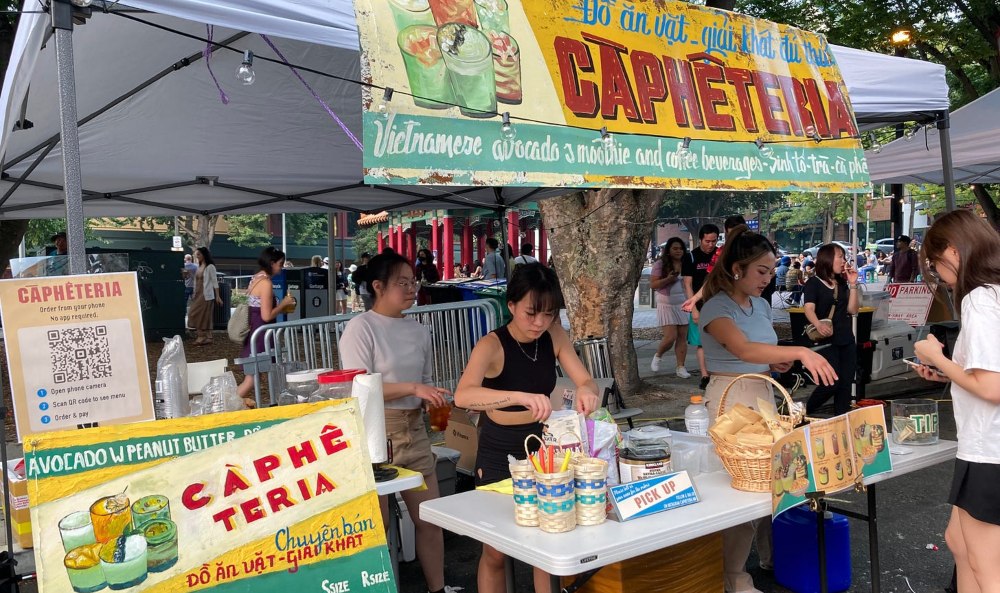 The Vietnamese Entrepreneurs Behind the International District Night Market

Pandan waffles, grilled lobster tails and fried calamari, pork belly buns, ice cream macaron sandwiches, fish-sauce flavored corn nuts, and freshly pressed sugar cane juice with bits of kumquat jam. These were all offerings at the Chinatown-International District Night Market in Seattle on Sept. 10. Behind each tasty treat (and I tried them all) are Vietnamese-born entrepreneurs.

I love chatting with entrepreneurs, especially when they’re Vietnamese like me. Unlike the other food vendors at the festival, who were scattered among public service and knick-knacks booths, these six stalls formed a flank as if to declare “we Vietnamese got each other’s backs.” I asked some of them to share their stories.

Bao Nguyen and Dr. Hanh Hoang of Phin first sold their pandan waffles at the C-ID Night Market in 2019 and drew a long line of customers. They grew up waiting in the long lines for the pandan waffles at the Co Lam Temple during Lunar New Year. Even though he’s trained as a community organizer, Bao realized he wanted to create a positive impact through his own business, starting with how his employees are treated. He pointed to Torrey Le, the owner of Crawfish King in Seattle, in the next stall, as someone who provided invaluable advice when he was starting out. Torrey bought his restaurant in 2015, after having been the manager at Crawfish King for two years and he just acquired Gourmet Noodle Bowl, a Taiwanese restaurant next door, which also had a booth at the Night Market. Both Bao and Torrey talked about their gratitude for their teams.

Stephanie Tran just started a snack bar called “Cáphêteria” three months ago. Even though she is from Hanoi, she loves snacks from the Saigon of the 1970s. She hopes this pop-up will become a storefront and she’s looking for a location now. Then there is Nikki Pham, who grew up in Saigon and came to Seattle four years ago to study. She started making the pressed sugarcane juice because she misses her mother’s kumquat jam. For now, “Sweet Summer” has no plans to start a store, and they don’t even have a website yet. I didn’t get to talk to Michael Nguyen, the owner of Macadon, because he was busy with their brand new storefront in Renton. I’ve been buying Asian flavor inspired macaron ice cream sandwiches at street festivals for years.

Being an entrepreneur in the food industry takes a whole different level of risk taking — perishable goods, finicky customers, health regulations, labor shortages, and years of investment before achieving profitability. It takes guts.

I grew up witnessing this kind of courage every day. As the founders of the longest-running Vietnamese newspaper in Seattle, my parents are also entrepreneurs. They are hustlers who serve hustlers, the phở shops, the nail salons, the bánh mì makers. I became a hustler myself when I started my own company last year, even though my work in leadership development and team building is far from the kitchen.

After making a small profit in my first year of business, I’m definitely in “investment” mode in my second year, which is a euphemism for expenses outpacing revenue, as I pay others to help me develop our core offerings.  Whenever I have to tap into my personal savings to make payroll in any given month, I think about my parents who came as refugees, with me, a two-month-old baby, and about their resilience and persistence. Despite weathering numerous storms, the newspaper eventually put me and my two brothers through college. Just as this group of food vendors support one another, I’ve reached out to other consultants for referrals and supported them with introductions to potential clients. Regardless of the kind of work you do, we all need to belong to a support system.

Running a business has a lot of ups and downs.

I came to the Night Market for a break, for some fun and food with friends. I left energized, inspired, and reminded that I belong to a community of hustlers who are resolute in making our dreams a reality.

This essay was originally posted in Julie Pham’s Substack.