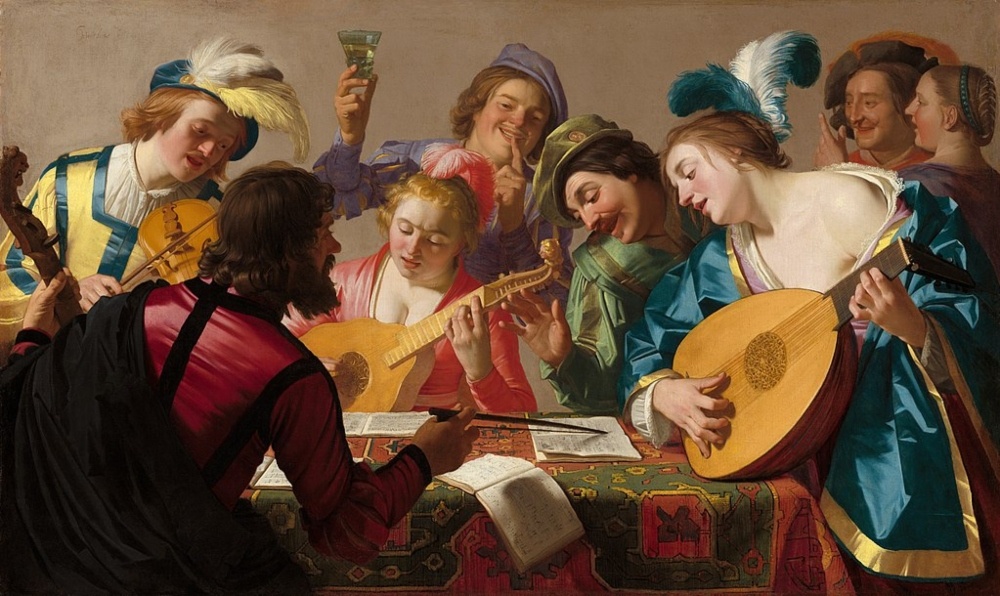 One of Seattle’s notable artistic distinctions has been to become one of the few non-European cities with a thriving Early Music scene, matching Boston, Berkeley, Montreal, and latecomer New York City. (Portland, Vancouver, Toronto, and Chicago are catching up fast.)

Early Music refers to classical music before 1750, when Bach died. It used to be scorned by mainstream players and conductors, who dismissed the wiry, swelling notes from period instruments and other mannered, academic affectations of the “authentic performance”  movement. Now, its brisker tempos and cleaner textures are absorbed into the mainstream. Even lordly Juilliard finally has an historical performance program.

Seattle had a core of amateur recorder players, harpsichordists, and others who formed the Early Music Guild in 1977 and started presenting some of the top European ensembles. Eventually the Guild helped incubate the Seattle Baroque Orchestra, founded in 1994 by violinist Ingrid Matthews and harpsichordist Byron Schenkman, and now led by the distinguished Canadian conductor/harpsichordist Alexander Weimann. SBO is now “a pocket orchestra” under the umbrella group Early Music Seattle (EMS), which has a combined annual budget of about $500,000.

Other choral and instrumental groups have been born here. The lutenist Stephen Stubbs returned from Germany to his hometown Seattle in 2006 and created another inventive and excellent group, Pacific Music Works. Originally, the University of Washington School of Music trained many of these musicians such as Stubbs, but the UW has not provided much support in the past 30 years. So early music has been a home-grown art form, enriched by many fine musicians (including the late medievalist Margriet Tindemans, who moved here from Holland), to play, form ensembles, and use Seattle as a base for international touring.

Not content with this niche, Early Music Seattle is now embarking on some significant changes. It has a largely (eight of 10) new board, many drawn from the tech world. It is searching for a new executive director, as the ED since 2000, lutenist Gus Denhard, moves to the role of artistic director. And, catching the current trend of broadening audiences and non-European cultural traditions, EMS is adding world music to its repertoire.

The shift began about a year ago when the new (on the board just three years) board president, Dublin-born Aly Gardner-Shelby, sat down with Denhard and asked him to draw up his “ideal day.” That ideal day was full of music-making and artistic collaborations – not, after 22 years at the helm, the nuts and bolts of management. So a deal was struck to have Denhard focus on artistic matters 30 hours a week (from 40), leaving more time for performing and teaching. As Denhard proposed, the board would seek a new executive director, funded in part by the salary of departed development director Betsy Brick. The new ED would concentrate, as Denhard says, “on audience engagement and experience, revenue growth, and financial sustainability.”

Meanwhile, much of the EMS board, which used to be mostly music lovers and amateur players, has left, some owing to business pressures during the pandemic. Half of the new 10-person board comes from the technology world, and others are strong in motivational consulting. Requirements for the new executive director include a “passion for music” but not music or arts-management experience.

Denhard insists “no major changes are planned for our overall artistic direction,” which is understandable since EMS and SBO have developed a loyal audience from years of programming (notably at Town Hall, which the Guild helped to create). But Denhard and President Gardner-Shelby have in mind a passel of new initiatives and experiments: taking more programs out to the community, forming musical partnerships with non-white musicians, more crossover programming such as the rich tradition in Mexico of Spanish Baroque music. Gardner-Shelby talks less about music in a grand hall and more about emulating “a traveling circus” and getting out to “where the people are.”

Giving more opportunities to play is essential if Seattle is to continue to attract resident musicians. Retaining early musicians is challenging when SBO only plays a handful of concerts a year, too few to create a real ensemble and to pay musicians in an expensive city. On the positive side is the newly appointed SBO concertmaster, Rachell Ellen Wong, a stellar recent graduate of the Historical Performance Department at the Juilliard School. Wong grew up in Lynnwood, which is now her base for many touring opportunities. SBO is also embarked on a re-imagining voyage, including collaborations with dance groups and singers.

Some of these diversity and inclusion programs may be a stretch for a type of music deeply rooted in older European culture. Some might suspect these new clothes are meant merely to woo potential funders seeking to promote diversity, equity, and inclusion.

But both the leaders of EMS are fully devoted to this kind of multicultural broadening. Denhard greatly enjoys playing, Silk Road-style, with Asian and Mideastern musicians, learning from them and stretching his techniques. He speaks glowingly about Mexican ensembles, rooted in classical traditions while also fully alive to popular folk music. The new board president, newly retired from Microsoft, where she was active in DEI work, is also a driver of these kinds of outreach and experimentation. “I’m Irish,” she explains.

Finally, this kind of change is taking place for many arts groups in Seattle hit by the pandemic, diminished audiences, and rising costs. Thus pressed, arts boards are changing. Exhibit A is ACT Theatre, where the whole board agreed to resign. Soul-searching is now a feature of boards and staff and artists and diversity consultants, addressing the too-White mentality and leadership and audiences of the high arts by reaching out to non-traditional audiences and new partnerships.

Even for Early Music Seattle, as with other similar ensembles around the world, “historic performance” now has a much wider scope.

David Brewster
David Brewster, a founding member of Post Alley, has a long career in publishing, having founded Seattle Weekly, Sasquatch Books, and Crosscut.com. His civic ventures have been Town Hall Seattle and FolioSeattle.
Previous article
What Does It Mean to Call Someone a Fascist?
Next article
Wild Mushroom Season: How to Cook Chanterelles