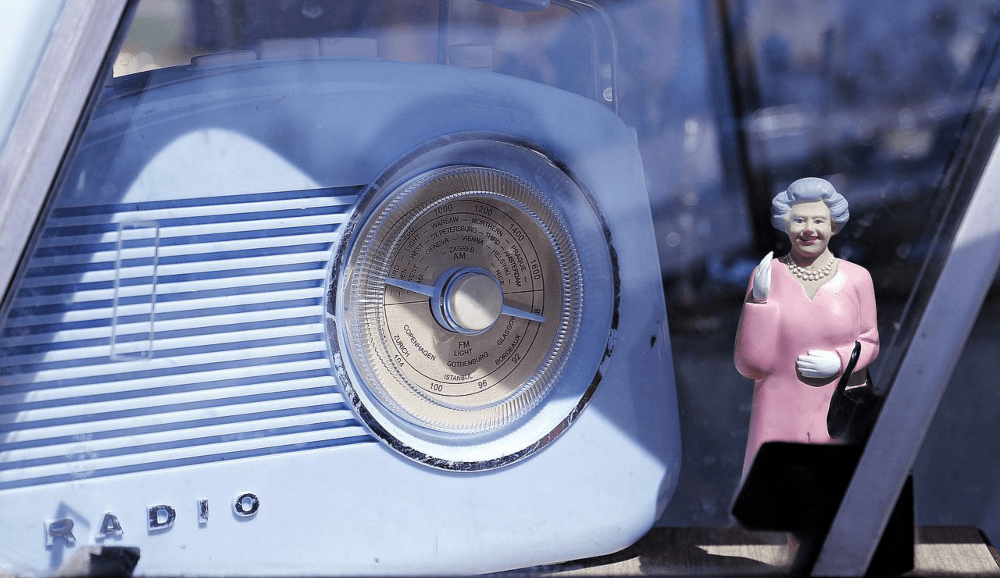 The first time I ever watched television was on a rainy June day in 1953. I was sitting in the converted chicken coop housing of our nearest neighbors in a deep woods. The residents were a commercial fisherman, his alcoholic wife, and their two stolid children.  My family lived on a rutted dirt road in cut-over Snohomish County, a swamp below us, a swamp above us. On the small screen in grainy black and white I watched a stately pageant at Westminster Abbey.

About a week later my mother, older sister, and I took our monthly trip to Everett, a smoking mill town.  When the allotment check arrived from my father (in the Mediterranean with the 7th Fleet), my mother took us to a western at the Roxie theater, lunch at Woolworth’s counter, and dinner in the Imperial Temple on Hewitt Avenue.  In Woolworth’s basement, I was permitted to buy a red plastic model kit of the Coronation Coach to take home, assemble and paint gold.  The store featured souvenirs of Elizabeth II’s coronation: China cups and plates bearing images of the young queen and her husband in full regalia. In Everett!

The sumptuous royal exoticism on display in gray Washington cities and its muddy, logged hinterlands explains my becoming a budding Anglophile.  In 1949 my family had moved from sunny Pleasanton, CA, to dark, damp Snohomish County. Our new home was a ragged plot my father purchased after reading “Five Acres and Independence.” We embarked on an iron-age lifestyle.

My mother’s people came from the dark underbelly of Central Europe, literally from the “Mud People,” descendants of Moravia.  My father, whom I would not meet for years, spoke German.  Among post-war school children forced to deal with returning veteran fathers, that was about as bad as it could get, so we grew up amid stark prejudice.  Years later I discovered that Dad actually spoke Altdeutsch, high German, and that his brood of anabaptist malcontents had been driven out of Switzerland by Calvinists in the 1700s.

In this dark and threatening world the Royal Family glittered.  Elizabeth was beautiful in her dark, Windsorly way: slim, buxom, decked out in silks, ermine robes, and blinding diamonds.  With stunning Prince Phillip and tailored children, what was not to like?  Far grander than Ike and Mamie Eisenhower or Richard and Pat Nixon.

With puberty I developed a crush on young Princess Ann.  I still get all misty-eyed remembering when, as a young woman waylaid by a would-be kidnaper, she disarmed him and held him prisoner at the point of her pistol until the Bobbies showed up.  No-nonsense and plucky that one, unlike her brother Charles.

So I grew up loving bagpipes, trooping the colors, tattoos and such eccentric items as star-gazey pie, a Cornish pastry with fish heads poking up through slits in the crust.  Channel 9 used to broadcast Scottish dancing lessons, complete with crossed sabers. At the U.W. students crammed the halls to hear Giovanni Costigan lecture on The Makers of Modern England.

All the while, Elizabeth reigned over her subjects with serene, elegant grace.  Churchill adored her.  She knighted Edmund Hillary, conqueror of Mt. Everest, Francis Chichester for sailing solo around the world, and (with the same aplomb) even John Profumo for his long and quiet charitable work after a lurid political scandal.

The second Elizabethan Age happened in straitened times.  Coronation filmmakers were careful to avoid shots of London still in ruins from the Blitz.  Wartime food rationing continued until 1956.  Economically exhausted, the empire was already on the wane: Indian, Pakistan, Burma, and Ceylon were going independent, and the Mau Mau Rebellion signaled the demise of African colonies.  The trade-offs were the National Public Health Service, Council Housing, and a highway system with round-abouts.

Despite the blunderings of her governments and the tawdry silliness of family members and British tabloids, Elizabeth’s UK muddled on, producing greats like philosopher Bertrand Russell and chemist Rosalind Franklin who gave Watson and Crick the model for the DNA molecule.  The kingdom continued producing its outsized share of Nobel Laureates and enriching the English language with writers. And let us not forget 1066 And All That, Punch, “Upstairs/Downstairs” and the Beatles.

As Queen Elizabeth grew older, Great Britain’s status shrank, and the United States, China, Japan, and India became superpowers.  Somehow the Queen never lost the loyalty and affection of the majority of her subjects at home and abroad.  Jubilees drew huge crowds and the Royal household itself became a major tourist attraction generating earnings greater than the sums Parliament voted for its upkeep.  Great Britain resolutely maintained an Imperial-style monarchy, but Elizabeth herself said that if asked to leave, they would go quietly.

Her quick death came as a shock.  She has been Queen almost all my life, living to a merry 96.  Her reign’s length in years is surpassed only by Louis XIV of France (72 years) and Pharaoh Pepi II of the Old Kingdom (90+ years). Elizabeth Regina became a testament to decency, disciplined, temperate living, and homeopathy.