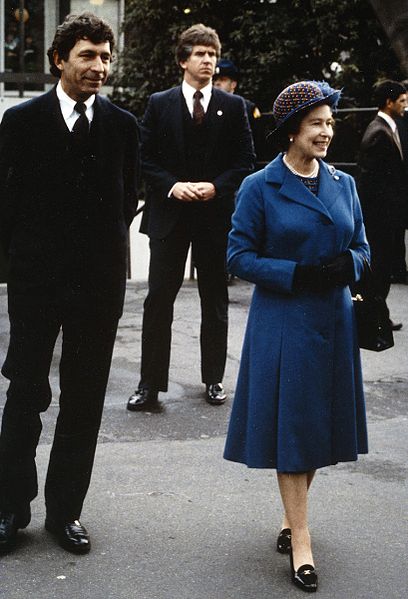 When Queen Elizabeth came to Seattle

Queen Elizabeth II paid Seattle a visit on March 7, 1983. Escorted by then-Mayor Charles Royer, the Queen walked down Fifth Avenue and then met with Gov. John Spellman and invited guests for lunch at the Westin Hotel.

Like many other admiring Seattleites, I was there. I wasn’t up close, not like beaming spectators who stood behind a portable railing underneath the Monorail. Instead I was seated at a window table in a second-floor restaurant overlooking what later would be the site of the Westlake Center development.

Our view table had been booked days in advance by Pam Leven, who was a big fan of the Royals and who had heard about the possible opportunity to see the Queen. Pam was a reporter on the business staff of the Seattle Post-Intelligencer. At the time, I was serving my 18 months as the P-I’s business editor, happy to be working with some talented young reporters — Bruce Ramsey, Pam Leven, and Bruce Sherman.

Pam and I walked from the P-I’s Sixth and Wall Building. We reached the restaurant only a short time before the crowds began gathering on the street below. We were almost too excited to order, thrilled at the prospect of an unobstructed view looking down on royalty. It was only a short time before the Queen’s entourage began strolling by. There were several dozen in the procession: The women dressed in rainwear, the men mostly braving the elements in business suits. There were a few police monitoring the portable barrier, but not much in the way of obvious “security.”

Almost out of the blue, wearing a fitted navy-blue coat, came Queen Elizabeth II walking side-by-side with Mayor Charlie: Royalty with a Royer. The queen was wearing a close-fitting clouche hat with a crown patterned in a red-white-and-blue pattern. You could see that she was wearing pearls, visible above a dress in that same red-white-and-blue pattern. She was smiling broadly and seemed not the least ill at ease.

While it was a typical March overcast day, it wasn’t raining during her walk along Fifth Avenue. Later it would spit rain when she met the governor outside the Westin Hotel. By then, she was carrying her own furled umbrella, whereas Spellman was shielded by an umbrella-wielding aide.

The sighting was something special for Seattle in the 1980s – pre-Microsoft, Amazon and Starbucks – which was seldom a must-stop destination for dignitaries. Queen Elizabeth’s visit was something those of us who watched won’t ever forget. I now recall that royal glimpse with sadness upon her passing.

Jean Godden
Jean Godden wrote columns first for the Seattle Post-Intelligencer and late for the Seattle Times. In 2002, she quit to run for City Council where she served for 12 years. Since then she published a book of city stories titled “Citizen Jean.” She is now co-host of The Bridge aired on community station KMGP at 101.1 FM. You can email tips and comments to Jean at jgodden@blarg.net.
Previous article
The Seahawks Game that Broke Wilson and Carroll
Next article
Why Rules Matter