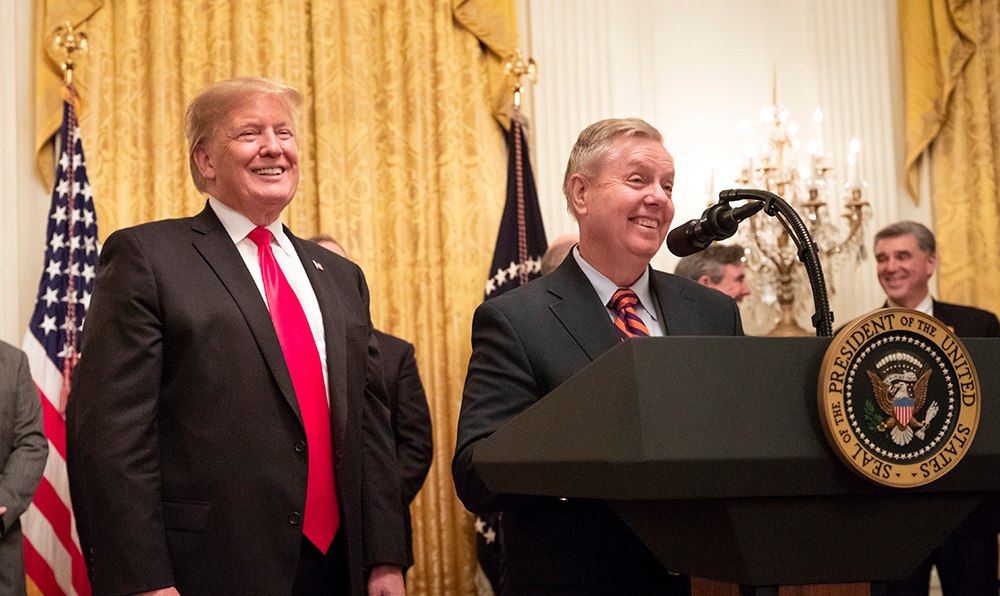 Trump wasn’t even invited to the Cleveland campaign forum: How could he stand up to the “elite” candidates?  Then one by one those candidates dropped out, leaving only Marco Rubio, Ted Cruz, and – incredibly – Donald Trump. Never mind that Trump had accused Cruz of election fraud over the Iowa caucus results, insisting that The Donald was the actual winner.

The Republicans took stock after Trump was nominated at the convention. They figured Hillary Clinton would demolish Trump, leaving the runners-up well-positioned for 2020. At that point, Republican National Chairman Reince Priebus’ entire job had become managing “the joke” that the GOP was playing on itself, months before the voters delivered an unexpected punch line in November.

Worthy chronicler of these origin tales is Mark Leibovich, former New York Times chief national correspondent (now a staff writer for The Atlantic).  In his latest, very funny book, Thank You for Your Servitude, Leibovich surveys the last six years. He starts with the view from the Trump International Hotel, “the flagship payola palace” that operated a few blocks from the White House.

In his book, Leibovich examines the leading players, notably those who earlier had declared Trump unfit but then morphed into sycophants. The author quotes his friend Charles Sykes, who called them “the brigade of dutiful turd-polishers.” What made them do it? Ambition? Opportunism?

Take Lindsey Graham, highlighted in a chapter titled “Stinkball” (Graham’s childhood nickname). Lindsey once condemned Trump as “a jackass” and “race-baiting bigot.” But after Trump was elected, Graham became his best buddy and golfing partner. Leibovich observed the duo heading into dinner one night at Trump’s hotel: “Graham kept eyes fixed on the president like a high school nerd who couldn’t believe that the class bully was letting him hang with him.” Stinkball Graham clung to Trump as a political lifeline in his drive to be relevant and to win a fourth term in the Senate.

Take Minority Leader Kevin McCarthy, who in his post-January 6 floor speech, turned on Trump saying, “The president bears responsibility for the attack on Congress by mob rioters. He should have denounced the mob when he saw what was unfolding.” But days later, Leader McCarthy showed up at Mar-a-Lago to check on, and pay obeisance to, his wounded emperor. McCarthy made the trip (saying he was “in the neighborhood anyway”) despite advice from friends and colleagues who urged him to distance himself from Trump. No way. McCarthy made it clear that he would sacrifice any principle to realize his dream of becoming House speaker.

When interviewed by Leibovich, McCarthy wouldn’t talk about Trump. But he did pass along his favorite January 6 story: After the Capitol chambers were evacuated, McCarthy said he fled to his office with a colleague, Bruce Westerman of Arkansas. Alerted that rioters were breaking in, McCarthy departed. Left behind, the scared Westerman grabbed a Civil War sword from a display on the office wall. He waited out the siege, barricaded in McCarthy’s bathroom, clutching the sword and crouching down on the loo. A fitting portrait for the times.

Throughout Leibovich’s book the questions hang: What made Trump possible? How could Republicans continue to support Trump after so many red lines were crossed, so many guardrails shoved aside and after a madman in a Viking hat assaulted the Capitol? They all knew better, but almost all – in public at least — were buying the Big Lie.

Adam Schiff said, “It happens one day at a time, one small concession at a time. It’s one small lie followed by a demand for a bigger lie and a bigger moral lapse until these folks that I admired and respected had given themselves up so completely to Donald Trump.”

By the middle of 2019 the patterns were set. When Trump took office in 2017, there were 241 Republicans in the House. Since then, 115 retired, resigned, or had been defeated by Trump’s disciples. At that time, one Republican member of the House told the author that “the idea is to make yourself as much of a d—head as possible just to impress the biggest d—head of all, the guy who’s sitting in the White House.”

Leibovich’s chronicle is enthralling. It’s hard to look away. It’s filled with dark humor. I wondered why we have forgotten so many details such as Stormy Daniels’ X-rated revelations. Or the meeting in a chapter titled “Bonfire of the Genuflectors,” when Trump’s Cabinet members took turns praising their boss.

Jean Godden
Jean Godden wrote columns first for the Seattle Post-Intelligencer and late for the Seattle Times. In 2002, she quit to run for City Council where she served for 12 years. Since then she published a book of city stories titled “Citizen Jean.” She is now co-host of The Bridge aired on community station KMGP at 101.1 FM. You can email tips and comments to Jean at jgodden@blarg.net.
Previous article
The Great Midterm Motivator: Abortion
Next article
Putting the Labor Back into Labor Day