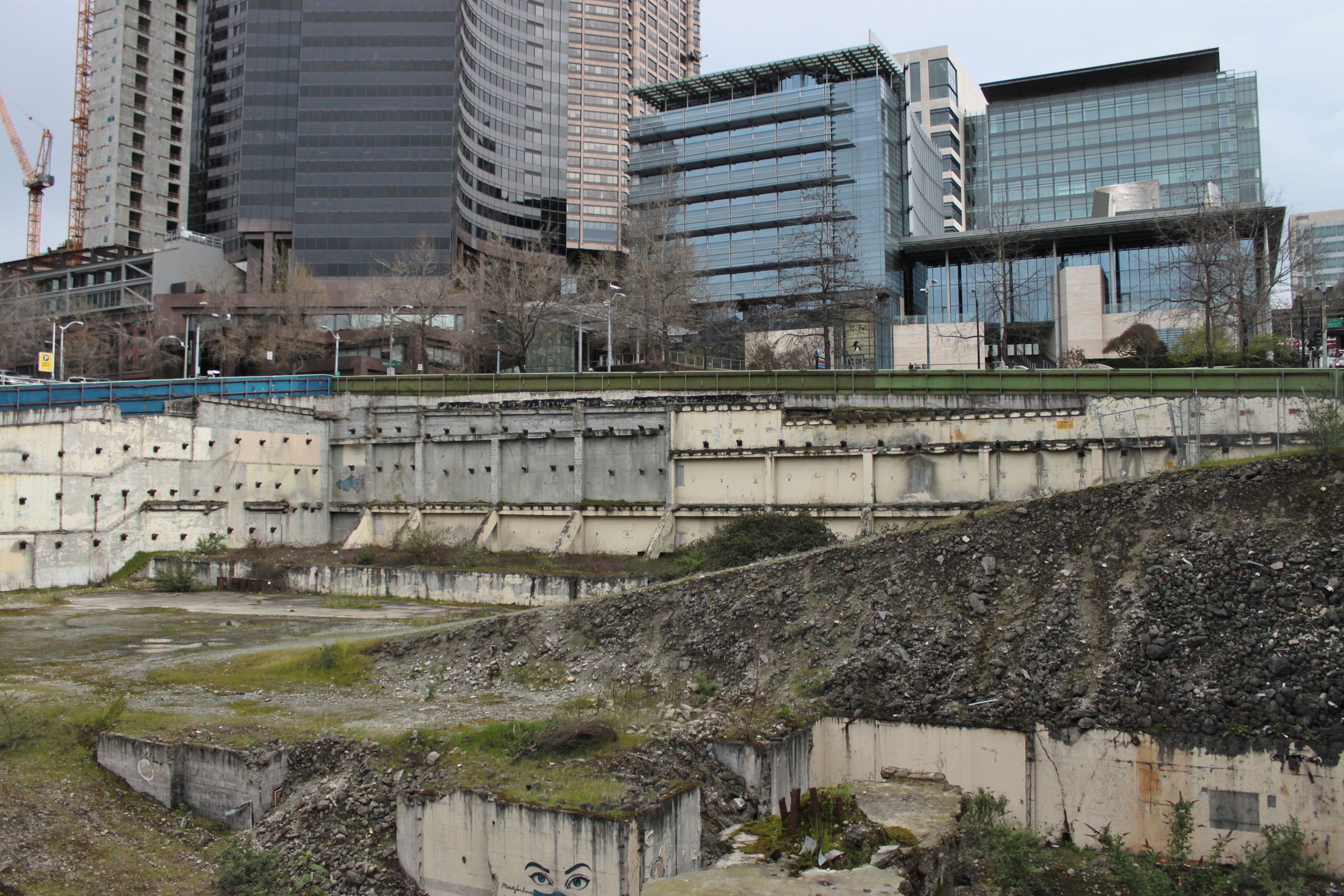 What Could Have Been: Grand Civic Space Languishes as Pit to Nowhere

When I first walked into City Hall as a neophyte councilmember in January 2005, workers had just started demolishing the old Public Safety Building. The building, just to the west of City Hall, was a 14-story teardown notorious for its people-trapping elevators and abandoned rooftop jail. The structure’s sole claim to fame was having served as a backdrop for “McQ,” a neo-noir movie starring John Wayne.

Once debris of the demolished building was carted away, a yawning, block-square pit was left behind. The fenced-off cavity occupied the full block between Third and Fourth and Cherry and James. Seventeen years later that hole in the heart of Seattle still blights the city’s government ghetto (Seattle City Hall, King County Courthouse, Seattle Justice Center, Goat Hill Garage, and County Jail).

During his first term in office, Mayor Greg Nickels had foreseen the emptied block as a grand public-private development, a real Civic Square. The site was to house a 43-story office/residential building, a jointly owned underground garage, and a civic square rimmed with lively retail spaces.

But alas. That utopian vision – the project some called Seattle’s answer to San Francisco’s Union Square – was not to be. No sooner was the project negotiated with Triad Development than the Great Recession hit in 2008. The civic square plan was put on hold while Triad negotiated contract extensions. Then along came the 2015 election and with it an episode that ballooned into a political scandal.

Triad executive Brett Allen had approached Jon Grant, a candidate for Council Position 8, with a deal: If Grant (former Tenants Union president) would help settle the Tenants Union lawsuit against Triad, then a hefty expenditure against his election would go away. It was a naked shakedown and one that wasn’t much of a secret. In fact, Allen also contacted former Mayor Mike McGinn, a Grant supporter, to seek his help in pressuring Jon.

The scandal prompted then Mayor Ed Murray to vow to cut ties with Triad. The development company’s contract with the city was due to expire again on Dec. 31, 2015 and Murray decided it would not be renewed. Attempts were made to transfer the deal to another developer. But the search for partners capable of taking over the project failed not once but twice.

The city was left trying to wriggle out of the deal with Triad as well as finding another developer. Finally Mayor Murray – the third mayor whose office overlooked the giant pit – sent the City Council legislation that would authorize a contract with the Bosa, a British Columbia developer. The council approved the new deal in September, 2017, with only Kshama Sawant voting no and declaring the contract “corporate welfare.”

The new Civic Square agreement differed from the original Triad plan in several respects. Bosa Development was acquiring ownership of the entire block in exchange for $16 million in cash and some $5.7 million expected in affordable housing fees. Bosa had plans to build a taller, skinnier 59-story residential tower with street level retail space and a 25,000-square-foot plaza.

As previously intended, an easement would provide for public use of the plaza. The city no longer would be responsible for the plaza’s operating and maintenance costs but would gain exclusive use of the space up to 10 times a year. Looking ahead, Fred Podesta, the city’s director of Finance and Administrative Services (FAS), talked up the deal: “When the Seahawks win the Superbowl, we’ll have a great place to celebrate.”

Design changes meant that Bosa had to start over and apply for a new master-use permit. That meant a couple of years of delay and pushed back construction once again. Bosa’s new plans were completed just in time for the pandemic to arrive and complicate schedules. The site, once again, stood barren save for a few weedy sprigs and a single tree.

Finally in March of this year there was big news: Bosa announced that it would start on the project the following month. The city issued permits for shoring and excavation and Mayor Bruce Harrell cheered the news. He noted, “It’s an excellent step forward in efforts to revitalize downtown.”

But wait! In July, Bosa put out a release saying the ill-starred project would be delayed yet again. Word from the developer spoke of “rising construction costs” and “uncertainty of the market,” and “looking forward to the time when we can begin pursuing this project again.”

The contract signed with the city had given the developer four years to start on construction and six to finish the tower before incurring penalties from $500 to $5,000 per day. Bosa’s pause of work could mean penalties for delay have been triggered. But FAS spokesman Melissa Mixon stated that “delay damages, if any, will be determined at a later date and assessed after April, 2026 at the earliest.”

At present there are no guarantees that the yawning pit will become the long envisioned public amenity. Over the years there have been a few tantalizing glimpses in local prints. Artists’ sketches show Bosa’s proposed curved tower, designed by architect James Cheng. The graceful structure was depicted filled with hanging greenery and topped with rooftop trees. Will it ever become reality?

It does seem that after an angst-ridden 17-year saga, it is time to talk about rethinking the original dream. The hole in the city’s heart has yawned unoccupied under six mayors (counting interim Mayor Tim Burgess), four potential developers, and just shy of two dozen councilmembers. Children born the year of the Public Safety Building’s last gasp are going to be able to vote next year.

City leaders now need to step back and ask tough questions: Was the original public-private plan somehow flawed? Did it exact too many concessions from the private partner? Is attracting some new developer to take over the project – likely with the risk of a thorny re-negotiation – even possible? Or is Seattle stuck forever with the Pit from Hell?

Jean Godden
Jean Godden wrote columns first for the Seattle Post-Intelligencer and late for the Seattle Times. In 2002, she quit to run for City Council where she served for 12 years. Since then she published a book of city stories titled “Citizen Jean.” She is now co-host of The Bridge aired on community station KMGP at 101.1 FM. You can email tips and comments to Jean at jgodden@blarg.net.
Previous article
Lessons from Hungary: How to Undermine a Democracy
Next article
Warren Magnuson’s Legacy is Instructive: The US Senate in 1970 Versus Now