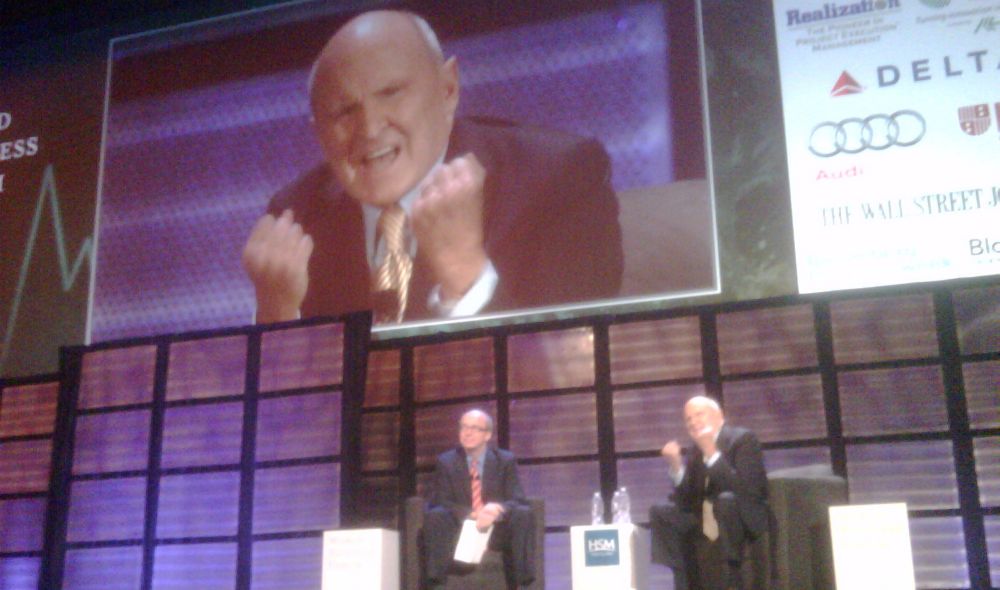 In 1981, the CEO of the most valuable company on Earth invited his successor to his modestly-appointed office at General Electric headquarters in Fairfield, Connecticut. There, this elegant and erudite Englishman named Reginald Jones, who had run the company the previous decade, thought he might impart some final bits of wisdom upon the impetuous Jack Welch.

Like a proud father reluctantly giving away his daughter in marriage, Jones managed to regale Welch with the wonders of General Electric, whose roots extended back to Thomas Edison and became a company that held an unparalleled grip on the U.S. economy. New York Times reporter and Corner Office business columnist David Gelles is the author of a new and highly critical biography The Man Who Broke Capitalism: How Jack Welch Gutted the Heartland and Crushed the Soul of Corporate America―and How to Undo His Legacy (Simon and Schuster, 2022). He does a masterful job of recreating the scene.

“Jack, I give you the Queen Mary,” Jones said. “This is designed not to sink.”

Speedboats, all right. That might have been a synonym for greed, entitlement, and profits before people.

Gelles goes on: “The company Welch wanted to blow up was part of the bedrock of the American economy, the culmination of nearly a century’s worth of innovative engineering breakthroughs and careful financial stewardship. GE’s scientists helped win the world wars, and won Nobel Prizes, too.”

Gelles’ new book is a hardcore muckraking account that portrays Welch as the ultimate boogie man for everything we find reprehensible and ugly about American capitalism. One reviewer faulted the book for tracing too much evil to one man when there are all kinds of sinister structural factors at fault. That reviewer notes that Jeff Bezos is fingered in the Gelles book as the “new Jack Welch.”

When Welch, a 25-year-old whipper-snapper from Salem, Massachusetts, joined the company in 1960, General Electric’s slogan was “Progress Is Our Most Important Product.” Then, a decade later, Reginald Jones introduced the phrase, “We Bring Good Things to Life.” The short-tempered Welch – whose mother taught him poker and insisted he bet his allowance on the game to get a visceral understanding of winning or losing – crushed all of that, like a heavy man stomping on red grapes. For him, making money for the stockholders trumped everything else.

In a number of ways, Gelles notes time and again, he seemed to carry a chip on his shoulder. Writes Gelles: “While caddying at the local golf course as a teenager, a player hit a ball into the water and told Welch to fetch it. Instead, Welch threw the man’s clubs in the water and stormed off.”

Working class hero? No way. The man went on to become a bully, a Trump-like tyrant, really.

Welch took a company that developed America’s first jet engine, among many other inventions brought to market, and was once hailed by Forbes Magazine as “Generous Electric,” for its health benefits, profit sharing, and high employee wages. But under his leadership, from 1981 to 2001, Welch slashed hundreds of thousands of jobs and dramatically weakened unions, all the while, making certain that shareholders and executives grew unfathomably wealthy. Proteges Jim McNerney and Dennis Muilenburg determinedly did the same as Boeing’s CEOs.

Muilenburg, in fact, did so much to move the company’s stock price higher with buy backs and dividends, that not long after he was canned – largely for the callousness he displayed in the dark aftermath of the two Boeing 737 Max crashes, in October 2018 and March 2019 – he still managed an exit package worth $62.2 million.

Welch “pressured underlings to fire more people. When executives were replaced, their jobs were quickly filled with cold-eyed loyalists,” observes Gelles. “Staff at headquarters (in the early years of his regime) shrank by more than half, from 2,100 people to 900.”

“Civility was no longer a corporate virtue,” Bill Lane, Welch’s longtime speechwriter, writes in his memoir. “Spatters of blood began to fleck conference room walls. Horror shows in the field were reported.”

Born in 1935, Welch was the first member of his family to get a college degree, and later a Ph.D. in chemical engineering. In 1968, eight years after joining GE, Welch’s ruthless ambitions paid dividends when he was named head of the company’s plastics division. Welch’s promotion came just a year after the movie The Graduate came out, when “plastics” became the most famous one-word line in modern cinema.

In 1982, a year into Welch’s penny-pinching tutelage, and with a GE factory closing virtually every week, Newsweek gave Welch a name he utterly hated, but would grudgingly agree fit him: “Neutron Jack.” A neutron bomb, you understand, was designed to kill human beings but leave the buildings intact. That was Jack Welch in nutshell, according to Gelles’ harsh and unforgiving portrait. For Welch, like many CEOs today, seemed to live by the credo: Employees be damned; stakeholders need to be enriched.

Gelles conveys in arresting detail, how GE’s CEO went about instituting a system of incessant layoffs that came to be known as “rank and yank.” Every year, managers of each department had to rank their employees into three groups, the top 20 percent, the middle 70 percent, and the lowest 10 percent. Then, the bottom 10 percent were fired. One former employee called GE the “Pac-Man model. Just eat up companies. Acquire growth.”

In one revealing observation, Gelles writes: “What made Welch’s spasm of downsizing [strange] was the fact that GE could have easily afforded to keep the employees in Louisville, Schenectady, and elsewhere on the payroll. GE was more profitable than all but nine other companies in the Fortune 500.”

One fascinating part of this brisk-reading 264-page book, is Gelles’ discussion of how GE created its own elite training school “for up-and-coming stars, a retreat where white-collar gladiators could hone their skills.” It was known as Crotonville, a campus, notes Gelles, that was spread across 52 acres in the peaceful town of Croton-on-Hudson, just north of New York City. It was built in the 1950s and soon became the place for non-GE middle managers to go and learn how to run their own business using GE’s novel organizational models. Welch changed that by transforming the “dowdy corporate training center” into a place more like a “private club, a place where the company’s best wanted to see and be seen.” Speedboats, indeed.

Remember Harry Stonecipher? He was a former GE executive who as Gelles explains, “studied at Welch’s knee.” He later went on to run, beginning in 1994, McDonnell Douglas, which Boeing in 1997 acquired for $13.3 billion. “As chief executive, Stonecipher slashed expenses and drove up the stock price,” Gelles writes. “One of the few investments he made was buying a French-style country chateau on 286 acres outside of St. Louis, which he turned into his own version of Crotonville.”

On March 1, 2020, one day after Welch died at the age of 84, Gelles finally sat down at the Boeing Leadership Center for an interview with David Calhoun, Boeing’s current CEO. “This [the Leadership Center} was built in his image,” Calhoun said. “It was built by ex-GE people in the image of Crotonville under the notion that that’s what it would be used for. So, we’re going to reinvigorate that in every which way I can think of.”

Gelles continues: “Calhoun, who had been paid huge sums of money during his career, and who, as member of the [Boeing] board that had approved Muilenburg’s compensation, criticized the former CEO for aggressively pushing to increase production of the MAX. ‘I’ll never be able to judge what motivated Dennis [Muilenburg], whether it was a stock price that was going to continue to go up and up, or whether it was just beating the other guy,’ [Calhoun] said. He added later, ‘If anybody ran over the rainbow for the pot of gold on stock, it would have been him.’”

Ellis Conklin
Ellis Conklin spent decades as newspaper man, mainly in Los Angeles, Seattle and St. Louis, having worked at the Los Angeles Herald Examiner, United Press International as a national feature writer, and the Seattle Post-Intelligencer. At long last, he and his wife settled in Manzanita, Oregon. Here, Ellis continues to root for his beloved San Francisco Giants.
Previous article
After 15 Years, the Episcopal Bishop of Olympia Decides to Retire
Next article
How Seattle Built a First-Rate Chamber Music Festival