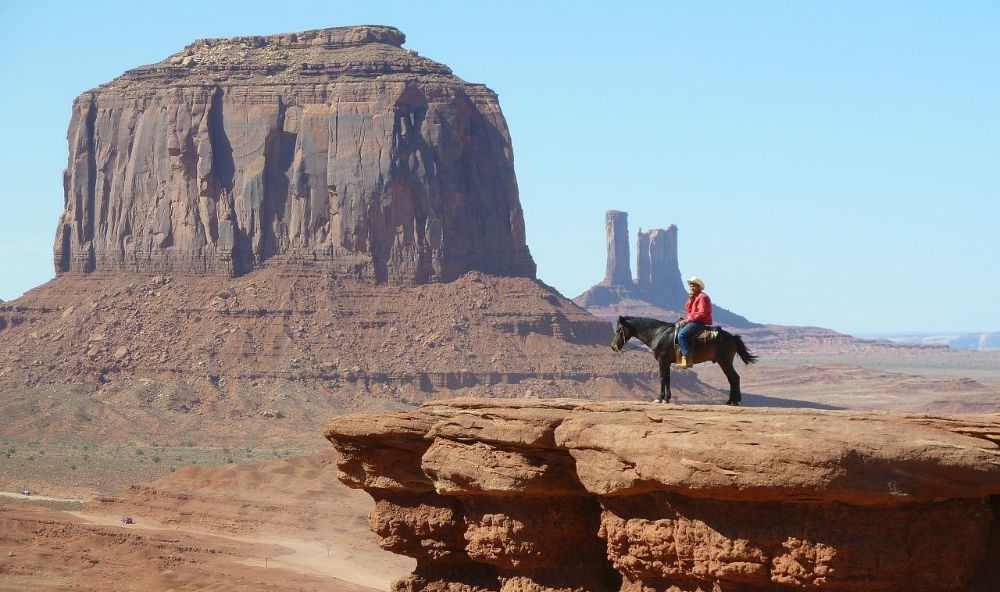 We drove down to Imnaha, Oregon the other day. Imnaha is a tiny town on the remote eastern side of Wallowa County. Since Wallowa County is itself pretty remote, up in the far northeastern corner of Oregon,  Imnaha is remote squared.

Still, it’s a picturesque little place on the beautiful Imnaha River. It has a tiny post office, a small elementary school, and a little store/tavern where you can get an update on the annual rattlesnake contest (who has dispatched the biggest snake this year) and read funny signs like, “Beer . . . because your friends just aren’t that interesting.” The Imnaha Canyon lands, which are just now as green and lush as I’ve seen them, are gorgeous.

At the store/tavern they have a couple TVs tuned to a station that runs all westerns all the time. That means programming from the 50s when men were strong, women were good looking, kids were perfect — and everybody who mattered was white, straight, and righteous. If you’re wondering what “Making America Great Again” really means, it’s right there in black and white. Of course, this version of American greatness is more fantasy than reality, since the 1950s also meant segregation, McCarthyism, and the Cold War.

Somehow the narrative of 1950s America, refracted through the prism of westerns, became the norm for “the real America.” As such, it has a hold on us that may be crippling. At least that is the argument of Yuval Levin, a writer whose work I admire. Levin’s recent op-ed in The New York Times asks, “Why Are We Still Governed By Baby-Boomers and the Remarkably Old?”

It’s not just Joe Biden who is remarkably old. Trump is too. So are Nancy Pelosi (82) and Mitch McConnell (80). Senators Diane Feinstein and Chuck Grassley are pushing 90. Levin has a point. A time comes to move over and move on (way to go Justice Stephen Breyer), and for most of these people it happened a decade ago, or more.

But Levin’s argument goes deeper than noting how old many of our nation’s leaders are. He argues that there’s a narrative operative in our culture that treats the post-war period as a norm — a golden age — and that is a problem in all sorts of ways. By constantly looking back to those sorta-good old days we blind ourselves to what wasn’t good about them, and we focus on the imagined past not the real present and future.

“Above all, though, our Boomer sense of ourselves keeps us from orienting our society toward the future, and contributes to a broadly shared sense of despair about our country that is neither justified nor constructive. Our politics should prioritize planning for greater national strength in the medium term, but we can hardly expect quarreling octogenarians to have that future clearly in mind.”

Another problem of the Golden Age is that, after it, nothing else is good enough. If you are part of the tribe known as “mainline Protestant,” this is not news. The post-war era was our time of cultural dominance, our “golden age.” We were the default religious option. Our churches had huge youth programs, tons of kids in Sunday School. Presidents like Dwight Eisenhower were deferential to us. In 1954 Ike laid the cornerstone of the “Inter-church Center,” the mecca of ecumenical Protestantism, a.k.a. “the Godbox,” and urged everyone to “attend the church of your choice this Sunday.”

When things started to change and go south for those churches/denominations in the ’70s the solution for way too long was always some version of a return to the Golden Age. “If we just get the right minister,” “put the right program in place,” happy days will be here again.

That Golden Age myth still has a grip, not just on the churches, but on the whole country through its octogenarian leaders. The playwright Tennessee Williams once observed, “Success and failure are equally disastrous.” Beware the Golden Age, the Good Times, the Happy Days.

For many of us who grew up in the ’50s and ’60s we took, as people are inclined to do, our childhood as a norm for how life is supposed to be. That gave many of us an unrealistic picture of what to expect of life. It taught us to think, for instance, that things would always get better, year after year, decade after decade, as “Progress” unfurled its banner ever more widely. The idea was that we were on the cusp of a new and improved humanity. It may be enticing to hear, but it doesn’t prepare you well for the real world where sin and evil have a remarkable persistence.

Levin, happily, doesn’t fall for the old canard, “the youth are our hope.” In fact, he says Gen-Z for the moment, is as unhelpful as the old. He counsels, of all things, looking to the middle-aged.

Two cheers then for Gen-X and older Millennials. Your time has come. And the grip of the old westerns, and the fantasies they funded, are way past their “sell by” date.

Anthony B. Robinsonhttps://www.anthonybrobinson.com/
Tony is a writer, teacher, speaker and ordained minister (United Church of Christ). He served as Senior Minister of Seattle’s Plymouth Congregational Church for fourteen years. His newest book is Useful Wisdom: Letters to Young (and not so young) Ministers. He divides his time between Seattle and a cabin in Wallowa County of northeastern Oregon. If you’d like to know more or receive his regular blogs in your email, go to his site listed above to sign-up.
Previous article
The Most Interesting Governor’s Race in the Country This Year?
Next article
Flay and Flatter: Tina Brown Does the Royals