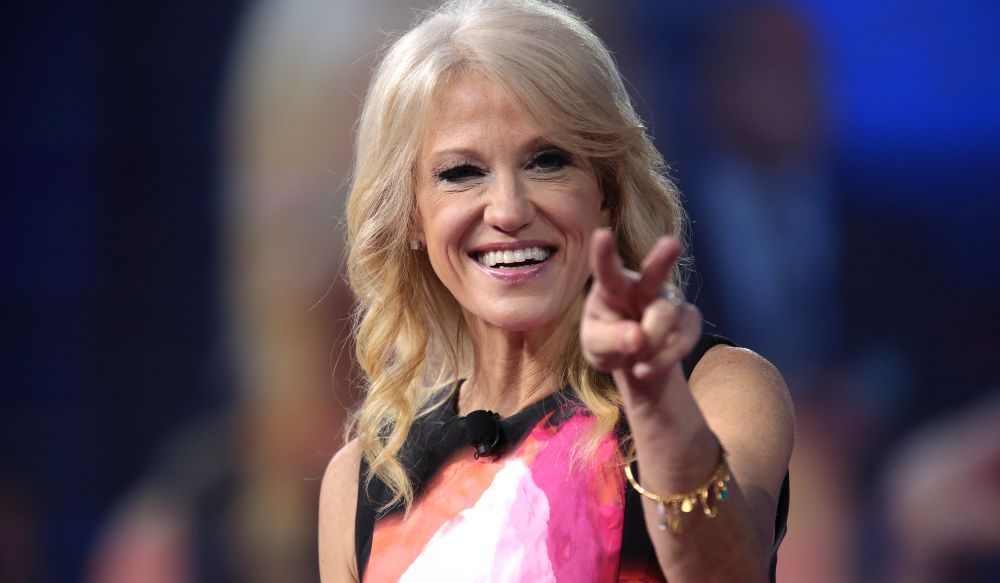 The new book, Here’s the Deal, billed as “a look behind the headlines,” would be better described as Kellyanne Conway’s self-promoting, score-settling memoir. It’s a 500-page trip into the land of Trump and the author’s “alternative facts.” For anyone suffering what Conway calls TDS (Trump Derangement Syndrome), it is painful, which may be why the book hasn’t sold well (25,000 the first week, versus Mary Trump’s 1.39 million).

Born Kellyanne Fitzgerald, she was raised as the only child in a household of four strong Italian-American women: her grandmother, mother, and two unmarried aunts. (Her Irish-American dad departed when she was three.) The “Golden Girls,” the four DiNatale women, were part of a close, extended family in Atco, a small town in South New Jersey halfway between Philadelphia and Atlantic City. Kellyanne was their star, an overachiever who aced her studies at St. Joseph High School, excelled at athletics, sang in the choir, and was elected Blueberry Pageant Princess. Her memoir neatly omits the fact that her maternal grandfather who didn’t live with them was  identified by the 1992 New Jersey Organized Crime Commission Report as Jimmy (“the Brute”) DiNatale, an associate of the Philadelphia crime family.

Following her years at Trinity College, Kellyanne worked in Washington, D.C., first as a congressional intern and then as a staffer. Later she enrolled and graduated from George Washington Law School. She briefly clerked for D.C. Superior Court Judge Richard Levie, but then went to work in polling, eventually founding her own agency: the polling company (all lower case).

To hear her tell it, no one worked harder at polling. She had political clients (Dan Quayle, Newt Gingrich, and then-Rep. Mike Pence) and also consulted for business enterprises like Martha Stewart Living and Major League Baseball.

Kellyanne Conway was still single in her 30s when her friend Ann Coulter introduced her to George Conway, a successful New York lawyer. They had a whirlwind courtship and over-the-top wedding, complete with a blessing from Pope John Paul II. Continuing as president and CEO of her polling firm while giving birth to four children, Kellyanne (now Conway) became acquainted with Rebecca Mercer and went to work for the Ted Cruz PAC. When Cruz dropped out, she signed on with the Trump campaign, advising him how to appeal to women voters. Then in August, 2016, Trump fired Paul Manafort, his second campaign manager, and offered the job to Kellyanne.

As the first woman to manage a major presidential campaign, it fell to Kellyanne to target swing states, help with debate prep and navigate troubled waters. No moment was more troubled than after the Access Hollywood tape surfaced, finding many Republican National Committee members ready to dump Trump. Kellyanne claims she convinced him that, if he dropped out, he’d be a “quitter” and, although he’d probably lose to Hillary Clinton, he might as well stay the course, dismissing the tape as mere “locker room talk.” On election night, they prepared to concede; but, to the surprise of many, Trump came away with a win.

During the transition, Trump pressed Kellyanne to be his press secretary. Instead she accepted the job of presidential counselor. She came aboard, competing for the president’s ear with the trio she called “the three stooges,” chief of staff Reince Priebus, adviser Steve Bannon (the man with three shirts and three cell phones), and son-in-law Jared Kushner. She knocks them, saying they had “but one brain among the three of them.”

Kellyanne was the one who, more often than not, was sent out to repair the multiple messes made by the president’s men. It fell to her to defend press secretary’s Sean Spicer’s claim that Trump’s inauguration drew “the largest crowd ever.” Kellyanne said Spicer was using “alternative facts.” She claims it was a tongue slip and she’d meant “alternative information.” She asserts Spicer conflated the live audience with numbers of TV watchers.

She brags about the times she had to appear — half prepared and without a safety net — on multiple news shows defending presidential gaffes. In defending her boss, she stepped into quicksand more than once. After Trump’s ill-considered Moslem ban, she cited the so-called “Battle of Bowling Green,” a nonexistent event somehow connected to arrests of two Iraqi refugees. On multiple occasions, she flaunted the Hatch Act that prohibits civil servants from engaging in partisan and commercial activity.

Kellyanne was so outrageous in her appearances — much beloved and approved by her boss — that she was periodically banned from TV talk shows and interviews. But the prohibitions were short-lived, since there were too few willing spokespersons for The Donald.

The latter half of her memoir delves into the rift between Kellyanne and her husband George as he changes from a MAGA-hat-wearing Trump supporter into one of the architects of the anti-Trump Lincoln Project. She reports her extreme discomfort when the man she married spends his time undermining the man she works for. George tells her “you work for a mad man.” Trump tells her she is married to “the husband from hell.”

The notorious marital split prompted Ivanka Trump to hand Kellyanne a post-it note with the names of two marriage counselors. Meanwhile, Claudia, the couple’s teenage daughter, took to her TikTok to rail against her mom. Claudia threatened to seek “legal emancipation” before finally walking back her discontent.

The need for attention to her children is Kellyanne’s rationale for her September, 2020 departure from the White House. She tells of the family’s move to Alpine, New Jersey (in the state’s northeast corner), and her revived life as a mom. Dragged back for debate prep and for the Amy Coney Barrett confirmation, she couldn’t resist critiquing the 2020 campaign. She cites the early profligate spending that left the campaign with little for the final days.

Kellyanne says she told Trump, “You know you lost.” (It’s an exchange he disputes.) In her final chapters, she reports how good she feels about motherhood and launching a new firm, KAConsulting. She says she “will always love George even if I don’t fully understand what happened.” She deplores his obsession with Tweets — 90,000 of them. But she’s ever the optimist when she concludes, with her usual quotable line: “Democracy will survive; America will survive; George and I may not.”

Jean Godden
Jean Godden wrote columns first for the Seattle Post-Intelligencer and late for the Seattle Times. In 2002, she quit to run for City Council where she served for 12 years. Since then she published a book of city stories titled “Citizen Jean.” She is now co-host of The Bridge aired on community station KMGP at 101.1 FM. You can email tips and comments to Jean at jgodden@blarg.net.
Previous article
Coming to Terms with Vaccination
Next article
The Real Duwamish