Tom Robbins’ Long Lost Commencement Address: “Adults are Nothing but Tall Children Who Have Forgotten how to Play”

When I was the editor of the newspaper in Oak Harbor nearly 40 years ago, I was given a copy of a commencement address by author Tom Robbins that was delivered to a handful of graduates at the Off Campus School in Oak Harbor on June 7, 1974. The Off Campus School was an alternative for students who previously dropped out of regular high school. Press reports called the program “hotly controversial.”

I tucked the speech away back then and recently found it in my files. I wondered how Robbins came to be on Whidbey Island that night. The Off Campus School commencement was a very small event — graduates numbered just 20. And at the time, Robbins was already well-known. His 1971 book, Another Roadside Attraction, which described the discovery of the mummified body of Jesus Christ at a highway zoo and hot dog stand, was a best seller and his second, Even Cowgirls get the Blues, was in the works. And Oak Harbor was and still is a generally conservative community shaped by the naval air station on its doorstep and the Dutch Reformed Church to which many of its original settlers belonged.

So, Robbins was an unlikely person at an unlikely event, but nonetheless, there he was, in the flesh, talking to graduates who didn’t fit in at regular school. Robbins took to the podium at the Surf and Sands Country Club on that night in 1974 and began:

“I am often asked whether there is life after death. Certainly, there is. There is also death after life, and life before death, and death after life. It goes on forever. There’s no stopping it. You will live forever and die forever. In fact, you already have.”

“One problem with the notion of Heaven and Hell,” Robbins continued, “is that although they are exact opposites, an astonishing number of people seem to be confused about which is which. For example, all over the United States on this very evening, commencement speakers are standing before audiences not greatly unlike yourselves describing hell as if they were talking about heaven.

“Their speakers are saying things such as, ‘Graduating seniors, you have reached the golden age of maturity; it is time now to go out into the world and take up the challenge of life, time to face your hallowed responsibility.’

“And if that isn’t one hell of a note, it’s certainly one note of hell.

“When I hear the word maturity spoken with such solemn awe, I don’t know whether to laugh or get sick. There circulates a common myth that once one becomes an adult, one suddenly and magically gets it all together. And, if I may use the vernacular, discovers where it’s at. Ha ha. The sad funny truth is adults are nothing but tall children who have forgotten how to play.

“Because as long as you keep growing, you keep changing, and the person who is changing is unpredictable, impossible to pigeonhole and difficult to control. The growing person is not an easy target for those guys in slick suits who want you to turn over your soul to Christ, your heart to America, your butt to Seattle First National Bank and your armpits to the new extra crispy Right Guard.

“No, the growing person is not an ideal consumer, which means, in more realistic terms, he or she is not an easy slave. Worse yet, if he or she continues to grow, grows far enough and long enough, he or she may get too close to the universal mysteries, the nature of which the Navy and the Dutch Reformed Church do not encourage us to ponder. The growing person is an uncomfortable reminder of the greater human potential that each of us might realize if we had the guts.

“So, society wants you to grow up to reach a safe, predictable plateau and root there. To muzzle your throb. To lower the volume on the singing in your blood. Capers all cut, sky finally larked, surprises known: SETTLE DOWN —  settle like the sand in the bottom of an hourglass, like a coffin six months in the ground. Act your age, which means act their age, and that has, from the moment they stopped growing, always been old.”

People who graduated from high school in the 1960s and early 1970s remember it as a time of great unrest. Robert Kennedy and Martin Luther King were gunned down. The disaster of the war in Vietnam rolled on and the casualties mounted. Universities exploded in protest. Soldiers opened fire and killed students at Kent State. Cambodia was bombed. Black civil rights marchers were hosed by police and beaten with batons. And as Robbins spoke, the walls were closing in on President Richard Nixon, the fall of Saigon was a year away, and everywhere people grappled with a loss of faith in government and social institutions. And Robbins lashed out.

“Growing up is a trap.

“As for responsibility, I am forced to ask, responsibility to what? To our fellow man? Two weeks ago, the newspapers reported that a federal court had ruled that when a person’s brain stops functioning, that person is legally dead, even though his or her heart may continue to beat. That means that 80% of the population of the Earth is legally dead. Must we be responsible to corpses?

“No, you have no responsibility except to be yourself to the fullest limit of yourself. And to find out who you are. Or perhaps I should say to remember who you are. Because deep down in the secret velvet of your heart, far beyond your name and address, each of you knows who you really are. And that being who is true cannot help but behave graciously to all other beings – because it is all other beings.

“Ah, but we must be responsible, and if we are, then we are rewarded with the white man’s legal equivalent of looting: a steady job, a secure income, easy credit, free access to all the local emporiums and a home of your own to pile the merchandise in. And so what if there is no magic in your life, no wonder, no amazement, no playfulness, no peace of mind, no sense of unity with the universe, no giggling joy, no burning passion, no deep understanding, no overwhelming love? At least your ego has the satisfaction of knowing you are a responsible citizen.

“The only advice I have for you tonight is not to actively resist or fight the system, because active protest and resistance merely entangles you in the system. Instead, ignore it, walk away from it. Turn your backs on it, laugh at it. Don’t be outraged, be outrageous! Never be stupid enough to respect authority unless that authority proves itself respectable.

“So be your own authority, lead yourselves. Learn the ways and means of the ancient yogi masters, pied pipers, cloud walkers and medicine men. Get in harmony with nature. Listen to the loony rhythms of your blood. Look for beauty and poetry in everything in life. Let there be no moon that does not know you, no spring that does not lick you with its tongues. Refuse to play it safe, for it is from the wavering edge of risk that the sweetest honey of freedom drips and drips. Live dangerously, live lovingly. Believe in magic. Nourish your imagination. Use your head, even if it means going out of your mind. Learn, like the lemon and the tomato learned, the laws of the sun. Become aware, like the jungle became aware, of your own perfume. Remember that life is much too serious to take seriously – so never forget how to play. Looking at you tonight, I know you are going to do just fine.”

Today, Robbins lives in La Conner and is nearing 90 years old. I heard he only responds to written letters, so I sent him a copy of the speech and asked him how he came to be in Oak Harbor that night and what he thinks about his speech now. He graciously responded:

“Your epistle has caught up with me (or me with it) in this little clam-cawed outpost where I continue to follow the Charmer’s pipes down oblique paths of … well, I’m unsure if there is a fitting name for it. In any case, I’m happy to be here (and Here) and both surprised and cheered to be reminded of the one and only high school commencement address I have ever delivered. I must confess that it pleases me to discover that the speech not only fails to redden my cheeks, but actually provokes a kind of prideful grin.”

Robbins said he was invited to speak at the event by a woman he was romantically involved with at the time who had friends in the graduating class. Robbins added:

“It produces a tiny tingle of pleasure to learn that there may be people who can still recall that event and my contribution to it. (The statute of limitations would protect me, I suppose, from any belated accusations of contribution to the delinquency of minors.)”

I checked Oak Harbor’s newspaper, the Whidbey News-Times, which is preserved on microfilm at the Washington State Library, to see if a reporter covered the commencement address. A very helpful librarian at the state library wheeled through the microfilmed newspaper pages for June 1974 and found a story and a blurry photo of students with Robbins. The story was long on explaining what the Off Campus School was and how its future was threatened, but it was short on the substance of Robbins’ address. Although the speech has surfaced here and there over the years, most of the words Tom Robbins spoke that night echoed only in the ears of those 20 graduates – until now.

“Let me wrap this up with a few short questions I am often asked.

1. Will we be eaten by bugs and worms? We ought to be. We have eaten and we ought to be eaten. This is Justice and there is no stopping it. If you have your body burned, starving the earth to glorify a memory, you are asking for trouble. I have no idea what form the trouble might take, but I do know that if you are too good to be eaten by bugs and worms, you are asking for trouble.

3. Is Jesus coming back? Yes, all the time. And so are you. All souls echo forever throughout the universe.

I hope you have a wonderful trip.” 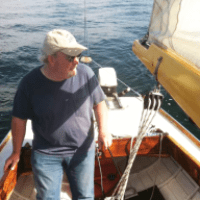 Fred Obee
Fred Obee is a long-time journalist at weekly and small daily newspapers in the Pacific Northwest, including the Port Townsend Leader, where he was a reporter and ultimately the general manager. He resides in Port Townsend.
Previous article
How the Supreme Court Lost the People’s Confidence
Next article
Ukraine End Game: A Stalemate Between Peace and Justice?