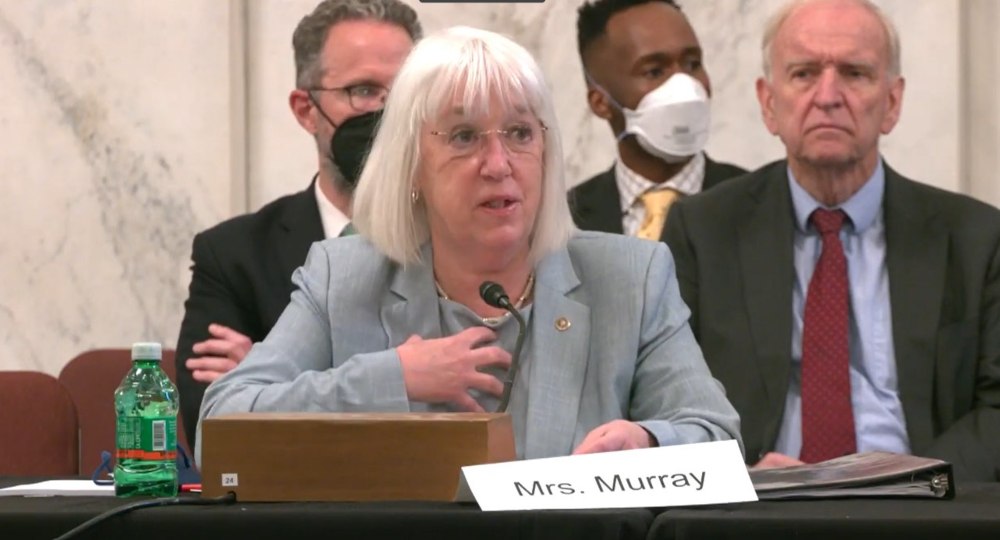 Sen. Patty Murray stood in trademark tennis shoes in front of the Senate chamber on Wednesday, hands clasped behind her back as Republican colleagues and one Democrat blocked legislation to codify the right to abortion for American women.

A longtime champion of choice, Sen. Murray has sought to organize and galvanize the Senate’s Democratic women in pushing abortion rights to center stage in America’s political debate, in wake of a leaked draft opinion in which a Supreme Court majority appears ready to overturn the court’s 1973 Roe v. Wade decision.

The abortion issue is the latest signal to our polarized politics.  All 50 Republican senators voted to block the abortion bill, and only one Democrat, Sen. Joe Manchin of West Virginia, joined them.  The Washington congressional delegation is likewise split down party lines. Even the two GOP House members who voted to impeach President Trump are firmly in the anti-abortion camp.

“Extreme politicians should not have a say in a woman’s personal decisions about her family and future,” said a tweet by Murray, posted as the Senate prepared to vote.  But from Rep. Dan Newhouse, R-Wash., under fire for his impeach-Trump vote, came this message: “With the possible Supreme Court overturn of Roe vs. Wade, will you join the fight for life?”

While the U.S. Senate stood down, both King County Council and Seattle City Council passed memorials endorsing Roe.  After a whopping 20 “Whereas” clauses, county lawmakers delivered a message: “The council declares its support of a woman’s right to reproductive freedom and of Roe vs. Wade as settled law of the land.”

The wordy county resolution passed by an 8-1 margin.  The lone dissenter was Councilmember Reagan Dunn, a Republican who is challenging a vulnerable Democrat, U.S. Rep. Kim Schrier, in the 8th District. The district spans the Cascades from suburban-exurban King County to conservative Kittitas and Chelan Counties.

If you missed the movie “Twister,” watch what Dunn does on the abortion issue.  His mother, the late U.S. Rep. Jennifer Dunn, was a Reagan Republican but pro-choice.  Asked his stand while greeting fellow guests at the Slade Gorton memorial service, Dunn said he “shares my mom’s position,” but with restrictions.

Schrier, a pediatrician, has described the draft opinion by Supreme Court Justice Samuel Alito as “a dark day for women, and shocking for women older than me who lived through a time when this right was not constitutional.”

Washington voted to legalize abortion in 1970, three years before Roe v. Wade, and strengthened abortion rights in 1991. Poised to make legislative gains and pick up Schrier’s House seat, Republicans are hitting hard at inflation and crime while giving a back seat to culture wars.  Dunn has taken to passing out “Re-fund the Police” stickers.  Larkin ran videos of street violence in TV ads against AG Bob Ferguson.

While forcing members of the Senate to take a stand, the Democrats’ response to Justice Alito’s blunt opinion debunking Roe has lacked coordination.  The right wing has coalesced behind a party line of being shocked – shocked!!! – that the opinion leaked, and denouncing pro-choice protests as rowdy and threatening.  Fox News has bannered protests at Catholic churches.

“Where the hell is my party? Where is the counteroffensive?” asked California’s Democratic Gov. Gavin Newsom, announcing pro-choice measures in his state. Next door in Nevada, Sen. Catherine Cortez Masto is up for reelection this year and one of the Democrats’ most endangered incumbents.

Which is where Murray comes in.  She is more insular than the “mom in tennis shoes” we elected 30 years ago, and faces a vigorous, vociferous challenge from Republican Tiffany Smiley, a former nurse and veterans advocate from Pasco. Smiley has declared herself both “pro-life” and “pro-woman” but recently told The Seattle Times that the abortion issue isn’t relevant to the Senate race because Washington voters have already spoken.

Murray has been an energetic, passionate advocate on issues of women’s health. The first Senate speech she ever gave was about ovarian cancer and the need for commitment of federal dollars.  She has used news conferences, often held at Planned Parenthood’s clinic on Madison Street, to decry Republicans’ proposed abortion restrictions and anti-choice nominees to the Supreme Court.

Murray is reportedly working with Senate women on strategies for keeping the choice issue front and center.  A Washington colleague, Rep. Suzan DelBene, took aim at Alito’s opinion this week, saying:  “The disdain and disrespect for women is palpable throughout the draft decision and we cannot allow our country – that was founded on freedom and liberty – to fall backward.”

A new CBS News poll has shown that Americans, by a two-to-one margin, support the Roe v. Wade decision . . .  even as 13 Republican-run states have enacted “triggering” laws in which abortion will become illegal if the Supreme Court tosses out the half-century-old ruling.  Senate Minority Leader Mitch McConnell has hinted that further restrictive federal legislation may be in the offing if Republicans take control of the Senate and House.

“Republicans want a ban on abortion,” Sen. Maria Cantwell said in a Senate speech this week.  “And if the Supreme Court and Senate Republicans have their way, they will succeed.”  The GOP, she added, would yank reproductive health care back to “the Dark Ages.”

In his draft opinion, Justice Alito said decisions on abortion policy should go back to states and legislatures.  The opinion offers a bit of an “out” to our state’s Republicans, who can – and do – argue that the issue is settled here, abortion will remain legal, and nothing will change..

Rep. Cathy McMorris Rodgers, R-Wash., has spoken at abortion opponents’ annual March on Washington in January.  After the outing of the Alito opinion, she told KHQ in Spokane: “I would like to see a protection of life. I believe life should be protected.  I’d like to see each state make the decision, I’m pleased that the court is reviewing (Roe v. Wade).”

If Roe goes, the Inland Empire – which McMorris Rodgers represents in Congress — may get a paradoxical new notoriety. It stands to become a destination and refuge for Idaho (and possibly Montana) women seeking abortions in Eastern Washington when abortion becomes illegal in their states.

Not if Sen. Murray can help block such balkanization. She is energized, but faces the challenge of energizing America’s voters.

This article first appeared in “Cascadia Advocate,” the newsletter of the Northwest Progressive Policy Institute.